author=Arandomgamemaker
If only it wasn't on the Wii U ;-;

Lemme tell ya a secret, buddy.

Close
02/05/2014 01:06 AM
Oh, and here I thought you were complaining about not having a Wii U and not being able to play it, while you're actually complaining about how the consoles' controls aren't suitable for the game. Oops.

Now that I think about it, that's a valid complaint. I hadn't even thought of that.
Roden

Not to mention the Wii U controller is fucking beautiful anyways but w/e. If you can play Brawl with a fucking Wiimote I'm sure it'll work fine.
Arandomgamemaker
1629

Close
02/05/2014 04:05 AM
See, that's the problem. The Wiimote is god-awful for competitive games like this. That's why people use Gamecube controllers still with Brawl.
MajoracanKing

Close
02/05/2014 03:56 PM
I just watched one episode of Happy Tree Friends. It's probably one of the more messed up shows I've seen. I'm traumatized.
MajoracanKing


Get it right before it goes wrong.
zacheatscrackers 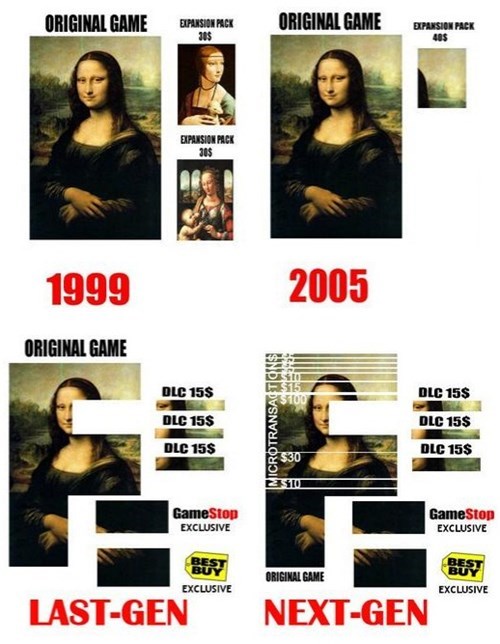 It's part of Mona Lisa's head. In other words: more of the same.
Mr_Detective

Close
02/06/2014 06:35 AM
Uh, I don't know. I wasn't playing PC games back in 2005. But I could say that Arkham City's Harley Quinn's Revenge is just that.
More of the same isn't always bad mind you, but it's easier and cheaper to make than a fresh and original quest.
LockeZ

Close
02/06/2014 07:53 AM
The expansion pack to Warcraft 3 would be a good example. Multiplayer mode had a few new units for each faction that canceled each-other out, and basically no other differences. The new stuff in the campaign mode was really good, but wasn't what most players were primarily interested in.

The expansion packs to Warcraft 2 weren't noticably better, though. So the image is a little silly.

I guess Counterstrike is an example of an expansion pack circa 1999 that was practically an entirely new game.
Corfaisus