Those of Strong Moral Fiber Need not Apply

Story: A depraved, twisted tale about a hitman who will kill anyone, cult leaders who get their kicks in ways that will make your stomach churn, and the cop who's got nothing to lose that going to catch them. You start the game as an "enforcer" whose job is to recover the stolen Grimorum, a Lovecraftian McGuffin of incredible evil. Your job is simple: kill the thief, and his wife and children, and the game goes into gory detail. When you fail to recover the Grimorum, a race is kicked off to make sure you can get it back to the cult, but after your murder victim's prediction that you're living on borrowed time seems to be confirmed, you start to question if working this cult is the wisest career choice. In a move that reminds me a bit of Heavy Rain, you play as both the protagonist and the villain. 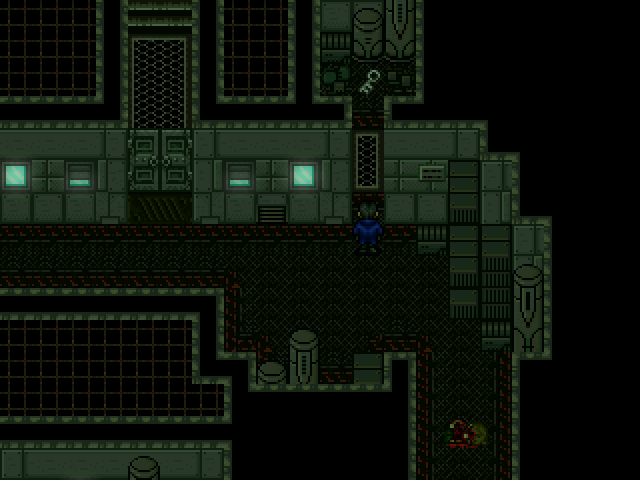 This is not where I killed this man. This glitch wouldn't be worth mentioning except it is annoyingly inconsistent.


Writing: The storytelling is fantastic, which one could only come to expect from any Red-Cube game. One need only look at Nightmare Johnny or Wartools for more incredible examples. Unfortunately, this game does partially inherit one of Wartools' problems: overlong cutscenes. Fortunately, Grimorum is nowhere near as expositive as Wartools, though. Of course, with a story this involved, there is a need for some cutscene length. I just feel like they could be trimmed. A good example is the witness questioning in the first cutscene we have with the policeman. They really didn't know anything or give us information. Was it really necessary to spend so much time with them that it took 45 seconds to quick hit the enter key through them? Be warned: the story, scenes, and a lot of the things you'll be asked to do in the game are depraved to the nth degree. 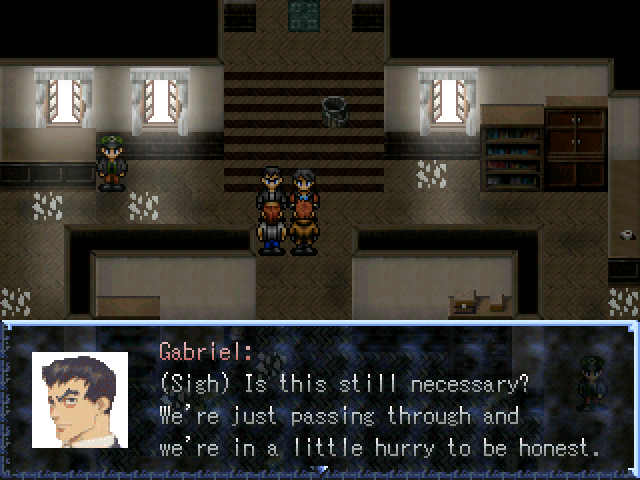 For people that don't know anything, you sure spend an awful lot of time talking to them.
And is that the same walking sprite as the hitman?


Gameplay: Another of Red-Cube 2003 games, and this one breaks the 2k3 engine so hard, you wonder why he doesn't use Game Maker or Unity. Maybe he likes the challenge, but seriously, one of those two would save you a ton of time and work. This is not an RPG. This is a top-down action shooter, like Wartools. This one even goes a step further. You have armor, can carry multiple weapons, can cycle through them with the number's key like Doom or Wolfenstein and attack detection is actually well done, though it is still slightly glitchy. If you shoot too fast, the game will spend the ammo, but won't register all of the hits, even though you clearly hit. Also, even shooting slowly, one in every four shots fails to hit even though you're in line with the target. Game progression is simple. You have to kill someone, or kidnap someone, and you carry out the mission until the end of the level, or you have to find clues to the murderer, trying to track down a cult, trying to understand the Lovecraftian horror that you've fallen into. Other than the minor glitch, I have no real criticism. I didn't know you could reload the gun until I asked, but I'm sure I only missed that point in the menu. I'm simply amazed that anyone would make a game like this on RPG Maker when it's so involved that it would probably take significantly less programming knowledge and work to do it on a more versatile system. Then again, I guess I can relate. I have moments where I try to break RPG Maker's system, too, just to see if I can make a new combat engine. Vega Legacy is an example of that. 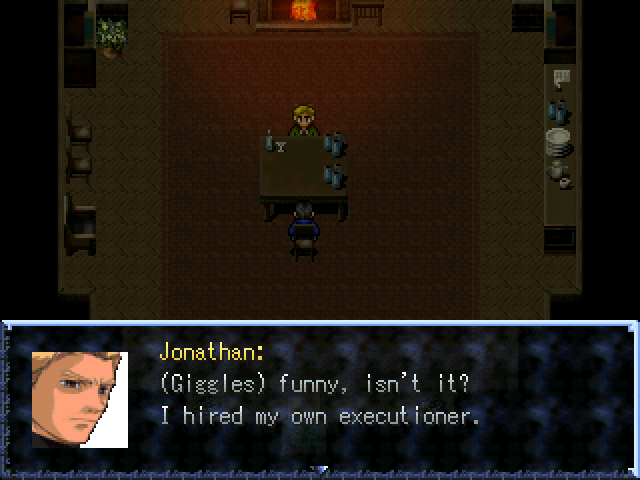 Your definition of funny greatly differs from mine.


Graphics: I have no idea where these came from, but based on the face chip of Elly Van Houten from Xenogears and the wildly diverging art styles between face chips, I'm going to go out on a limb and say that they're probably ripped.

Sound: I couldn't name where any of the music came from, and won't be able to until I make it to the end and see the end credits unless that information is listed somewhere else that I haven't looked (that could easily be the case).

Conclusion: I enjoyed this game, and I like the story. There was nothing in this game that turned me away in the slightest. That said, I can absolutely say that it needed a trigger warning. There is extreme violence, which is enough to turn off some people, but the game has the player commit violence on children. In fact, there's actually quite a bit of violence on children in this game. I want to recommend this game, except a significant portion of the people I would recommend it to would be quite upset by it. Though there are some sexy (and depraved) scenes, none of the cross the line into nudity, so the game's not actually trying to break the site's reasonable rules, but this game definitely isn't for everybody. Personally, I give it four stars. I'd give it more if the dev consistently used resources that went with each other. They mostly do, but there are a few graphic resources that are divergent enough to be really jarring when you see them. I'm sure you can see how different the facechip of the witness is from Jonathan's facechip in the screencaps I took. I'd also like to see cutscenes trimmed a little. They weren't all bad. The scene where the blue haired girl and her girlfriend (I HAD BEST NOT DESCRIBE THIS SCENE), while perhaps not essential to the story, was to the point and really established their characters (this was a really well-written scene and I hate myself for liking it), but there were quite a few scenes that could have stood to have some fat trimmed off. So, as for whether or not you'll enjoy this game? You will, if you can get past a lot of icky stuff. Just...you've been warned.

Close
04/21/2018 11:56 PM
Thanks a lot for reviewing my game. Great article by the way. I had a good laugh about myself at some points because I can very well understand how your experience must have been.

I heard about Heavy Rain much later but I was heavily inspirated by the Dooms Series by Mr.Big T.

Well, if you think the cutcenes are long, you should've seen the original version. The whole WW2 scene was one giant cutscene until I decided to change it for good. But your complaints are very fittingly. I believe a good story is important but shouldn't stand in the players way. I'm still working on a way around that for further projects.
The cutscene with the two witnesses is actually just to relate to another game of mine. Back in 2009 I was working on another titel, which I paused for the original of Grimorum. The two brothers are the main protagonists of that one. I wanted to create one big universe consisting of three games and they exist. One is a demo and the other one is untranslated but hey, they exist.

Don't get me started about the engine. It wasn't meant to be but it still happened. I would rather used GameMaker but the self build engine was just not ready. So I tried my best with the rm2k3, even though it's quite unfitting for games like that.

There was a trigger warning, right at the beginning. I just tried to be a little creative with that one. Anyway, great review.
pianotm

And, no, I meant on the game page. The game page should have a trigger warning.
Pages: 1