"Liberty and Anarchy" is a short RPG developed by Fomar0153 over the course of two days. The game was intended to be a birthday present for Liberty, one of the moderators for RPGMaker.net. As a result, I'm going to feel like an ass for criticizing this game. On the other hand, this project suffers from a multitude of problems both big and small.

Story
Summary
On the story side of things you play as Liberty, a birthday girl, whose journeyed all the way to merry old England in order to get a birthday present from Fomar and Caz. Unfortunately it appears that Fomar and Caz have merely used the promise of the greatest birthday present ever in order to lure Liberty into their castle lair. And on some level I'm a bit disappointed by this. After all, any proper villain would clearly have a volcano lair. Even so, if Liberty wishes to mod for another day she'll need to be on the top of her game as she faces off against deadly dragons and scheming mages.

The game contains several spots where words are cut-off by improper word wrapping. An issue that was already pointed in a previous review by Frogge, but apparently this wasn't enough to convince the developer to go back and address this issue. While this isn't the worst problem in the world for the game to have. It does lower the game's presentation in my opinion.

The game also contains a notable mistake when it comes to word selection as well. After all, the player doesn't transition to the lair's roof when they press the Q key while standing on a rug, but transfer to the ceiling. Though, I'll admit this is the only time I really noticed a mistake like this within the game. On the other hand, the game's summary page includes a similar error where the developer refers to Fomar and Caz's lair as a "layer".

"Liberty and Anarchy" is intended to be a boss rush game. As a result, the game is meant to place a heavy emphasis on challenging battles in my opinion. Sadly, the game really isn't all that difficult. This is because you can rely on the same strategy in order to defeat almost every enemy in this game. This strategy being to utilize Liberty's ability to coat her weapon in poison and simply sit back and watch as the enemy dies while you hold your ground in Liberty's defensive stance. In fact, the only real positive this game's combat system has going for it in my opinion is that the ability to use the Q and W keys on the keyboard to switch between various stances. These stances offering the player various offensive and defensive buffs. As for why I like this so much, well it gives the game a unique flavor that helps it standout from the many other turn-based games on this site.

Visually the game is rather lacking in my opinion. I suppose this is to be expected to a certain extent. After all, this game was made over the course of two days in order to get out in time for Liberty's birthday. On the other hand, I can't help but notice how plain and boring the castle lair looks as well as how boringly standard the enemies are. To make matters worse the game leaves a bunch of black space on the side of the screen when you engage the various bosses. This is because the background used when engaging in combat is smaller than the game's screen. And while this isn't the worst issue to have in a game. It does hurt the game's presentation. 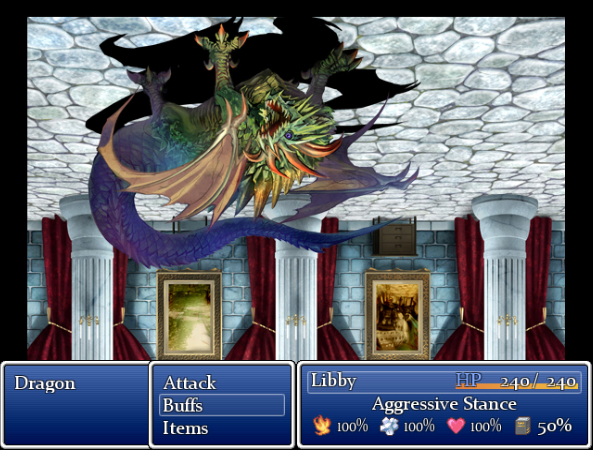 But seeing as how I'd like to end on a positive note when it comes to this section. I do like how the game flips the player's perspective when you engage with enemies on the ceiling.

It's possible to skip over the battle with Caz and simply move on to the game's final battle.

I guess, were on the hunt for Persians. After all, they do come from the blackness.

It's also possible on at least one map to escape the confines of the castle lair and simply walk around in the blackness surrounding it.

I have mixed feelings about this project. On one hand, I feel like if I give it a really low score I'd be making a major ass of myself. After all, this project was intended to be a birthday present and was put together over the course of two days. On the other hand, the game really doesn't have that much going for it in my opinion. As it stands, I'd recommend skipping over this game. Unless you really want to play as Liberty.

1 - Ceiling and roof amount to the same thing in most places. Sure, if you want to be pedantic you can point out they're different but it can mean the same thing depending where you're from. Especially if it's apparent that you mean INSIDE when saying it.

2 - The Caz battle is optional iirc. Because why would Libby beat up on her beloved Caz?!

3 - It's a fun interesting little game that can be completed very quickly and I recommend people play it, not only if they want to play as myself in game form, but also if they want to get some new ideas on how you can make something interesting with a bit of thinking outside the box.


I, for one, thought it was a baller game and enjoyed it. Roof walking, escaping boundaries and all. Then again, ya'll might think I'm being biased since it was a present, but play for yourselves and see just what a little imagination can do for ya.

(Also, I really hate the idea that someone is beholden to fixing something just because it exists with a few niggly issues. Or at all. Fomy, don't feel pressured into fixing it if you don't want to.)
thesacredlobo

author=Liberty
Ceiling and roof amount to the same thing in most places.

I'll have to add that one to my list of interesting factoids. I suppose its similar to how in a lot of places people don't differentiate between apes and monkeys and merely treat them as the same thing.

I'll openly admit that I like the idea of being able to change Liberty's stance in order to grant her various offensive and defensive buffs and debuffs. On the other hand, I can't deny that the combat in this game needs more tweaking. After all, you can basically win every fight in this game by simply staying in the defensive stance. At least if your willing to cheese out wins by poisoning the enemy.

author=Liberty
Fomy, don't feel pressured into fixing it if you don't want to.

I agree, he doesn't have to fix anything with this game if he doesn't want to. And there are some aspects of this game that would require more tweaking then it's worth in my opinion. After all, my biggest gripe with this game is just how repetitive most of the battles are. Though, I suppose some would argue it was my fault for taking advantage of just how powerful the defensive stance is in this game. As it stands, I hope Fomar0153 recycles the stance idea for another project. One where he has a bit more time to tweak the balance of the system in order to make it more engaging.

author=Liberty
Then again, ya'll might think I'm being biased since it was a present, . . .

I imagine everyone is biased when it comes to games. After all, your method for playing this game was probably different from mine. I know Frogge approached combat from an entirely different angle. After all, Frogge admits in his/her review that he/she never figured out how to switch between the various stances. So he/she was forced to approach every battle form the aggressive stance. While I spent almost all of my time racking up victories by sitting in the defensive stance while utilizing poison to slowly and effectively kill my enemies.
Pages: 1