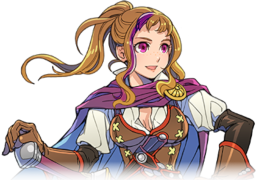 JUNEAU, the Purifier
“What would that have to do with me? I'm just here to kill monsters.”
Age: 23
Home: White Harbor, in South Nordenheim
Religion: Deist, but forced to recognize the Goddess
Favorite Meal: Anything pasta, but not with red sauce
Song: Vance Joy’s “Riptide”

Juneau, our heroine, has been chosen by a Goddess she does not care about in order to Purify the monsters that encroach on human settlements. Purification allows her to dissolve monsters into aether, returning them to the natural world. Normally, a Purifier will clean up around major cities, thus enabling the military to spread out and purge elsewhere. Then, the hero fades into obscurity…

Oh, but not Juneau. Upset at the lack of a Purifier for decades as her people were pushed from the frontiers of Nordenheim to the southern tundra, this wintry warrior has it out for all monsters, everywhere. Her plan is to Purify the Monster Lords, the twelve great beings that birth monsters in the first place. After all, with no Lord, the underlings must die off soon after.

Ultimately, Juneau is a hometown girl who isn't afraid to get a little dirty. She'll take the most direct route possible regardless of most consequences... or at least, she says she will. That confidence and bravado will have to be put to the test by the monsters of Gaia.

In battle, Juneau wields swords, spears, and shields to buff her allies and freeze her foes. She mostly plays support, with even her attacks aiding others’ kits. She learns new abilities by recruiting new party members -- Tal’hn’s advice to form a small army is a grand idea! Some example skills:

Winter’s Edge - Juneau attacks an enemy, usually inflicting Chill (-20% evasion) for two turns.
Frostbite - Juneau slashes twice. Hitting a Chilled target lets her immediately cast a Water spell upon all foes.
North Star - Juneau draws Aggro to an ally. If she has Tough (a defense buff), the ally gets it too.
Bonds of Fate - Juneau and an ally share all buffs between them.