"Bunker 9" is one of many games that was born out of the Theme Roulette 2 event. The goal of this game jam was to test the creativity of its participants by giving them a random image and word to build a game around. A challenge that Marrend appears to have tackled rather admirably. This is because the designs of the playable characters as well as the final boss are clearly inspired by the image he was given. And the word nefarious can easily apply to money grubbing bounty hunters or the cruel scientists that built Bunker 9 in order to carry out human experiments in order to find the source.

Story
Plot Summary
You play as a group of bounty hunters who've been offered a big pay day in exchange for shutting down a portal linking their world and another together. This portal is referred to as a demon's gate and if allowed to run freely for too long may allow for powerful demonic entities like Suzuka of the four saint beasts to cross into their world. Of course, in order to reach the portal they'll need to deal with the various entities that have come to call Bunker 9 their home.

Characters
While Kit and Fent are clearly inspired from the image this game was built around. I'm guessing King was based on Kaepora Gaebora from the Legend of Zelda series. This is because both characters are able to provide useful information to the player on where they are going as well as offer useful transportation skills.

Outside of that I don't have that much to say about the characters. We really don't get that much dialogue between Kit and Fent that helps me pin down their personalities. Though, I suppose it would be asking a lot of Marrend to craft characters that truly come across as three dimensional in a game that can be knocked out in about twenty minutes or so if you abuse the absolutely broken sword you can find at the beginning of the game.

Sadly, "Bunker 9" features some of the most uninteresting combat I've seen in a turn-based RPG in a long time. This is because you'll find yourself near invulnerable to enemy attacks while easily able to beat them into submission with your TP skills. Especially if you utilize the skills found on the most powerful weapons in the game. Weapons that can be readily purchased if you sell of a bunch of animal skins you'll probably find in the first couple of maps in a bid to locate the bunker your looking for. As such, combat tends to be comprised of a lot of guarding between attacks while watching your enemies pointless poke and prod at you for a couple of points of damage. In fact, the most damage I took in this game was probably from a critical hit that managed to inflict 94 points of damage on one of my characters.

To make matters worse, its easy to buy stat up items in this game. This is because the high encounter rate means you'll readily gather a ton of X!XX!X's Plates in the final few areas of Bunker 9. And each of these plates sells for as much as a stat up potion that raises your health by 100 while increasing your other stats by 20 points. As a result, I went into the game's final battle with Kit and Fent having well over 800 attack points. In fact, the final boss didn't even manage to survive a single round of combat with my powered up characters.

On the graphical side of things the game largely relies on the RTP, but does include a few custom graphics. Sadly, these graphics aren't always used correctly. Since, I'm still scratching my head over why Marrend decided to use the character sprites in place of actual character portraits. Though, I'm guessing the biggest consideration for this decision was time, but it doesn't make it any less baffling since I think the image below would look better if the portrait was entirely blank instead of filled in with a tiny owl sprite.

Outside of my issues with the lack of character portraits the game also has a few passability issues. In fact, it's possible to circle one of the early bunker floors thanks to one of the objects allowing Kit and Fent to get on the ceiling. Though, I think I'll save on storage space by using an image instead of a gif on this one. 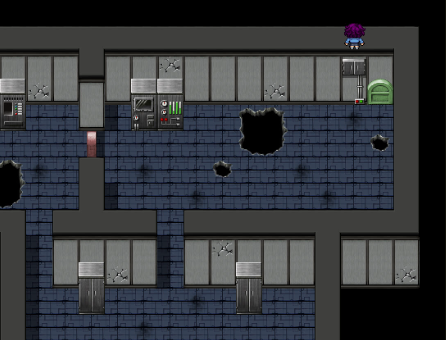 On the musical side of things the game definitely includes several tracks that aren't found in the RTP. A fact, that has led to both of my Let's Play episodes for this game getting hit with copyright claims. Albeit, my biggest gripe with the music is just how loud it sounds. Even with me turning the game's sound down to 20% on my volume mixer, it still felt a bit overpowering.

"Bunker 9" is a difficult game to rate in some respects. On one hand, I don't want to come across as overly critical. After all, this is a project that was thrown together in around two weeks for a game jam. As such, I really can't hold it to the same standards I would use on something like "Luxareen Allure" where the developers had as much time as they wanted in order to refine their game into a well crafted master piece. On the other hand, I can't deny that "Bunker 9" is crippled by dull combat. And while the game does manage to keep afloat to a certain extent by hinting at what happened at Bunker 9 in the past. These little tidbits aren't enough to save the game in my opinion. As such, I really don't recommend this one.

Close
11/03/2019 03:03 PM
Sorry about the volume issue. For what it's worth, I typically have my main speaker's volume at 16%. Wasn't aware there could have been copyright issues either. Otherwise, I would have either used RMN Music Pack, or RTP.

I don't regret the price of stat increases I am a terrible gamedev, but, I kinda regret how Fent was the only thing in this game that used MP ammo. Like, at all. It just didn't make sense for anything else to have ammo with the game's concept. Maybe it could have been cut? I dunno.


Either way, thanks for giving this a go!
thesacredlobo

author=Marrend
Wasn't aware there could have been copyright issues either. Otherwise, I would have either used RMN Music Pack, or RTP.

To be fair, at least using professional music helps to give the game a unique flavor. And the only people likely to care about potential copyright issues are people like myself that spend time recording and commentating on RPG Maker games. And it's not like your music got my videos blocked.

An issue that's plagued my "You Say Run Goes with Everything" video I did a while back. And it wasn't even the music that got that video blocked, but my inclusion of Nuku Nuku TV's best joke simply known as SECRET CALL!!!!!!
Pages: 1