Welcome to the atomic wasteland

Prologue, Shinquest - Years before Skydancer there was a game called Shinquest: this game was a post apocalyptic story about Shin, a martial artist that lives in a small village of the apocalyptic wasteland. The place is attacked by some soldiers and his killed, he saves a girl and together with a her and a boy he leaves finding enemies and allies in the harsh world of violence...

Today, Skydancer - Skydancer is born from the ashes of Shinquest (graphics are similar, characters and setting are mostly the same), a different take on the old story: the setting is the same post apocalyptic wasteland, but this time the tale of vengeance is about Sanji, a sort of cybersamurai (that was playable in Shinquest too but only much later) that leads a group of survivors on his quest to avenge his father. Shin Tanaka from Shinquest still appears as a co-protagonist and he's soon playable too, together with others (familiar faces from Shinquest) like Gunner the blonde soldier and Shin's older brother.

The story and the setting are heavily inspired by Fist of the North Star, even if there is more technology and more cyberpunk elements besides the themes of martial arts duels and survival in a post-apocalyptic world. 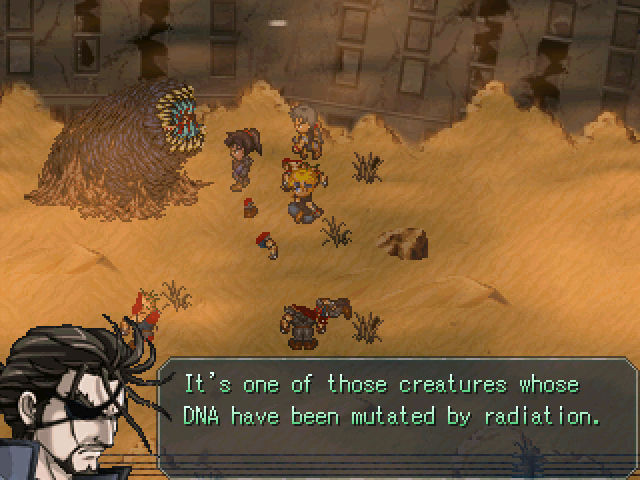 I am pretty sure that Kenshiro from Fist of the North Star never fought mutant graboids!

Gameplay - The game is a classic Jrpg. The party is composed of up to three characters, there is a world map and there are quest. The game is for the most part linear, but you can visit some places freely if you need to restock supplies or sleep in an inn to recover.

Life is harsh in the post apocalyptic world, in fact you can find many wandering enemies on the various maps (that can be avoided, luckily there are no random encounters) together with save points and healing points that can cure the party members... for a price!
Combat is the usual side view ATB with some nice additions: first you have to press a directional arrow when you attack to perform a particular attack (some attacks are stronger but consume more stamina, others actions let you focus to recover stamina skipping the attack action, or you can change the combat stance, and so on). Pressing shift also enables combo and after you collect enough "green dots" (I can't remember the name!) through standard attacks you can also perform special moves that also cost Ki points (that are the equivalent of Mana of MP in more traditionals Jrpgs). But wait, there is more! There's also a bar (divided into three segments) that fills and is the equivalent of the Limit Break (each character has three version of it, depending if the bar is full, at half or at minimum to be released).

So yes, this is a quite complex system, but despite that, the game difficulty is not high at all. Thankfully there's even an easier setting that I used since I think that my keyboard is pretty bad/slow (or my reflexes are, I do not know!). This made the game more relaxing to play and still entertaining. 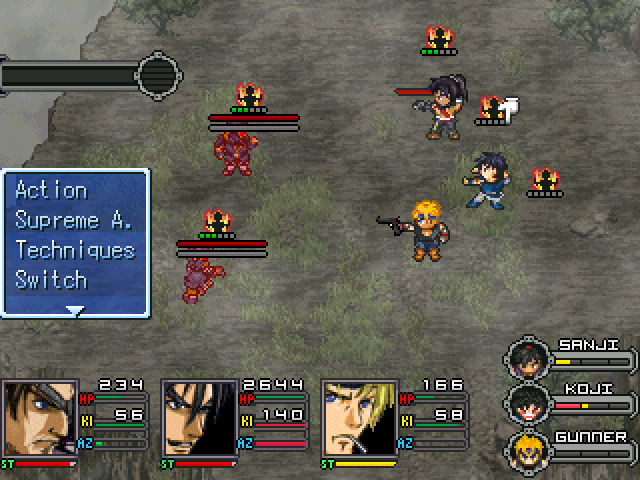 After each battle you earn money and experience points but you do not level up like in other Jrpgs: levelling lets you earn advancement points (some can be also found and collected on the various maps) that are used on a grid to improved the characters, unlocking new moves, improving the skills and increasing hitpoints (better than Shinquest that gave no control on character advancement and was also quite slow).

There are also some little and easy puzzles, and abilities that have to be used: you can look for hidden paths and make the character open/destroy hidden doors, some of these passages are necessary to continue the main quests while others lets you find secret areas and extra loot. Oh yes loot, because you need money, consumables like healing items and object that restores Ki, and also equipments that gives new abilities or improve some skills. 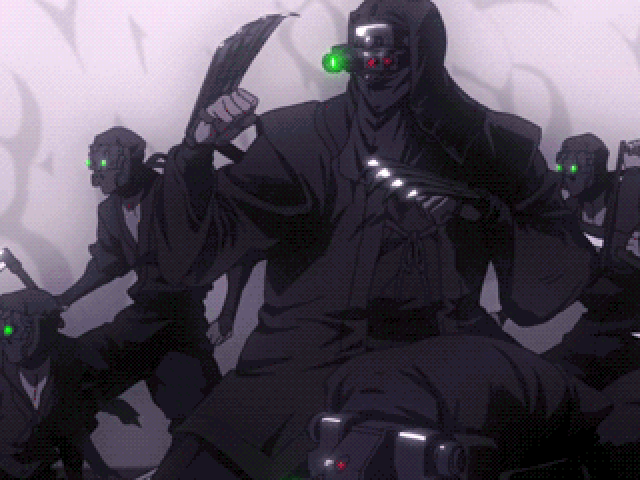 Graphics and Music - Graphically the game isn't changed a lot from Shinquest: I like a lot the animations and poses even if the style of the charsets is not my favourite (due to the big heads, and I notice some First Seed edited characters that has a slighty different style mixed to them). Battlers are well done and monsters (there are dogs, punks, mutants, warriors, cyborgs... so many!) are nice too, they usually use the same style of the charsets but have many poses and even gruesome deaths (again, no surprise since this is inspired by Fist of the North Star).
I also like a lot how characters have different combat styles: Shinji is a samurai that fights using his cyber arm and a hi-tech sword that has two different settings, Shin and his brother are unarmed martial artist, Gunner is a... gunner! Well he is a brawler that also wield a large gun and some grenades.

Portraits/facesets could have been better since there are many but of different styles, for example Gunner has the old Shinquest portrait that's an edited sprite from King of Fighters and clashes with the others portraits that were originals and made with a different stile (also with lower brightness and dull colors).

Maps are nice, nothing exceptional or particularly special, but they are varied and well recreates the post apocalytic 2104 japan.
A special mention goes to the animated intro and some cutscenes during the game that are cleary taken from some anime but well fit and introduce dialogues and cutscenes that are instead made with the Rm2k3 engine.

Music is good too, there are well selected tracks that fits perfectly the various moments and situations, I especially liked the music during the combat encounters, and also the voices of the characters. Yes, because they shouts before attacking, laughts in some situations, and these moments are voiced. Lots of work here, I must admit that! 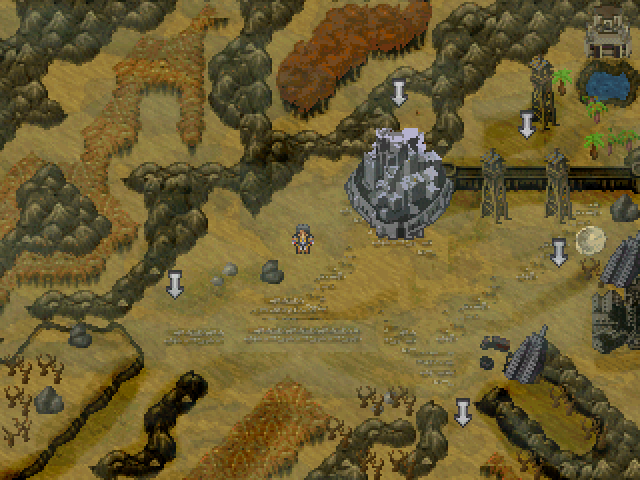 Do you see that city in the wasteland? That's Neo Tokyo, and it's just one of the many locations of the game!

Final Verdict - Skydancer is a game about martial artists, mutants, punks and cyborgs. It has a clearly '80-'90 feel that is both charming and unusual among the rmk games. I cannot speak for the writing since I played the original italian version that is well written despite some typos and errors, but given the amount of work I think this is excusable. Instead I did not find bugs or errors on the maps. System is complex but thanks to a long tutorial it's easy to learn and use, I suggest to turn on the "easy" option if you want to enjoy the story and have fun without too much hassle, since I guess someone can find it clunky and not too pleasant to use, while others would probably like it.

Skydancer. It's a game of big heroes that has already a sequel that is being developed as we speak and features some old and new characters, but I won't tell anything until you have played this one.
My rating is 4, personally I'd have used a more traditional/easy combat system and a more homogeneous style for portraits and facesets (I admit I miss the old KoF edits of Shinquest for the playable characters, here there are still just a couple of them), but there are no other issues (except maybe for some untranslated parts and italian voices, but nothing too bad of course!). I liked Fist of the Northstar, I liked Fallout, and I like Skydancer since it's a mix between these two!

4/5, this was made with lots of work and passion and it shows!

author=uran
THanks dude, I really appreciate that! I'm glan you liked the game. Really! \o UATTAAAAAAAAAAA

Absolutely my fellow countryman! Hope to play a sequel in the future... this is not the usual fantasy jrpg (lots of custom menus and additions too) and I also loved the "low scope" of the game (no magic, no supernatural or godly powers, all is about people). Great job!
Pages: 1