A blast from the past

I remember playing Caede's Pendant when it was first released by Retroexcellent for the 5th Annual Driftwood Jam (it was at the end of march 2020... whoa it is so much time ago, really!)

Caede's Pendant is the greatest adventure of the Merchant Caede and his apprentice Ester: the aged man is famous for his wild stories and fantastic tales, but are they real? It's time to visit some ruins and prove that the legends are true!

What you can expect from this game? Well this is a one hour length adventure that consists dungeon delving mission with a classic party (4 members as usual) with atb combat and thankfully not random encounters, but there are also some unusual new features: for example there are no levels in this game, but you can raise your stats with gold and learn skills. Gold is also used to improve gear, buy equipment and also hire mercenaries, because Caede and Ester are just two but everyone knows that Rpgmaker parties can consist in up to four characters! 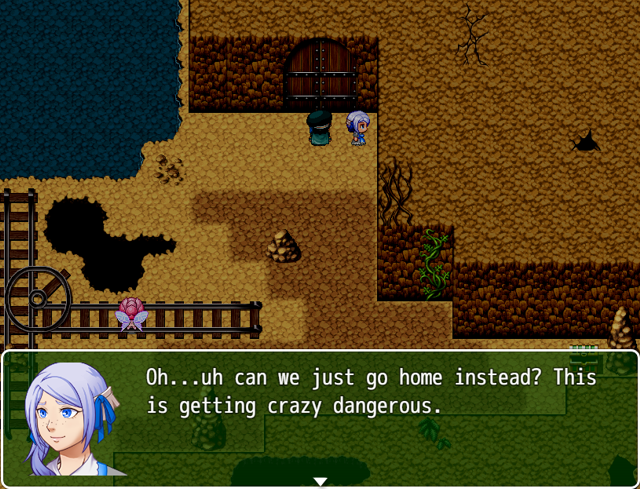 Maybe it's a good idea Ester, but we've a story to finish here!

Caede's Pendant is a classical linear fantasy adventure, short but complete, but it's rather original due to the aged protagonist: it's not the classical tale of a predestined hero and/or young warrior on his first quest, but the story of a retiring experienced adventurer. It's also a personal quest, and the presence of the apprentice Ester ensures some interesting party banter since both characters are likeable and well outlined. Unfortunately the mercenaries are instead mindless drones with few lined of dialogues, but they are totally optional and not involved in the story... pity, I'd have preferred two more complex additional party members as co-protagonists, anyway I understand that some players may prefer the possibility to customize their party or chose to use only the two protagonists, so it's ok, especially considering this was a game made for a contest.

From a visual point of view there isn't much to say: the game uses RTPs but the author used them well for the most part. Probably the only part that could be really improved was the maps, not that are bad but look quite average, especially the one of the town (that has some large empty spaces). Anyway this is excusable too due to the few time available to make the game, and it's important to say that I didn't notice errors or problems in any of the maps.

The only problem I really had was the one with the silver key on dungeon level 2: in this game you can use the items in the inventory and this is necessary in some parts to solve the tasks needed to proceed further. Well I expected that the keys were an exception since I'm used to try to open the door with the key in the inventory... and I was wrong! No, the key is used like other items, otherwise you get a message "the key must be somewhere here" like when you still have to collect it. Uhm ok I was stuck on this part for too much time!

Speaking about too much time... it's time to end this review! 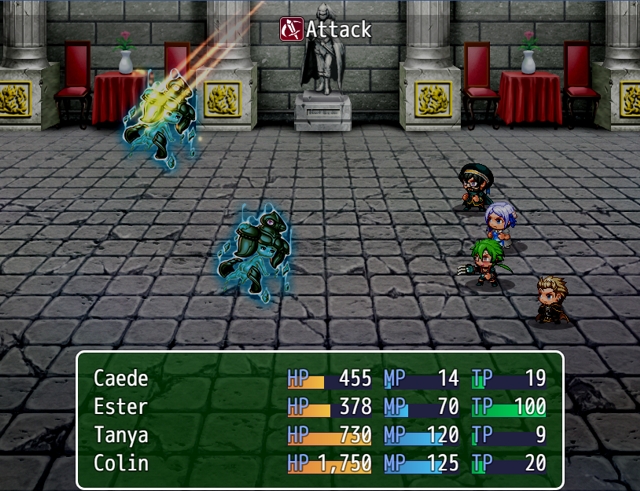 Colin may be tough as stone, but Tanya the Brawler was my favourite mercenary!


Final Verdict
Caede's Pendant is an enjoyable little classical dungeon delving adventure (and I say this despite not usually liking classic RPG Maker MV dungeon crawlers, but this time it was different). I probably expected a bit less from this game so I was pleasantly surprised by some ideas, like the use of money to improve characters, and the amusing descriptions of some particular skills. For the rest it's a pretty classical fantasy MV game, difficulty isn't too hard and it's ok, as it is the length (I admit that it was perfect, I mean the game should not drag too much when it has a simple story and setup). In the end I had fun with it, and the problems were really minor, I won't mind a prequel, sequel or side-story because the story and characters were well written. A nice little slef contained tale.

Close
12/26/2021 02:54 AM
Thanks for the review, and I have good news for you. My current project is a sequuel to this, starring Ester and Caede and adding more story, mercs and dungeon, as well as using custom graphics. I also will be fleshing out all the mercs as the ones I plan to include are going to tie into other projects of mine.
TheRpgmakerAddict

author=retroexcellent
Thanks for the review, and I have good news for you. My current project is a sequuel to this, starring Ester and Caede and adding more story, mercs and dungeon, as well as using custom graphics. I also will be fleshing out all the mercs as the ones I plan to include are going to tie into other projects of mine.

Cool! These are great news since I liked this one, I do not mind the lack of custom graphics (normally I think that edits are ok, or even reusing sprites from old games eheh), for the rest that sounds really even better this one! Now you've my attention!
retroexcellent

Close
12/26/2021 10:06 PM
Honestly I rarely use RTP, this was for a jam where RTP graphics were a requirement, which honestly is probably for the best as I tend to get hung up on graphics and forget all the other things I need to do.
TheRpgmakerAddict

author=retroexcellent
Honestly I rarely use RTP, this was for a jam where RTP graphics were a requirement, which honestly is probably for the best as I tend to get hung up on graphics and forget all the other things I need to do.