I Hate You, Please Suffer

Wow!! I've been really bad at updating this version of the game here. So, a lot's changed. 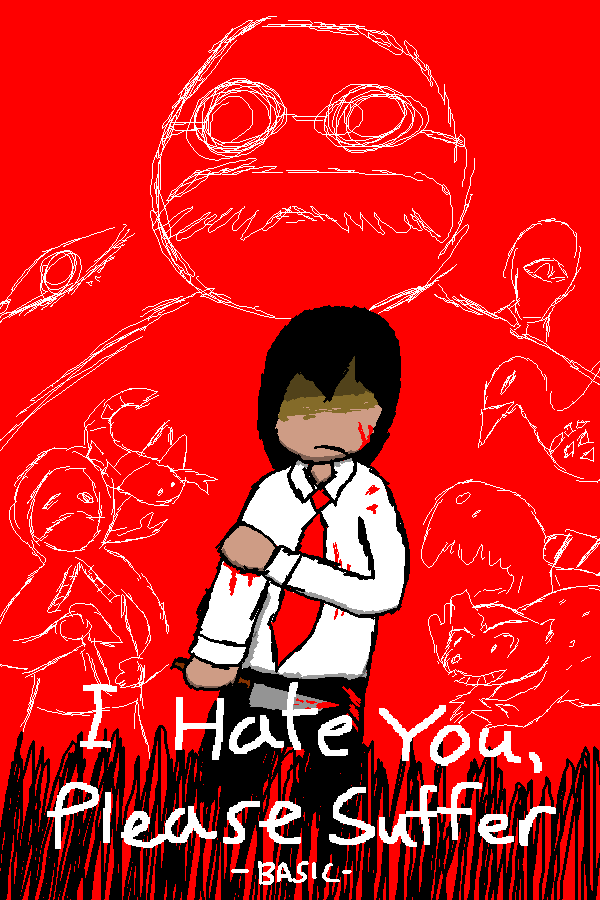 I Hate You, Please Suffer - Basic is now on Steam, too, so maybe check it out on there if you like the vibes. I need reviews for Power. Also there's added chievos.

- There is only one save slot now. You must live with the consequences of your actions. The game will autosave when entering a major area or when you do something luck based because I'm not going to let you savescum. As such, old save files will be incompatible with this new version.
- You can only have 20 of each item; unnoticeable if you're playing normally, but punishing if you're a healing item hoarder.
- Generic NPCs have sprites now.
- Player inflicted bleed works differently now. Enemies now take damage based on their attack and defense instead of a percent of their max health; the result of this is that it's now effective to use against regular enemies while being a nice DOT that doesn't shred through bosses. You, the player, will still lose 15% health per turn, though. All this also applies to poison.
- Fishing is updated! Fishing spots now have set pools of fish to fish up instead of the generic "small fish, medium fish, etc." A second fishing spot has also been added to the sewer at the Tower.
- The sewer grate at the Tower can now be readily opened, both for fishing purposes and so that you can make money off of raccoon enemies in case you somehow get stuck here without money.
- Cursed mechanic updated so that its battle effects can now affect other party members randomly and sometimes debuff the enemy team on top of that.
- What Ramona gets from that statue now has a battle effect similar to the Cursed mechanic.
- Healing from being cursed is a bit harder and more expensive now. You also won't get an expensive sellable from the process anymore either.
- You now only lose stats on death and will no longer lose them if you enter a fight while someone is knocked out. To compensate, the prize thresholds at the church have been increased and Lemonade will now heal more upon use.
- You must do some fighting in between eating sessions at the restaurants now; this is to discourage getting a loan and eating a bunch of food. However, you can sleep at Ramona's apartment multiple times in a row without interruption.
- To accommodate the changes to saving, the Save Coupon in the Hint Token machine has been replaced by the Miracle Pill, which increases all stats to one ally. The downsides to using pills have also been lessened.
- Various additions and changes so that the game will be more consistent with the narrative of the Complete version.
- You are now required to recruit Kyrie to do the arcade machine quest; this is largely because if you're doing , I'd have to keep track of a whole lot more event flags if you do it without her in the party, so this is future proofing for my sake.
- Bonus boss Bartholomew Lightkill now has a second form for proper bonus boss shenanigans and to honor that his source, Eidolon Playtest, finished its second season. Please listen to it, it's good!
- Added some secret stuff, have fun.

- I kept thinking I fixed the Stanley quest drops. It's now fixed for real.
Ambush encounters that were supposed to chase you now move.
Multiple conversations where characters not in the party talk unprompted have been fixed. It's hard to keep track though so a few might slip through the cracks.
- Lonely Heart ambush at church now despawns.
- Kyrie's 2nd church event can be properly accessed now.
- Blessed Ring targets user as intended.
- Cursed Rose properly works now.
- Broken stuff at the Illusion Shrine now fixed.
- Game used to freeze when on :) Mode because I didn't place looping labels for if you didn't have a party member present correctly, so that's fixed now.
Special Tower floor on :) Mode in the second stratum now draws from the second stratum pool of maps when leaving, as it should.
- Fixed up event flags for a certain thing so a character doesn't acknowledge things you didn't do.
- Fixed blackjack game. There was a problem where if you or the dealer got a blackjack, the game would continue as if it wasn't already won; pro-tip, nesting common events into each other and using "Exit Processing" will only stop the even processing for the event you're currently on.

- Experience curve adjusted.
- Enemy stats adjusted.
- Ramona's Business Talk's cooldown increased to 10 turns because it was busted when used with All Business.
- Bribe now works properly in addition to getting utility for boss fights; using it in a boss fight Distracts the boss team for a turn. Don't recommend using on bosses if only Ramona's in the party, though.
- Shank now a low accuracy attack with no defense debuff on Ramona; bleed is still guaranteed to land if the hit does, though.
- Pretend It's Not There reworked. No longer gives Safe condition, but it now heals more and no longer has a cooldown.
- Raccoon Flute was too busted, so damage has been lowered.
- Happy Badge now comes with an accuracy debuff to account for the cheese of stacking a bunch of them on one character.
- Blasphemous Necklace no longer paralyzes you on use.
- Hallucinations and Proto-Angel no longer bleed; Hallucinations also had health buffed.
- Cars now longer bleed or get poisoned. Will now properly leave battle after a few turns so you don't get destroyed.
- Chips/healthy variants now heal flat + percentage of max HP instead of the clown shit I was doing before.
- Gain gang notoriety for being too good at the casino, now.
To balance this out, the guy you could bribe to lower notoriety is now available outside of :) Mode.
- Soul prize thresholds increased.
- Counter artifact was too good so counter rate was lowered.