A Demo about Escaping a Spaceship

Intro
Retro Shock is an action RPG Maker game focused on hacking and real-time battle. System Shock is one of the inspirations of this game, and since I never played the game, I won't comment much on it.

Graphics
The mapping is done well. Some sprites might look different compared to others, but it doesn't affect the overall experience. However, some objects have strange collision detection: the railings in the first area are impassable while the tables in the last area are walkable. The tutorial also occupies too much space on the screen, blocking my vision.

Story
The game tends to put too much information at once. There is a huge wall of text as soon as you start the game and people talk too much despite you knowing so little about it. It makes it hard to understand the dialogues, and I had to reread the dialogue twice just to understand it. Moreover, some information also seems to be irrelevant and can be moved to later parts of the game.

On the good side, I like the character's talking style. It gives a sense of uniqueness while not making it too forced at the same time.

The Game
Gameplay and Combat
The game is focused on looting corpses and objects for items and shooting mutants. Despite the weapon variety, pistols have limited ammo. The melee weapon also has more damage compared to guns, and since most enemies are walking slowly, it's faster and more satisfying to melee them.

Some enemies can be hard to kill with melee though. A shooting enemy with fast movement speed is introduced later on, making it easier to kill with guns. I didn't have a chance to beat it since it suddenly disappears after activating a certain cutscene, but there is another unfair enemy that can't be defeated without taking damage. Teleporter enemies will be introduced in the last area, and it's hard to see where they are due to the limited lighting. Their attack is also unclear and can pass through objects, making it easier to kill just by tanking their damage. 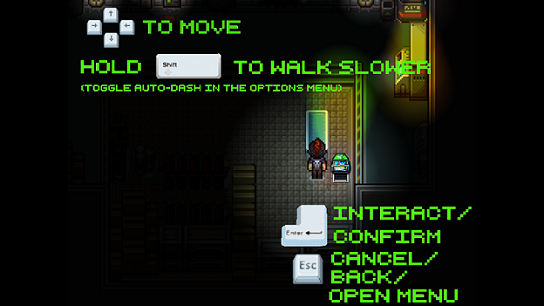 The tutorial occupies too much screen at the beginning of the game.


However, despite how the combat system works, the game is stingy on heals. You can only heal using skills that can't be learned until at a later point in the game, and the items that you can loot are limited. Moreover, enemies deal more HP than what the healing items can heal. This encourages the use of save-scumming to preserve items for important moments.

Puzzles
Although I'm not sure if I consider it as a puzzle, there is one in the game. You'll be tasked to hack into the system by lighting several available nodes to green. However, I couldn't seem to understand how it works. Despite the game telling me to change all red nodes to green, I finished the puzzle without doing it. It might also be caused by my lack of comprehension of the minigame though, especially due to the wall of text that was given as a tutorial. 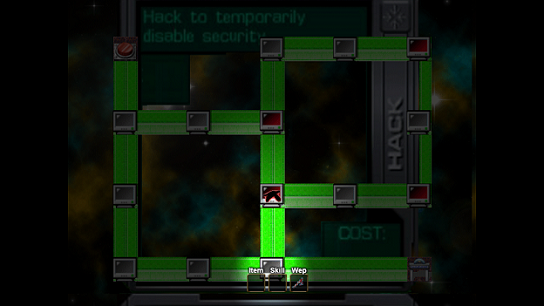 I don't know how this works, but I solved it somehow.


Length and Difficulty
I finished the game in ~41 minutes. The game isn't hard as long as you are not taking too much damage from the slow-moving enemies. There are only 3 enemies that will give you trouble although the strange collision of the fire in the first area might also give you unnecessary damage.

Problems
Enemies can attack you when a cutscene kicks in without allowing you to dodge or fighting back.

Cons:
- You can get fire damage just by standing next to a fire
- No full heals, healing item heals too low
- Some enemies seem unfair with almost no way to fight back without taking damage
- You can get damaged by enemies when a cutscene kicks in

Final Rating: 3/5
The game isn't bad actually. I might have listed a lot of cons for the demo, but it's mostly just general issues. It also feels too short to showcase what the game has to offer - there isn't much that is happening at the moment. On the good side, I liked the mappings. The combat is also smooth enough despite the unfair enemy. The hacking system needs to be more polished though since I had no idea how it works even after finishing the demo.

---
Bugs:
- Skills and PSI disciplines in the shop provide the same item

---
Suggestion:
- I think this sentence needs some rework because I can't understand what it means: "Hmm, I really do wonder, were the complement of UN Marines plan A and you the contigency, or you Diego's preferred agent of first resort and the Marines the contigency?"
- The image on the start screen is also blurry. You might want to make it clearer