The title of this game is a challenge and it's meant to be. On the surface you can take it as being merely descriptive rather than insulting. Mabel, the Fat Farming Girl of the title is indeed a girl, she does run, or is attempting to run a farm, and she's plump. But then again everyone who lives in this village is on the plump side, though what do you expect in a place with cherry cotton candy trees and chocolate houses? I'm amazed any of them have teeth. But the title can also be taken as the way I believe it is meant, as a shock, something to make you take a step back and look at some everyday assumptions more closely.

The pastel hues of the custom graphics hide a darker message about societal pressures in regard to body image, life choices and the traditional' every little girl wants to be a bride' stereotype that is so prevalent in society. Many little girls do, so do some little boys. But not all do.

FFG actually gives Mabel some interesting choices in order to deal with the situation she finds herself in. It seems that an evil greedy banker (in fiction is there any other kind?) wants to foreclose on Mabel's farm. In fact she appears to want to foreclose on the whole of cherry chocolate village, ok it's not called that but it should be. 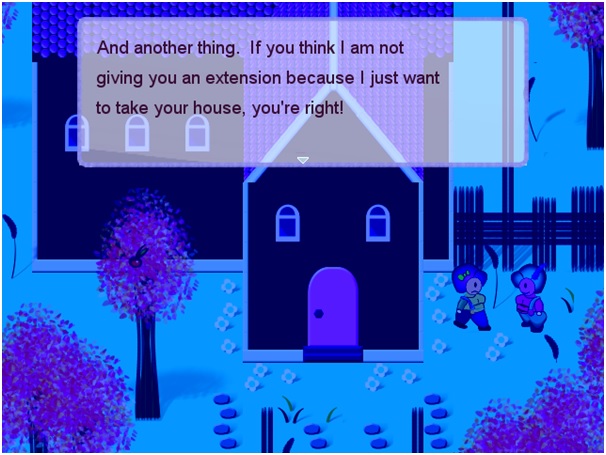 You can follow some fairly standard ways to get Mabel out of her predicament, turn the goat farm into a successful business and pay off the loan that way, woo the mayor and marry your way out of debt, lose weight and charm the goat herder who'll cover your debt, or you could kill her. Yes that's right one of the option available to Mabel to solve her dilemma is to kill the banker. It's a modernist Shakespearean interpretation for the post-GFC world; first kill all the lawyers bankers.

I thought this was supposed to be a harvest moon type game, not Midsomer Murders.

The banker has given you 30 days to come up with the cash, which is interesting in a real world terms since the game files all refer to the game as 30 Days so it obviously went through a name change late in the proceedings. During these 30 days you build up your nest egg to either pay off the bank, or earn enough to procure a knife to slaughter the usurer in her bed, or in some way or other make yourself attractive to the two available males of your choice, the goat herder who doesn't like chubby chicks (his words) or the currently married but lecherous mayor who does. Murder is looking the best option right about now. That or selling up the place, paying of your minuscule debt of $100 and getting out of this 4 goat town.

The graphics in the game as mentioned are all custom, tall cotton candy foliaged cherry trees dot the landscape surrounding chocolate coloured houses with vibrant purple roofs and candy pink doors. Paths of grey river pebbles meander through the spearmint grass bordered by rustic fences and animals pens where sheep the size of ponies graze. It's a remarkably bright and colourful world for such a desperate premise. The character sprites are based on two templates, one for each gender with some colour variation in dress and hair to differentiate them. There are a plethora of passage errors with the ability to walk into walls, through fences and appear on rooftops. In addition the character sprites are like Egyptian wall frescoes, two dimensional pictures with only a left or right facing image which makes them appear to crab walk around the game. It's quite disconcerting and I don't know why the developer didn't take the time to draw the front and back facing character sprites since they had obviously taken the time to create the custom work in the first place. 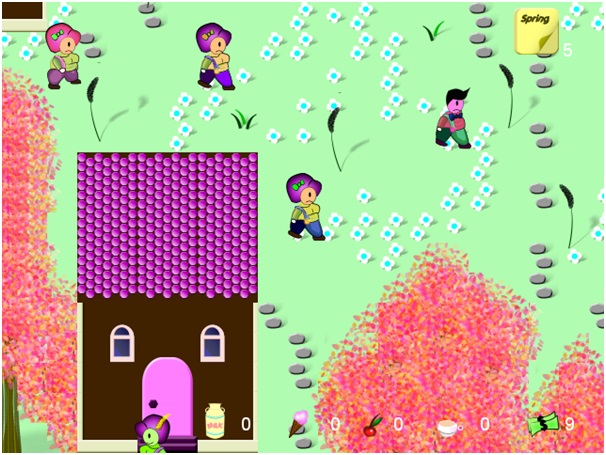 One of these is the protagonist, can you tell which one?

The music as well is an odd stylistic choice, it's all classical pieces, the use of the pastoral symphony when visiting the goat pen to milk them each day is a knowing nod, but whilst I did really like hearing something other than 'game music' tracks, I found the pieces chosen weren't always suited to the atmosphere. There is also a game breaking glitch linked to a certain event. One of the cherry trees in Mabel's front garden has two fruits available for picking but one of them has a fadeout event when you pick it up without a corresponding fade in which means you are left with a black screen and no way to re-establish the graphics. Since you can only save once a day before going to bed, you will lose that days progress when you need to restart. The only way to continue the game is to not pick from that tree, every other cherry you can harvest is error free.

Each day of your allotted 30 you can milk your single goat to earn $2 from the goat herder, you can also work for him and earn $1-2 depending on how well you did, but working for him burns off fat which will over time increase his interest in you as a potential partner but decrease the mayor's as well as cutting off one source of income, the cherries that grow on the cotton candy trees. The only way to procure them is by sideswiping the trunk and causing the fruit to fall and you need to be hefty to accomplish that. Each cherry will net you $3 on its own or you can save it and make cherry ice-cream with it for a higher return. You can also visit the mayor and chat with his wife, who unsurprisingly is friends with the avaricious banker and play the piano which increases both you intelligence and the mayor's interest in you, it seems he likes fat smart women. In it wasn't for the fact he's a duplicitous lecher he'd be just about perfect for Mabel. 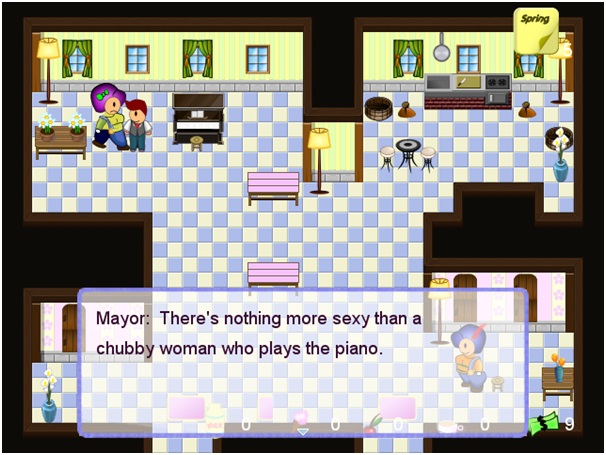 My eyes are up here, Mayor.

The goat herder will sell you another goat for $25 and since milk is the base ingredient in the most lucrative items it's a good idea, if you've decided that Mabel should save her farm on her two feet rather than on her back, to purchase one as soon as you can. There is a single item you can find that will aid in that, a piece of scrap metal which the goat herder will give you $10 for, or he will turn it into a knife for you for $20. If you are aiming to rid the town of the banker you'll need that knife as it seems suffocating her or bludgeoning her to death with a chair leg just won't cut it.

Whichever option you choose you will still need to play out the majority of the days before you've done enough or earned enough to trigger the conclusion phase. Each of the outcomes have their various repercussions, two of the possible five endings give a sense of achievement, one leads to eventual abandonment, one to a life of monotony and the last to a message that you lost and should replay the game.

There is however one unbelievably sour note at the end, if you manage to earn enough to pay off the banker when the 30 day deadline is reached there is a scene where the developer for no reason that I can fathom decided to use an utterly vile insult to denote the banker. It was completely unwarranted and sent my enjoyment of the game plummeting. I recognise that this is a purely personal reaction but it tainted the entire game for me, to the point where I simply cannot recommend the game. I have no issue whatsoever with casual profanity, I practice it myself but for me there are certain phrases and words that simply should not be part of a civilised vocabulary, and this is one of them. If you are not of that mind-set and I recognise that not everyone is, then please give this game a try. If you are either avoid it or don't choose the path of self determination and hard work. That or skip through the confrontation scene with your eyes closed.

In addition there is a blatant and inescapable (unless you F12) final screen where the developer requests you buy his commercial games, and either spam your friends with his game, accept spam from him about his commercial games, donate to him or talk about him on social media. I would have had no problem with any of that, Indie developers have to eat too, if there was a 'no thanks' option, there isn't.

In the end what started off as an interesting premise with some inventive viewpoints devolved into a poorly tested, crudely implemented and in the end slightly offensive game.