I'll be the first to admit that I haven't played that many point and click adventure games over the years. In fact, I tend to go out of my way to avoid them. After all, I tend to stick to what I know which is taking names and kicking untold amounts of @$$ in turn-based RPGs for the most part. But I feel compelled to step a little outside of my comfort zone in order to claim another bounty. 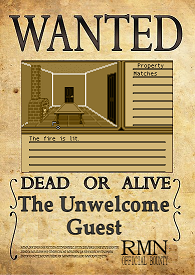 "The Unwelcome Guest" was developed by FlyingJester using sphere an engine which has given me trouble in the past. At least when it came to recording footage. Thankfully that wasn't the case with this game. So I can actually use gifs and still images in order to accentuate my issues with this game.

You play as a poor slob whose run out of gas and whose only hope for a quick refueling is that an old, creepy mansion you passed by a few moments ago has some on hand for a weary traveler. Of course, once you've invited yourself into the mansion you find yourself hopelessly trapped like a dirty rat. And if you want to prove yourself an escape artists like so many dirty rats do then you'll need to explore the mansion in order to find the tools you need to succeed, but what secrets will you uncover while exploring through the various rooms that comprise this mansion? And will you ever escape or will you simply die in the attempt?

"The Unwelcome Guest" is your standard point and click adventure game where you run around searching for clues as well as for useful items for solving your current predicament. Of course this means such games are all about solving problems through either logic or trial and error. After all, it really doesn't matter how you solve a puzzle as long as you arrive at the right conclusion.

But I can't help but feel like "The Unwelcome Guest" is missing quite a few puzzles. After all, there are a lot of items you can pick up in this game that you'll never use. A few examples of this are a tiny bit of string which could be used for all kinds of purposes in most games as well as an iron key you find in the kitchen. And, I can't help but feel like these useless items only serve to clutter up your inventory as well as make it a bit more difficult to find the items your actually looking for.

On the graphical side of things the game starts of rather well in my opinion. After all, there is a certain charm to watching a car driving along the road as the sun sets in the background. Though sadly it appears to already be near the edge of the horizon considering it quickly disappears with the first couple of seconds of our rolling intro.

Unfortunately these good qualities are quickly lost as soon as you enter the manor at the heart of this game's story. This is because the game looks like it was slapped together in a program similar to MS Paint, but what really makes the game suffer here is that a lot of the rooms in this game are just butt ugly. Seriously, what sort of interior decorator would paint walls in such garish colors while combining it with such drab flooring. 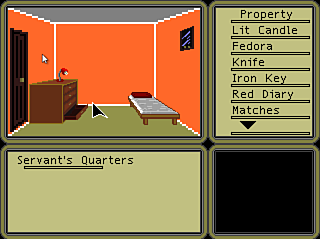 The game has a highly repetitive soundtrack that is comprised of a whopping two songs as far as I can tell. And neither of these tracks is particularly enjoyable to listen to. So much so that I think the game would be better of if it was silent. At least that would give the game a better chance to build up a creepy atmosphere from just how unusual it is to play a game without any background music present.

"The Unwelcome Guest" is a short, point and click game that manages to come up royally short in a lot of places. For starters, it really doesn't come across as the unnerving for a game trying to associate itself with the horror genre, nor does it really excel in the graphical or sound department. And while the game does dedicate a few items to exploring the story in order to make it easier to understand. These bits and pieces are in service to a story that isn't particularly compelling in my opinion. As a result, I can't help but recommend that people skip over this game in favor of other titles.