Take on the role of a young boy named Pierce in the world of Sorrow Moor. You quickly meet a wolf, adequately named "Wolf" who will help you on your way through this desolate land. You battle your way against slimes and bats to meet "The Oracle" who will tell you why you are there and what you have to do. Your mission will be to slay "The Beast" thus saving the land of Sorrow Moor and making Wolf's tail wag with joy!

Sorrow Moor, snakins' first RPG Maker VX Ace game, is OK, even quite good for a first game! Unlike most people (me included) for their first games, he shunned the RTP and made some fairly nice custom graphics. Some of these were just heavily edited versions of the original run time package, some original. At points the tilesets are really quite quaint and nice to look at. The sepia, monochrome theme is consistent and works well for the game. 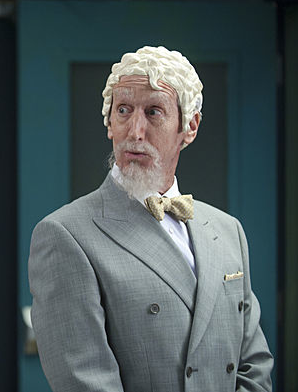 Maybe Pierce is trying to get away from his dad...

So as far as graphics are concerned, thumbs up for effort and it does overall look quite nice. The audio on the otherhand is dissapointing. In the world there is none whatsoever! The only times we are treated to some ear-vibrations are when using the menus and during battle! Some nice atmospheric sounds could have really brought the place to life!

Personally, i found the game quite easy. I finished it in about twenty minutes (way off the promised hour given on the game profile). The enemies appear quite often, to a point where it can be quite irritating due to a lack of battler variety, and the game may well have lasted an hour if i'd fought every one. Nevertheless you can escape every battle with no problem (except the last boss) without it having overly negative effects on your character's progression. Having escaped from about 50% of all the battles, i had no problem taking on the boss at level 7 and managed to buy an abundance of potions and antidotes.

I put these flaws in the gameplay down to inexperience. The story is also lacking in substance. We don't really get any answers to why we're here, where here is or who we really are. The dialogue is worked to a bare minimum and i didn't really have any emotional connection to any of the characters.

Everything looks good in sepia ;)

It's definitely clear that this is the developer's first game. There is obvious potential for good game-making skills. Plus he's made four games since, one of which has a 4.5 star rating! It was a good start. In his place, I wouldn't bother coming back to it and work on improvements, save perhaps adding some music! I'm giving it the rating of two stars as, while being a good first game, relative to the rest of what can be found on rmn it's still just below average. It didn't really engage me!