Too short to be a saga.

Eclipse Saga starts with a moderately well handled information dump, the pages of old tome written by an unknown author are displayed outlining a war between the forces of a fledgling human civilisation and those of the elder races, and the chance meeting of two enemies on the battlefield that grew to become unlikely allies and lovers. It's a little overly moralistic and focuses pretty heavily on omnia vincit amor, but it's not excessively long or more verbose than you would expect from a tome penned by a member of an elder race in a time long distant.

From there the game shifts focus to a short cut scene that briefly introduces two 'guardians' Ethan and Winter but you don't get much more than a short vignette with them before we are whisked away to meet our protagonist, Ellette, a fairy thief and her cat familiar who are about to take on a job to rob a local magician of some necessary ingredients. To do so you need to be able to pick the lock he has so inconveniently installed on his door.

I'm not a fan of the lock picking mini-game as it's all based on reflexes which are painful and if you get it wrong you break and therefore lose your lock pick. Given you can't actually move off the opening screen without entering the house to steal the magic ingredients this means that you can get stuck right at the outset since save is disabled and there is no way to move forward other than to restart and go through the opening again. Luckily there is a skip intro option, what there also needs to be in a locking picking 101 screen to let you know what you need to do rather than just dump you into it. Whilst you are looking at the various icons trying to work out what they do, the timer rushes to zero; you lose the mini-game and the means to continue. 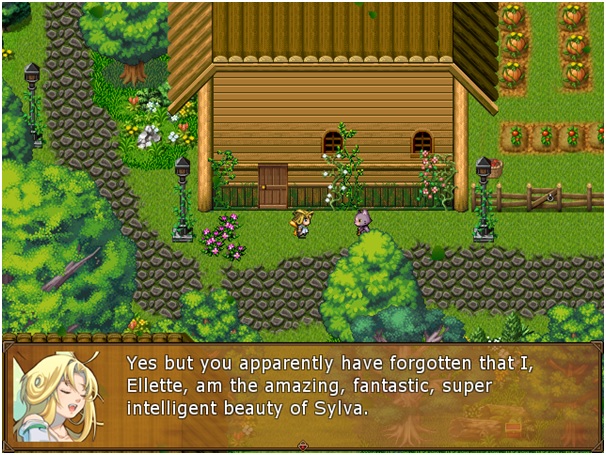 ...and yet not smart enough to pick a lock.

It's not a great start, but luckily it's just a minor hiccough and once the pesky door is open the game picks up. Though the lock picking game still rears its ugly head occasionally. There is a lot of attention to detail on the game, just about everything is interactive with the items of importance to the quest or Ellette's hip pocket highlighted by sparkles, but they are not the only items worth finding so it is a good idea to check everything at least once. You'll find some odd accessories in this wizard's home.

The interaction between Ellette and Nick, her cat familiar are great, very much at the banter end of the scale and actually funny which is harder to accomplish than a lot of people seem to think. They play off each other well and you can already tell via even this opening sequence that they have been working together for a while and working together well. It's a good dynamic and portrayed realistically, well as realistically as you can portray a relationship between a fairy and an anthropomorphic cat. The interactions with the talkative save ghost are also a bit of fun, though I wish he was a more prevalent character as there were some stretches where not be able to save were a detriment to enjoyment.

Once you've worked out that the wizard's house is just a façade and have entered into the real place that he lives you get to try out combat, and this is where the developer has obviously spent a bit of time. There are a number of additional bells and whistles added and they seem to integrate pretty well without more than the occasional lag but that is forgiveable. The combat is side based ATB with some nifty animations included and a voice over for every action on the part of the party members, which whilst fun does actually begin to become irritating, though the developer has indicated a later release was planned to allow that to be toggled on or off at the player's discretion. The monsters also make a variety of damage noises, from groans to squelches to screams dependant on the type of monster and those are very satisfying. However I really don't think the battle music is suitable, it is much too mellow and lyrical, and there is nothing in it which ties into fighting for your life. 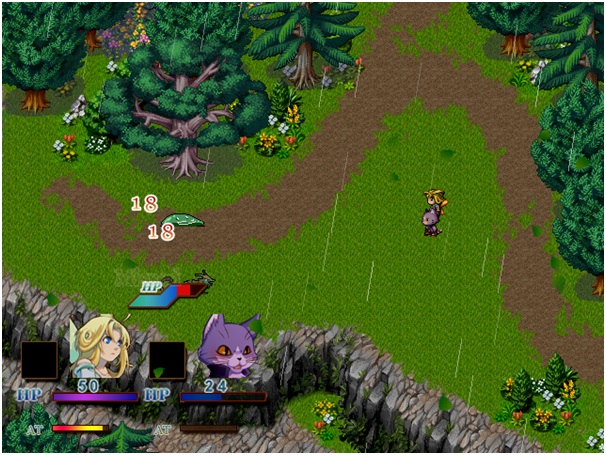 If you didn't want to die chameleon, why did you become visible?

A gradual HP indicator is also included the for the battlers so you can judge what skill to hit them with without wasting them this is very important as magic within the game does not rely on MP, rather you have a set number of uses for a particular skill and if you use them all you cannot cast them again. In addition there is a warm up and cool down period for each spell so battles do have a modest strategic element to them which does make for a more interesting combat system. Though I would have liked it if gaining levels either increased the skills you had or increased the number of times you could cast a particular spell. As it is it just adds to HP and stats.

Healing items are a rarity in the game, but to counterbalance that the developer has made it so you fully heal at the end of each battle so the challenge is to keep yourself alive to the end without wasting precious resources to do it. It doesn't matter if you both make it out with 1HP each since you'll be back to full strength for the next battle, so that tends to push you closer to the edge in the risks you are willing to take with the characters in battle.

Combats are via both visible and random battles which is an odd mix and one I'm not particularly enamoured of, I can, and do, cope well with both types of combat initiations though I will state my preference is for visible enemies, but I really don't like the mix and match scenario.

The world in which our characters walk is a rich and varied one. The developer has created some custom pieces for this world and has also modified some of the RTP to give them more depth of colour and realistic attributes. It works fairly well and blends pretty seamlessly. Though the plethora of plant life in the forest does make seeing those visible enemies a little more difficult than normal, but it does aid in the immersion factor so it's a worthwhile trade off. 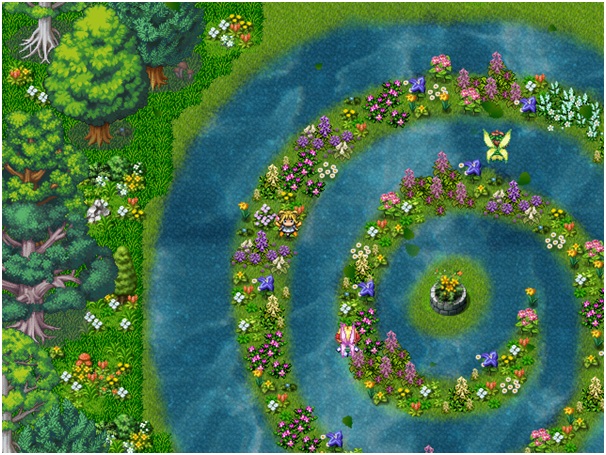 Now that is seriously pretty.

So after battling your way through the interdimensional pocket forest that the wizard has created, the two guardians from earlier in the piece make an appearance, and we get to learn a little more of them. Most of the information is contained in comments made by the smarter of the duo, Winter, who it seems travels with Ethan for the comic relief and the ability to break down just about any barrier with the force of his fists and the utter stupidly of not realising he couldn't punch his way into an interdimensional forest in pursuit of his goals.

It's a partnership made in heaven and remarkably plays quite well with the original duo, though they are not teaming up just yet. Ellette's penchant for seeing everything as her own conflicts with the creed of Ethan and his guardian ethics, so it takes some fast talking on the part of Ellette to get them out of the dimension and then later away from the guardians. But our fairy isn't just light on her feet in a literal sense. 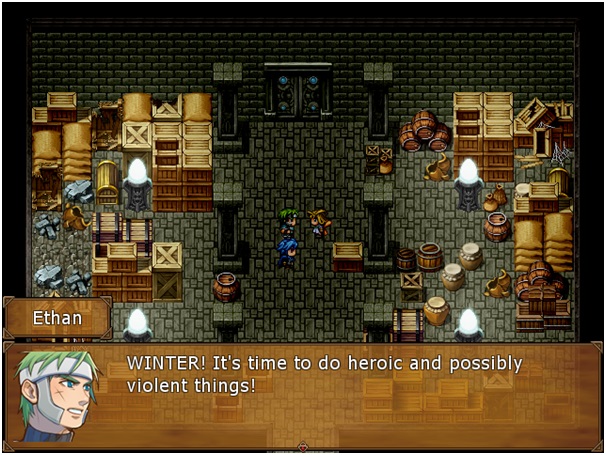 Still with these two it's only a matter of time before they run into the forces of authority again, and since Ellette's way of dealing with trouble is to find a bigger trouble to worry about that matter of time will be quite short.

But first there is time for a trip though a beautifully mapped dungeon to complete a fairly daring raid on the holiest of shrines and to meet a couple of less than forthcoming characters, and battle a dragon. Once that's done however, our not as clever as she things she is thief comes up with a perfect plan to get rid of the loan shark she owes money to without paying him, and keep the gullible Ethan on a string, what could possibly go wrong?

Unfortunately the demo ends soon after this point and given the developer hasn't commented on the game page in the better part of 18 months there isn't a lot of hope that this game will continue which is a bit of a disappointment. Quite a lot of work has gone into making it polished and interesting, the combat has a lot of potential and the characters are interesting and funny, apart from some better musical choices, and perhaps more of a tutorial for that lock picking game, this is a pretty good adventure, especially since it is the developer's first major foray into game making and I would have liked to see where they went with it.

Alas it's not to be, or at least not so far.