Ok, so today I'm talking about Hello Panda, a game that isn't an adventure game or an rpg, but an arcade shoot-em-up. The story is about three Hello Panda girls, thieves and assassins that are tasked to find a painting said to be a weapon of mass destruction. This is explained through a single screen of text while we listen to one of Kill Bill theme songs, that as you can guess, is one of the main inspirations for this game.

Then we choose which of the three Panda girls we will play: Artemis is average in all stats but her twin guns has a wide range, Athena is faster and mre powerful with her knives, Pandora uses a remote to control two floating directionable machineguns.
Each one possess a different special move, for example Artemis has a sort of powerful blood beam, instead Athena can throw bloody homing daggers. These special attacks are called Crimson Moves, and erase also the bullets of the killed enemies, but to be performed they need a high Blood Gauge. This Blood Gauge is increased, as you can probably guess, by killing opponents (well, you have to take the blood somewhere!).
But wait, there is more! You can also trade blood to improve permanently your weapon or spend a blood pack to perform a Crimson Drive, a super move... no better, a SUPER MOVE that will usually hit every enemy on the screen. Oh and you can also parry and destroy bullets if you attack just before they hit you!
See? Lots of options and tactics. 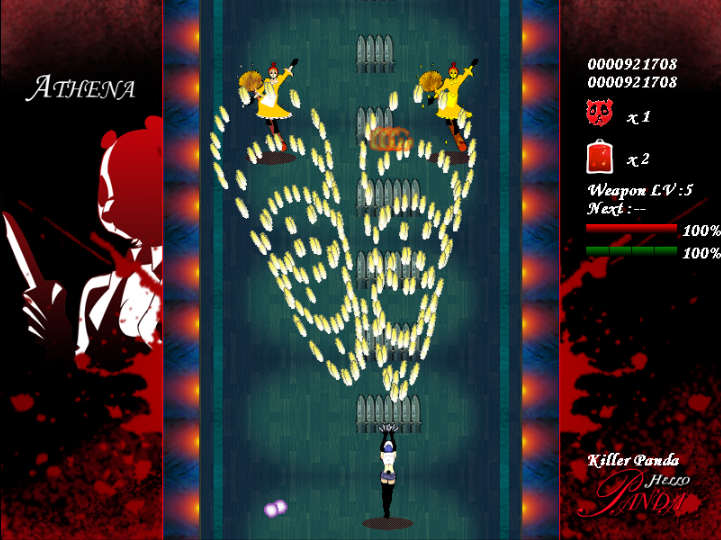 THESE MAIDS ARE ABSOLUTELY NOTHING COMPARED TO THE KOALAS!

Of course you need to master all these abilities to defeat the powerful Koala bosses that will be found at the end of each level. These opponents are far more dangerous than the mid level sub-bosses and also have different combat phases. Nice!

The game has a good art style with a black-white-red dominant theme, plays fast and fluid even when the screen is filled with bullets and bad guys! Music comes from two movies, Kill Bill and the Matrix, and there are also some nice references (the first boss is Koala Smith, like agent Smith of the Matrix, even if this could also be a reference to the Smith Syndicate from the game Killer7, whose members coincidentally use blood to activate their powers).

So, is there anything bad about this game?
Well you get no possibility to save between levels and infinite continues, so while this is an appropriate choice, I'd have personally preferred the other way.
Moreover the levels are quite similar, there are few enemy types and, as you can expect from a simple arcade shoot-em-up, there is little variety. 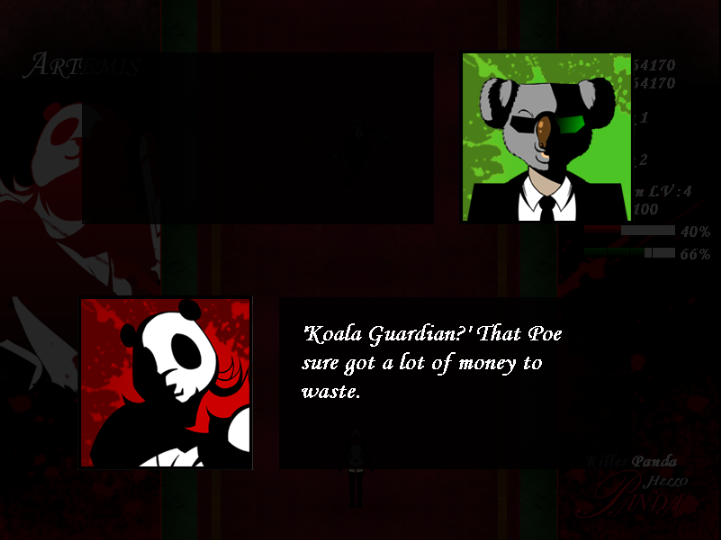 AND NOW GET READY FOR A BOSS FIGHT!

Verdict
This isn't a game I will play uninterruptedly for weeks, BUT nonenthless this is a game I'll surely pick up when I am bored to do a run and kill dozens of criminals.
Hello Panda does what promises really well, better than other similar games that tried to do the same. It also has a distinct and original style, a singular and unusual pulp theme (no airships, planes or cute characters) and a refined gameplay.

It gets a 4! BLOODY AWESOME!