The humble beginning of a great saga

The Way Ep 1 - The land beneath the sky was probably one of the first Rpgmaker games I played, if not the first. I didn't know what I could expect from this experience, and I admit that it wasn't as I expected at all.
I was expecting a classical Jrpg, with a party, monster and bosses to defeat and I surely did not expect to be so enthralled by the adventures of Rhue.
No, the Way is much more, it's an experience, and a story that LunCasari tells you in a... way... that always leaves you waiting, always yearning for more.

Let's start from the story: this is the best part of the whole serie, but if we're talking of the first episode only I admit I found it a bit lacking: we just can say that here our wandering warrior Rhue meets peoples and does... things!
Yes, the first episode is just a linear serie of situations that the protagonist faces but only in the next longer episodes there'll be a real story, exploration, and well, the "real thing".
Alone, this single chapter isn't bad but seems just a little game, without all the features and developement of the next chapters with their drama and events, also it seems quite simple, linear and maybe even bland, instead it just sets all the things in motion, Rhue starts in fact as an almost blank slate and it's ok, since the theme is travelling, wandering, and the situations of this chapter will start everything as a lit fuse activates a bomb. 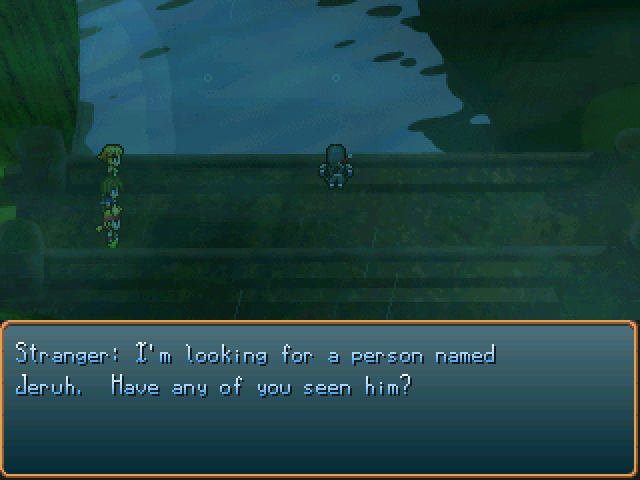 You'll never guess what will happen later! Trust me!

For example lots of characters are introduced, some of them appears and then disappears without a real part on the whole saga and only serves to teach the basics of the game to the players, others that you will be met are instead the real stars of this story, from our unlucky protagonist Rhue, to the strong Traziun, the mysterious Gaius and the roguish Strata and so on.
The narrative flows natural, fast (never boring or with wall of text to read) and the world that unfold before your eyes is quite peculiar, surely it's unlike your typical fantasy, as there is almost no magic present, and seems more like a wuxia adventure: lots of duels and drama, monsters are just wild animals and there are many legends and stories, some of these will be clarified, others left vague.
I also like the fact that LunCasari, besides the original world and lore, created a series of expressions and curse words typical of this setting."Lands! Flaming lands!"

About this episode I noticed an interesting thing: while most jrpgs start easy with you fighting a weak opposition (goblins, bandits and so on) and then lets you fights stronger enemies, here it's different because YOU start as a weakeling, that unlike stronger warriors like Traziun (and many others you find in this episode) is unable to win and survive alone.
This will change in the next chapters, even if Rhue will never become a mighty hero or a badass (like Traziun), just a survivor in a world that becomes grittier and darker as you play. So do not feel discuraged from this first episode and its shortness, from the the defeats and failures, this is like an adequate cover made for a great book.

About the gameplay? There's a bit of everything: the standard jrpg combat with a party of characters (nothing fancy, just first person with no battlers, and it's a pity since I think that the sideview with battlers looks better, but that's ok), minigames, puzzles and the introduction to the Plunge, a dueling system that will be protagonist during all the serie, and it's a sort of Rock-paper-scissors with some abilities added. 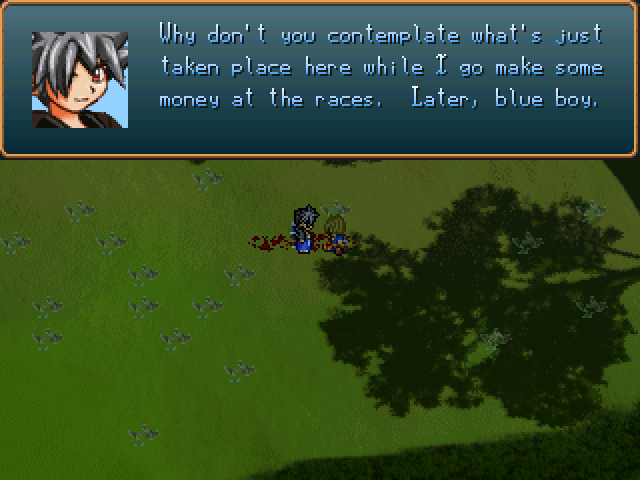 Is this the end of the Way? Nah, just the beginning. Revenge can be served in one of the later episodes...

You can like or hate these minigames, but no one cannot deny that they are placed as diversions that fit with the events of the story, and I felt that no one of them was too hard or frustrating (well except maybe from the boulder jumping part! I hated that while I liked the one where you have to catch the rabbit, still I know people that think the opposite!) even if you'll surely have to retry some of them, and I suggest to do that in order to gain useful items. In fact the whole game is a journey, there's no going back, so expect to try to do your best not to miss anything or you'll regret that: the character is exported from one episode to the other so if you miss too many items you can find yourself "underleveled". I said "underleveled" because this isn't an ordnary rpg and there are no levels, just items that you equip and absorb during fights.
This means that you cannot grind in the usual way (ehm!), but as you said before, if you do not find these items you do not improve your abilities and for this reason you won't be able to progress in the next chapters, because for the most part in Chapter 1 you're fated to fail, but in most cases during the following chapters failure means death! (and I had to reply this and Chapter 2 to be able to progress, since my Rhue was too weak)
Anyway this isn't entirely a bad thing, because without the need to micromanage a party and collect money to buy gear and items, you can focus more on the story and the narration. This isn't a strategy game, it's an adventure made to entertain you, and it shows a lot of variety in the activities from the beginning of this first chapter. Oh, I forgot: there is also the option to play the game with no puzzle and/or battles if you prefer.

Let's talk about graphics: while I like the style of the charsets and facesets (most of them are the usual Rm2k3 database heroes and edits of them, but they match perfectly) that are also nicely animated: every character has a lot of different expressions.

It's worth noting that the cuteness of sprites and portraits somehow contrasts a lot with the violence of the setting: there will be blood and deaths, especially in the later chapters.
Instead find that the 3D scenarios are a bit odd and do not match at all with the 2D sprites. I don't know which was the idea, but in my opinion they do not work so well together and the characters/monsters seem "detached" from the background that in the end doesn't seem natural, there's no armony. This happens during all the serie, and it's a pity since mapping isn't bad at all, and also the interiors, when the chipsets are used, are a lot better that the 3D outdoor areas. I think that they could have been used differently, for example as a background for the 2D areas. That would have been perfect since the atmosphere is well defined also by darkness, rainfalls, really a pity that those enviroments felt like as lazy connections to the next scene! 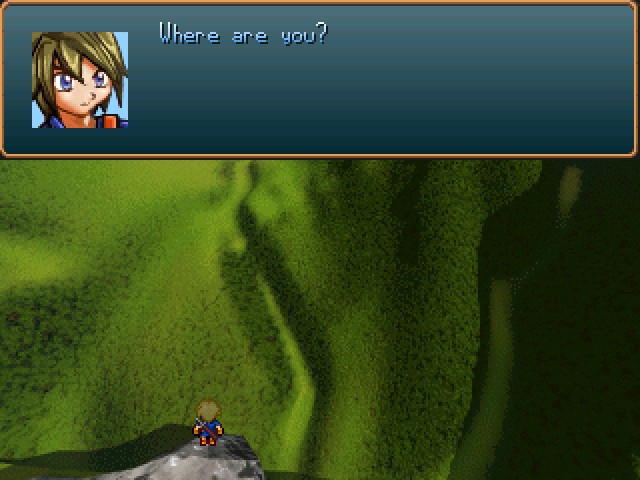 Sorry, but I hate these background scenarios... sigh

I liked the music, but I absolutely love the main theme (Way - A time and a place) that it's played on the starting menu and at the end of each episode, very emotional in my opinion.

My verdict is this: play this chapter if you have the time to play the entire saga, as this is only an appetizer and the real treat will come later (also some things introduced here like the "Traziun points" seems to be dropped and won't be used at all in next episode).
Play this if you want something different from your ordinary fantasy jrpg, if you'd like an immersive story that will be told you and if you do not care about loot because playing this you will instead care for the characters you'll meet and learn to love or hate. And you surely will also yearn to know "what happens next".
I cannot deny that at first the semplicity of this episode, the lack of equipment, money and usual trappings left me confused as it looked like a simple and average game, but the truth is that no author doesn't throw you the best all at once, instead it builds his masterpiece with time.

And this is the first brick.

Close
11/20/2018 06:59 PM
I have to admit: The Way, in retrospect, wasn't really my cup of tea. The story features one of the most contrived plot twists I've ever seen in a JRPG (or any other story-telling medium), and the mini games aren't really fun. To make things worse, Episode 6 (the finale) is technically the most impressive one, but also story-wise the most disappointing one (except for the "bad ending").

On the other hand, interested players should give the series a shot just to see the spectacular things that developers could already achieve with RPG Maker 2000 over a decade ago when most developers had already switched to using RPG Maker 2003 (though The Way Episode 1 was already released in 2002). Nevertheless, The Way is also testament to the fact that implementing many custom systems doesn't necessarily make for a satisfying gaming experience. Your review, TheRpgmakerAddict, does a good job of explaining that The Way isn't a classic JRPG. It's unique, and I would also encourage players to at least try it out.
TheRpgmakerAddict

Close
11/21/2018 07:24 PM
Thank you very much.
I said this was one of the first Rpgmaker games I played, but the first was Fifth Era: fragments of the holy stone. This was a great italian rpgmaker game (you can see some videos on youtube including a complete walkthrough), sadly untranslated, by the author of Theia the Crimson Eclipse (soon to be translated). Tehn I moved to others until the recent Skydancer... some are parodies, others are serious but all these games had a strong Final Fantasy structure.
The Way was different. Totally different.

I agree on the plot twist, on the bad mini-games (for example Fey have better ones, but well these are just diversions and I do not care much about them) but I think that here the Rpgmaker 2000/2003 (my favourite editions) was utilized in an interesting... way! Some classical jrpg things were mantained (the combat), other things like the Plunge were interesting, and while not implemented perfectly, nonetheless I admire the choice to made something new.

I had a lot of fun playing episodes 1-5. Not the 6th. (that coincidentally is where the game becomes more usual- Exp points, party system and more dungeon exploring in the classical sense).
Pages: 1