By all that's unholy

Unholy sword is I can only assume an abandoned game, or at the very least the last update was in November 2013 and the developers last post on this site was a month later, so it's probably not going to be any more complete than it is now. Its basic premise is one that whilst far from unheard of, is somewhat rare, play as the villain of the piece. In this case that villain is Balbino a Half-Orc/Half human warrior and it's the half human part of his genetics that is getting him in trouble. He's not trusted by the other monster types and therefore feels the need to prove his general evilness to all and sundry. 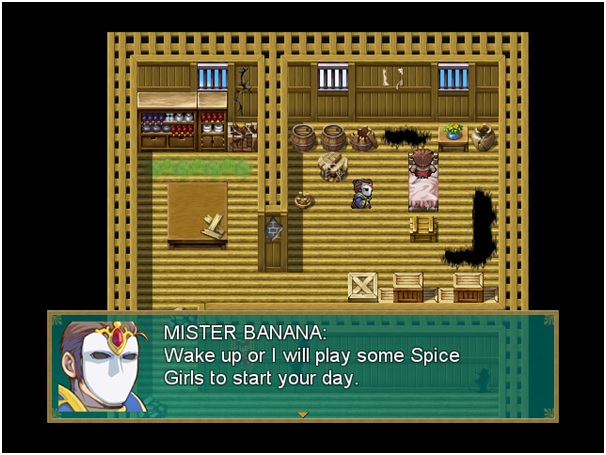 No doubting his evil credentials.

To this end he's sworn his allegiance to the Great White Dragon, forever known as GWD, head overlord of all things evil and dastardly and who of course has a suitably malevolent castle perched high on a mountainside just beyond the confines of the little village in which the game commences. After years of faithful service to the GWD it's finally time for Balbino to prove that he is as evil as he claims to be and put to rest all those rumours about his potential humanity once and for all. It seems that the realm of darkness is being menaced by that most insidious of characters, the generic hero types.

Five classic RTP heroes, Adam, Leticia, Clark, Lilian and Adrien are currently making their way towards the castle of GWD and it's your job to stop them in their tracks, hopefully in the most gruesome and evil way possible. The desecration of holy sites, frightening of children and kicking of puppies along the way is optional but highly regarded. To add some spice to this confrontation, not only are you going up against the heroes, but GWD has pitted you against another lackey in his employ, Lars, a small-minded mercenary with an intense hatred for the product of miscegenation. The minion who stops the heroes will win untold prizes and accolades, the loser, well best not to think about that too much. 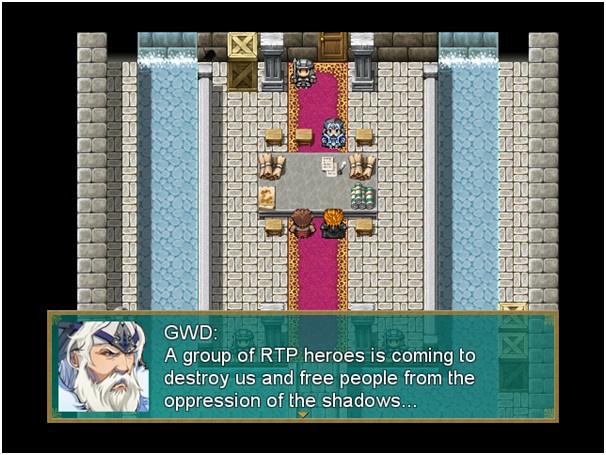 Well we can't be having that.

To aid you in your quest to defeat the goody-two-shoes GWD has pointed you toward the Tower of Power (pretty sure there should be a ™ after that) to find the location of the titular unholy sword, with which you'll be able to smite everything smiteable in a 10 mile radius. That's the good news, the bad news is he's also saddled you with his social media addicted gender ambivalent son Prince Lulu, who appears to be male in regard to dialogue but whose character description and let's be honest, name, sites him as being female, and whose face-set could go either way.

I think this confusion has more to do with the fact that the game developer is Portuguese and certain gender nuances are different in a language with gendered nouns as opposed to English which hasn't had them for 700 years. This also helps to explain some of the spelling and grammatical errors that pop up on occasion throughout the game, and make some of the jokes fall a little flat. Though since the humour is fairly juvenile in its approach it was never going to be a big hit with me in any case.

The graphics in the game are almost entirely RTP with a few additional graphical elements thrown in for a bit of variety. The mapping is fairly standard; nothing stands out as either above or below the average and the maps are easy to navigate without any obvious passage errors. There is a helpful little addition to the world map, a 'heads up' to let you know before you enter an area what level the monsters within it are, and an option to enter or not depending on your current level. 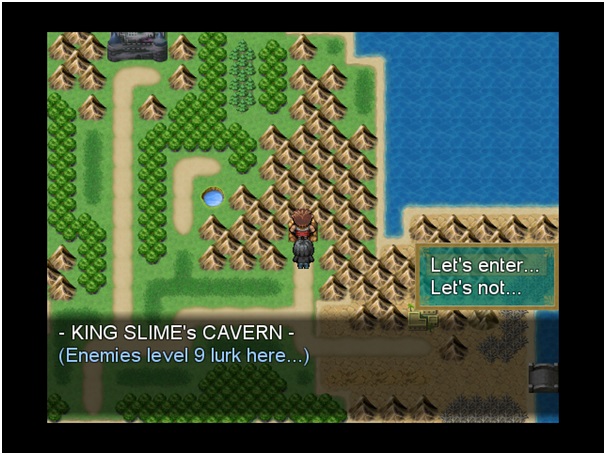 This mechanism actually allows you to up the challenge level if you are finding that the combats are a little easy. Which you will, they are not badly balanced but they are definitely on the less stressful side of the equation. They are the classic turn based, and also a little bit of a button mash for the most part. Skills start to kick in around level 3 for most characters and until then your only option is attack. Even after the skills do become available they are pretty much the default skill set, though with a few strange changes like 'shout' is suddenly an all-enemy wind spell, but overall not much in the way of additional strategy is required.

This game is replete with real world references and most of them get repetitive and irritating fairly quickly. Prince Lulu's facebook addiction and text speak becomes quite grating though I do have to give it points for being internally consistent. The questions posed in the Tower of Power being all centred on real world musicians is nonsensical and whilst easy does just slow the pacing of the game. In fact that is a problem throughout the game. There are quite a number of overly long and ultimately futile dialogue scenes that could and should have been removed, as they serve no purpose other than to drive home points about the characters that have already been made numerous times before.

After making your way to the top of the Tower of Power and not being given any actual help by the Wish Bringer who lives there you have your first encounter with the generic RPG heroes, who proceed to wipe the floor with you and then pity your beaten and bloodied bodies as they head off on the next stage of their world saving journey and you drag your sorry selves to the nearby elven village to recuperate, and that's when the demo ends with a quite nice little 'to be continued' panning shot. Of course that game was never continued, or at least has not been for over 18 months at this stage.

In the end Unholy Sword isn't worth the time you take to play it, it's not bad; it's just unpolished and made by an inexperienced hand. The premise isn't terrible but the execution leaves a great deal to be desired, and it needs an edit in the worst way possible. Not just for the multitude of spelling and grammatical errors, some of which can be attributed to the developers nationality, but also to reduce the amount of filler in the dialogues and produce a better flow to the game. I doubt that will ever happen and this game is all it's ever going to be. As such I wouldn't bother visiting.