Well, I was looking for something short, sweet, and old to play on the site and managed to stumble across this old community game. Sadly at the time of writing this review, I haven't finished the game itself. On the other hand, I honestly don't know when I'm going to come back to this one because it's a royal pain in the @$$ to get through.

The current download for this game is simply missing a ton of files. So many in fact, that I'm honestly starting to wonder if this game was meant to be played within the confines of the illegal version of RPG Maker 2000 itself rather then as a standalone project. After all, the download doesn't even include the standard launcher and harmony.dll file for this engine. And that's not even getting into all of the standard background and effect files that are missing. As you can imagine this makes for a really shitty experience if your trying to play through this game like a standard project because you'll be running into missing files every few minutes. In fact, the game crashed on me almost half dozen times during the first battle alone because of missing files. And it easily crashed more then a dozen times before the first battle even took place. As a result it can be a real slog to get through this game. After all, every time the game crashes you need to copy and paste an image file into the appropriate folder and then it give it the name of the missing file.

To make matters even worse, this game was designed with smaller screens in mind. As a result, the game tends to crash right out of the gate on newer machines because their usually attached to a monitor whose resolution is to high for this game. Thankfully, you can readily fix this in Windows by telling the program to launch with a screen resolution size of 640 by 480.

On the comedic side of things, the game appears to be built on a lot of in-jokes and references that you'd only get if you were part of the group crafting this game. As a result, the humor tends to fly over the heads of outsiders like myself. After all, I'm not in on the joke. So there isn't any reason for me to laugh. And, it's hard to enjoy yourself when your needing to stop every thirty seconds or so in order to add additional files to the game.

The mapping seems alright from what I've seen so far. At least if you ignore how weird the game looks as a result of me adding or copying files in order to cover for missing ones. As a result, you sometimes get weird sights like the one below. 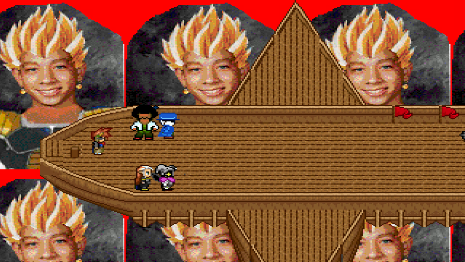 "The Easy Mac Game" is a classic that might just be better off forgotten and buried. At lest until someone comes along to provide a download with all of the files needed to run this game. As it stands, I'd honestly suggest that people give it a wide berth. Since your only going to be able to get through this mess if your willing to knuckle down and replace files as needed as well as play through large chunks of the game over and over and over again.