Whole lot of nothing going on

One of my immediate reactions after getting into this game was a visual one, something I would normally make a negative comment about, the maps are so empty and monotonous, but in this game that is intentional. Set within the measureless expanse known as the Vastness, a seemingly limitless realm with sand stretching to the horizon and only the odd outcropping of rock or abandoned building to break up the mind numbing monotony, the lack of any features is to be expected.

The game starts with a retrospective first person narrative, which does somewhat defeat the immediacy of the protagonist's predicament, but it does have the advantage of being short and succinct.

You play as Jess, a young woman mysteriously transported to this bland and repetitive realm for no reason that is explained, waking up in a mostly empty ruin littered with the detritus of life, broken pottery with a crust of bread, a bookshelf full of incomprehensible tomes, a simple straw filled bed and a disturbing journal entry from a previous inhabitant. Nothing here can aid you in your current situation so you are soon forced outside and confronted with a sea of sand seemingly without end, and a strange creature who unaccountably knows your name. Before you can engage in more than the most rudimentary conversation you are suddenly forced into a battle, though not with the creature that confronted you, and end up inexplicably poisoned.

This isn't a good start, inflicting status ailments are fine, but when the player doesn't have any way to alleviate them and no immediate indication of how they can it becomes problematic. Helplessness in the face of natural obstacles is one thing; artificially manufacturing those obstacles is another.

Given your now perilous situation it's time to quickly assess your assets. The ruin you have just exited though dilapidated is a form of shelter and can shield you from the harsh blazing sun. Just outside is a ruined well empty of any water and a scraggly tree devoid of leaves but sturdy enough to provide you with a bough to use as an improvised walking stick, or weapon if you run into any more of the less friendly denizens. Whilst having a couple of the items necessary to survival is comforting, the remaining item you find in the fenced confine around the house makes further movement imperative. Staying here isn't a viable option if long term survival and possibly escape is the plan. 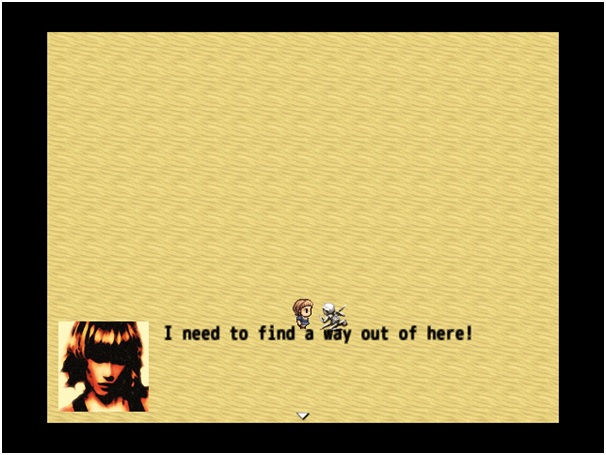 At this point you have three options, north, west or south. East is blocked by a password protected gate, but the password is only a single map away from your starting point, though you do have to wander around to find it, but the most pressing issue is finding an antidote so you can stop pumping toxins through your system with every step. From now on you pretty much just slog through boring mostly empty map after boring mostly empty map. It's the mostly empty that provides the clues however. Each map has at least one feature. Some provide information in the form of notes, which in one case oddly changes graphic into a shovel before reverting to a note again which is obviously a mistake but could actually be turned into a feature with a bit of flavour text, others have geographical features that lead to other maps.

One of these will eventually get you to a shop and another enable you to unlock that password protected door and find out why that section needed to be treated as special. In the end for all the preliminary visual clues, it really wasn't.

Whilst the blandness of the desert maps could be excused, though it's obvious the developer has never spent any time in a desert, it's much more shaped and picturesque than flat plains of endless yellow; the maze behind the gate is another story. It's a created structure and therefore should include features. Even if it is such things as cracked walls and the rotting corpses and desiccated bodies of the previous victims who fell afoul of the monsters that prowl its twisted corridors. With the exception of one flavour note, which is nonsensical, trust me if something is chasing you through a darkened labyrinth you are not going to take the time to pen a quick missive to be found by the next traveller, there is nothing but monsters who instadeath you in this place.

However before you get there you need to traverse the rest of the beach that never ends, which includes a fairly annoying dynamic. One way transitions, which when used well can aid in immersion and world building, but that is not the case here. Here they are obviously used to prevent the player from actually having any control over the movement of the character. Not the character's feeling of helplessness, which would fit in the framework of the game, but the player's, which doesn't. This could be easily remedied with a section of dialogue about the futility of backtracking, or outraged annoyance that the way behind has been closed leading to only one direction to travel. Because no indication is given in game the player just ends up circling the square of the third external map, no matter your starting point this is always the third map, until they head inward to find the next point of exit. 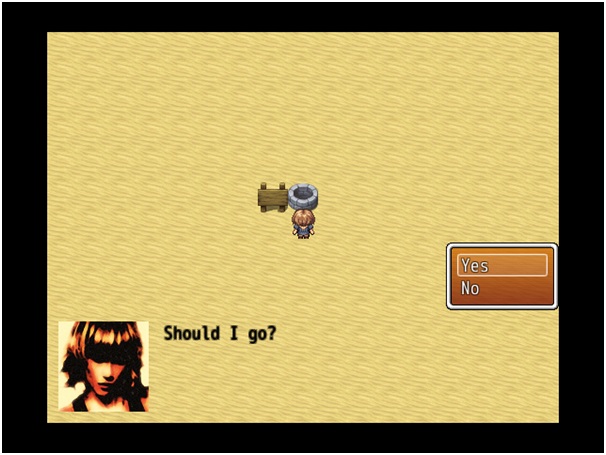 Down the rabbit hole you eventually end up at a shop run by an actual rabbit, well the face set is a rabbit the sprite is the default hooded Bedouin, and go looking for an antidote, but there isn't one for sale, in fact there isn't one in the entire game. So the trek through the yellow sands to find this place becomes just another exercise in player irritation. The rare random battles can never be fought because the nature of the poison dynamic means you are wandering around on 1HP all the time, so including them in the game is pointless, since you either successful escape or you die. You can however spend your few scavenged GP on some healing items, but given the depleting nature of poison using them is fruitless. Resource management is a perfectly legitimate game play mechanic, but wasting resources is just irritating.

I should take a moment to discuss the graphics, apart from the sheer monotony of the maps. The mapping is all RTP, but there are odd face-sets included, the main character as shown in the screen shots, the monster of the eyes looks like a re-coloured reaper and the shop-keeper looks like Bigwig from the movie poster from Watership Down, to say they clash is an understatement. The most jarring is the final battle in the normal ending; you are up against the angry sensei from Ansatsu Kyoushitsu. One thing aesthetically that does mostly work is the music. Almost all of it is from Kevin Macleod except for one discordant piece that unfortunately is the predominant theme in the outside scenes, but within the confines of its use it is appropriate.

The game continues in this vein of one track movement and general pointlessness until you finally come up against the mysterious creature you met on first entering this world. It makes the request it has been making in every encounter, to look into its eyes and just like every other time you as the player have no opportunity to actually choose to do that or not. The developer has at least given the player warning that this encounter is going to turn deadly (not that you can choose for it to be otherwise) so those scraps of bread and cheese you've been carrying around can be consumed to bring you up to almost full strength before the battle starts, but of course the poison is still flowing through you so the chances of survival are slim, and the outcome predetermined. If somehow you manage to luck out and actually survive, the game falls back on one of the most trite plot devices in the book. Though at the very least you do get the satisfaction of knowing that is only the normal ending. The 'good' ending requires you to make some counter-intuitive choices; in fact some dev prompted negative ones. And though you face a different enemy the problems are the same, heavily poisoned, under equipped and relatively defenceless, and the ending you do get if you mange to beat the odds is pretty much the polar opposite of what a normal mind would consider good, though it does at least showcase some form of character growth. The first the game has included. 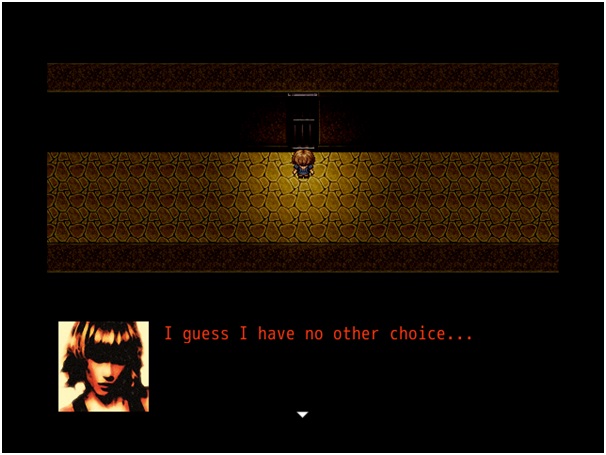 At the end of the game an address is provided to the short story that inspired it, and being curious I read it, it would have been better if the developer stuck to the original idea outlined in the piece of prose especially in regard to the monster of the eyes, and the actual deserted nature of the Vastness. That story for all its lack of polish carried a sense of intrigue that was unfortunately lost in the transition.