The Dinosaur Festival is one of those games that it is easy to stick into the too cute for words category and forget about, and don't get me wrong it is indeed cute, if it wasn't for the fact that dinosaurs are traditionally scaled or feathered I would have called this review It's so fluffy I could Die. I was asked to play this by a friend who is an infrequent and non-registered member of this site to ascertain if it would be ok for his young daughter to play. I was happy to tell him it was indeed. That isn't to say this game doesn't have an appeal for the older ones of us, whether we are still children at heart or not. Though I will admit to a bit of bias here, I was a bit of a budding palaeontologist when I was growing up so mention dinosaurs and I may as well be 12 years old again.

Still the dinosaur festival does touch, albeit lightly, on some darker themes, but in a subtle way that a younger audience will miss and indeed I may be interpreting them in a way the developer didn't intend and finding a touch of darkness where there wasn't any.

The story begins as Mamasaurus awakens from a frightening dream, she has foreseen the death of the sacred tree under which all of the town's eggs, including her own, are placed to finish their maturity and hatch. If she cannot avert this fate, the children will be trapped forever as eggs, never to be born and without the evil absorbing powers of the tree the valley in which her home is situated will wither and die. 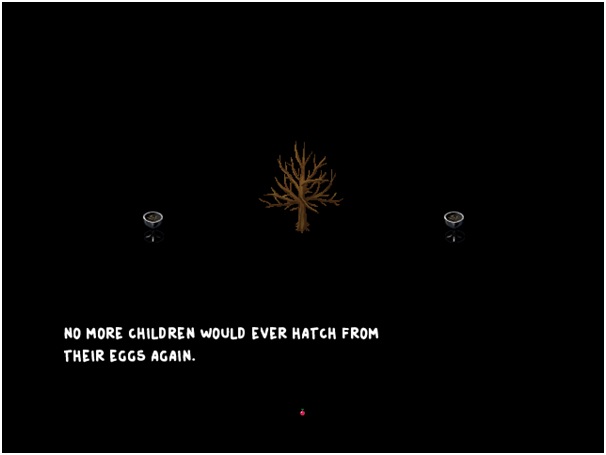 Brushing off this vision as simply a nightmare Mamasaurus and her adoring husband Charles prepare for their big day, Charlie Jr is going to be born today, so it's time to collect the berries from the sacred tree and bring the newest member of their family into the world. Charles Snr is being ragged on by his boss; it seems you can't escape the rat race even when you are a dinosaur, so it's up to Mama to head into town to collect the love berries from the tree to feed Charlie Jr when he breaks into the world. Along the way a bit of light game mechanics are explained before Mama makes it into town to find her worst fears, or more accurately nightmare, has come true. 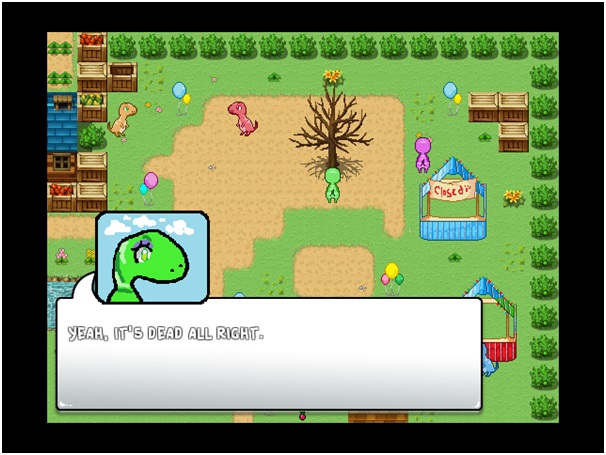 So since Mama wants her egg to be a newborn she decides the only way to fix the tree is to discover what is wrong, and make it right, in that vein off she goes to discover the source of the tree's malaise and to set the world, or at least her green and pleasant corner of it, to rights.

The remainder of the game is pretty much a fetch and conversation quest, talk to her fellow saur's and piece together the clues to discover just what it is that ails the tree and how she and the other villagers can ensure its health and therefore the health of their children. Given the cuteness that is prevalent throughout the game it's not a stretch to assume she does discover the reason for the tree's illness and the way in which it can be assuaged.

The game is quite short, which works for the type of adventure it is, and indeed for a younger audience, but I would really like to see an expansion of this story. Not so much this particular tale, but additional segments where Mama and her friends and family go on to other adventures. Solving short lived but equally important problems could be a great way to expand this world and there is definitely potential to do that.

It might be a bit adventurous, but it would also be great to see custom graphics for everything in the game. The sprites and face-sets are wonderful, and very much in keeping, but the remainder of the graphics used, whilst used well enough with only one obvious passage error I found, do have an inevitable mismatch though that has been assuaged somewhat in the depreciating way the modern setting is accepted as the way things are in a world where dinosaurs still roam.

All in all The Dinosaur Festival is a cute short game that is family friendly and has a sweet and happy ending that still leaves you wanting more.