The Last Girl on Earth

The Last Girl on Earth is a short RPG made for a 'make a game in a week contest' from an external site, and it shows. Not so much in content, but in length. Last Girl comes in at around 30 minutes from go to whoa, and that is a shame because there is a bit of potential there that could be expanded on, if the developer took the time to do so. Within the confines of the competition of course that was impossible, but now the sky could be the limit.

The game has an unusual visual element that you get from the first moments; everything is in black and white. It's not unique in making that choice but it's one I have only seen rarely, and ever rarer in the fact it extends to everything, not just the tile sets, but facesets, menu, items all of it. No explanation is given for why the world is in shades of grey but after a few minutes of adjusting it fades into the background and just becomes the landscape. The graphics, for all their leached look are mostly edited RTP, and whilst not spectacular are functional with only the occasional passage error. The music is not RTP and is developer created and available on soundcloud, the go-to place for something beyond the default. The themes are used appropriately, if not with any notable finesse, though I'm far from a fan of the midi gameboyesque sound, and there were time I preferred to play in silence rather than listen.

The game starts with a bucolic scene, a young mother singing a bittersweet lullaby to her daughter and then telling her a story as she settles in to sleep; the story of Laeta, the Last Girl on Earth. 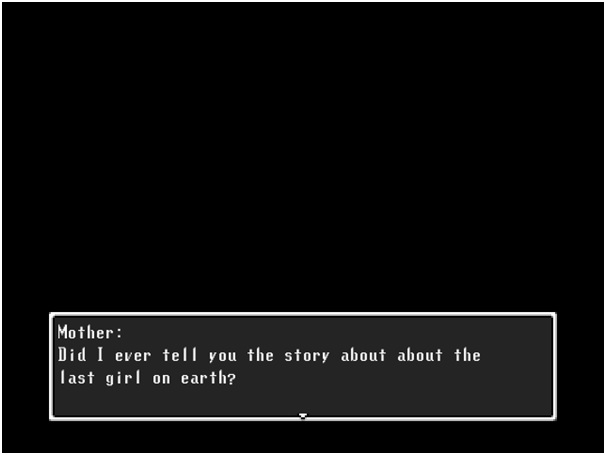 Listen child, as I weave a tale.

Laeta is alone in her small cabin, left so by her parent's inevitable death and she lives each day alone, going through the motions. Eating when she is hungry, sleeping when she is tired, but with no real motivation for anything. She awakens one day and decides that mushroom soup is to be on the menu and therefore she must source the wild mushrooms from the forest near her secluded home. Now whilst there appears to be a dearth of humanity, monsters are in steady supply and she's soon taking on forest slimes and the like in her journey. The combat is the classic turn based, with a sideview battle screen. The learning curve for skills isn't steep and is handled pretty well. Though there is a small issue in the shades of grey palette that makes itself known in the battle screen. Since the font is somewhat stylised and pixellated and the HP and TP counters are also shown in grey it's actually a bit of a chore to determine just how you are doing in battle in regard to your remaining HP/TP, you have to really concentrate rather than just being able to take in the information in a glance as you normally do. I will say on the upside though the custom animated battlers are a nice touch.

Also it seems that mushroom hunting is much more dangerous in Laeta's world than ours, in this one the mushrooms fight back. 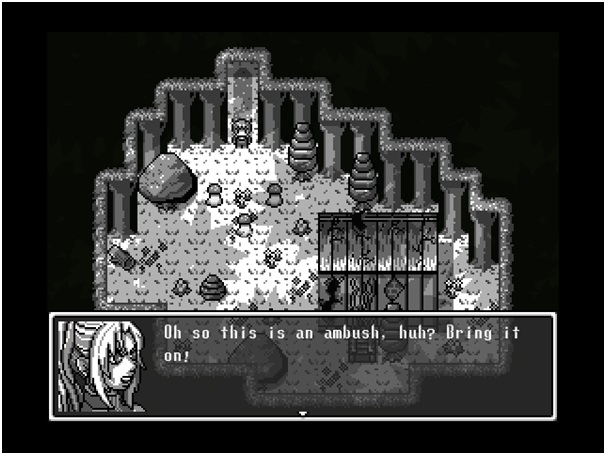 Sliced mushroom coming up! Well pincushion, she is an archer after all.

As is to be expected for most of the game Laeta is alone (oops, spoiler) and I appreciate the developer has taken that into account with his balancing of the enemies and the skills available to Laeta as she travels, and also in the small things like having poison not be one of those out of battle ailments, if you make it through a battle you are automatically healed of ailments at the end of it, which given the number of enemies that hit you with poison and the scarcity of antidotes it is very much needed. That's not to say the battles are easy, with all of the skills being powered by TP and also locked to a cooldown period whether they are successful or not and most of the enemies being in groups of 2 or 3 Laeta never has a particularly easy run of it.

So after a feast of well deserved mushroom soup and a few moments of introspection on her plight, which though a little heavy on exposition can be easily explained away by the fact that she's probably used to talking to herself and voicing her thoughts aloud, Laeta heads off to restock her berry supply and gather enough to make a few extra pots of jam to put away for the coming winter, and of course this is where we find she may be the last girl, but she isn't the last human, and that lullaby comes into its own. 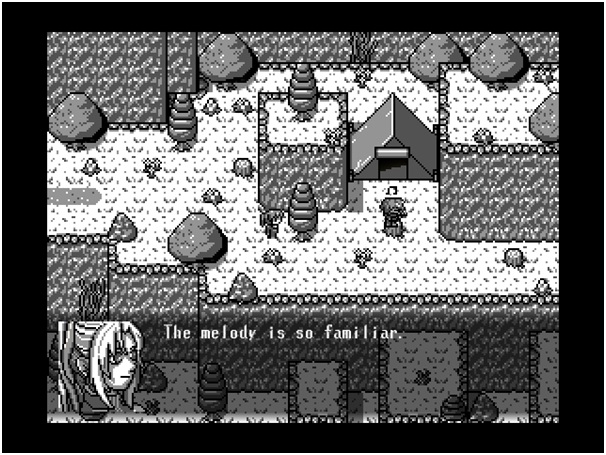 If music be the food of love...

Though as is soon seen, music does not soothe the savage beast and in the case of poor Vincent's playing, it actually incites them to violence, luckily for our flute player, Laeta is an excellent fighter and soon gets him out of his predicament. Though things are not smooth sailing for these new friends as Leata has to deliver some sad new to her new companion before the story reaches its conclusion.

There are a number of unanswered questions raised in the game, not the least of which is what did actually happen to the remainder of the human race other than the small bit of exposition we got on it, and why it is that Vincent is living with his uncle rather than his parents, and indeed if they are of an age why given the proximity of their homes Laeta never knew Vincent when she was growing up. Still those are all subjects on which the developer can perhaps expand if they decide to push this little game beyond the confines of a made for contest version. I do hope they choose to do so; I'd like to see where it goes.

I would make one minor correction, and that's the fact that I wrote all the music myself. Their not outsourced, though, some are recreations of another project I am working on. I simply have it available for listening pleasure on my soundcloud.

Thank you for taking time to write this review. It does inspire me to return to the project for some updates and possibly a continuation of the story to answer those question you have!
nhubi

Close
09/13/2015 07:11 AM
Thanks for the information, I'll update the review to reflect that. Good to know you're planning on heading back to it, I would like to get a bit more of the backstory.
Pages: 1