No One Rolled Cleric?

I'll be honest; I don't think I've ever gone to a Dungeons and Dragons session without some sort of argument breaking out at least two or three times during a campaign. Whether it be a disagreement over why our Level <4 got into an encounter way above our difficulty or because the new guy just ate half of the pizza without chipping in, one of the best experiences of tabletop roleplay is setting aside our problems and becoming better people for it. Those goblins won't kill themselves. Usually.

Wednesday's Knights is an attempt to relive that experience, and is a short RPG based around a group of strangers and loose acquaintances gathering over winter break to play a rousing game of DnD. Rather than follow the story of heroes saving the world, Wednesday's Knights focuses more on the unnamed and unseen players.

Each player in the story has a character which they (occasionally) speak through, and consist of some rather strange race/class combinations, likely a nod to that one guy in every group who needs to have some sort of goofy character to round out an otherwise serious part. The party eventually rounds out as a caster, two damage dealers, and a paladin of sorts. While it does seem like a solid party in theory, the way the battle system is handled dilutes their roles somewhat, and the four characters never really seem all that much different in terms of power.

Much of the experience comes from the opening story, which humorously chronicles the four characters coming together for the sake of the players' patience. Refreshingly, the story never aims to make any sense or take itself seriously, and the custom pixel visuals and original soundtrack help set the overall whimsical tone for the plot. For a game that was made in a week, there is an extensive amount of love put into its presentation and character. Kudos to Tuckie for working as hard as he did getting this game's aesthetic in such good shape in the amount of time that he had.

While most of the game revolves around the opening story, the second half is combat-driven, consisting of one short dungeon with some simple, silly monsters and hand-drawn loose-leaf battlebacks. You're given an opportunity to buy some equipment before setting out, and thankfully what decisions I did make were not make-it-or-break-it for the outcome.

Combat is more or less the standard YEA Battle Engine with a few unique elements to it. Rather than straight damage, every character has a damage range for their attacks depending on their weapon. For example, a sword may deal 1d6 damage rather than a staff which deals 1d4, and spells can have different ranges as well depending on stats. Some skill descriptions mention stat modifiers, which are additions to to a skill's effect based on how high that stat is. But since the status screen is the vanilla screen for Ace and doesn't list your modifiers, you'd really have no way of knowing what your modifier is (if it's in the game at all and not just flavor text) unless you knew from playing a tabletop RPG. Similarly, your characters sometimes gain an extra turn for rolling a 20, which is never explained. 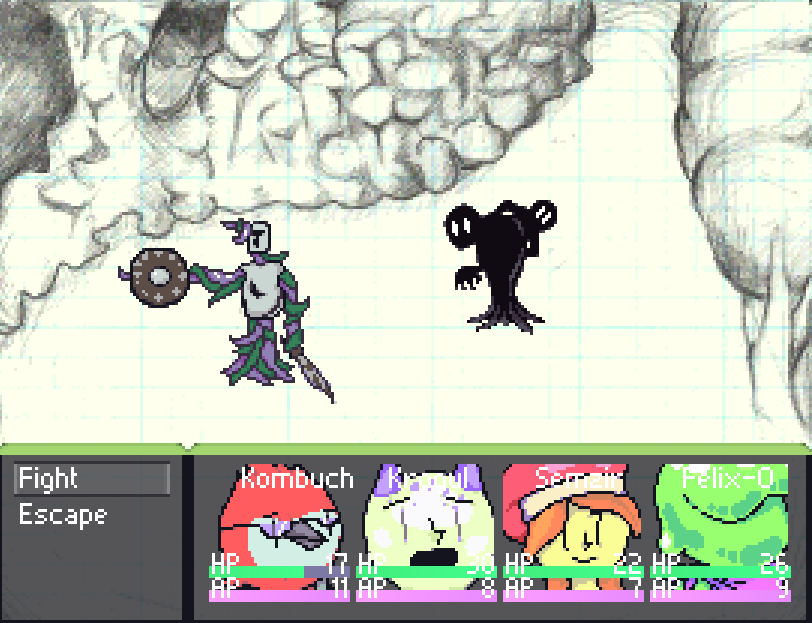 Encounters are fun to look at, though not always worth fighting.

Combat also tends to be very slow, since enemies have beefy amounts of HP and your base stats other than HP never increase at level-up. While enjoyable at first, I found myself consistently running from encounters towards the end of the game's singular dungeon because of they were such a huge time investment for oftentimes little payout.

There are also a few bugs to note if the developer ever decides to revisit this. There is a healing spring before the boss that doesn't work, and the boss itself has no battleback or graphic, though I don't know if this was just unfinished or symbolic for the events that unfold among the players during that fight. I also found a staircase that could leave you permanently stuck should you go back through it a second time.

But gripes aside, I had a lot of fun with Wednesday's Knights. There's an incredible amount of love for the subject matter here, and the developer really put his heart and soul into the project. If you don't mind it being a little rough around the edges, give this game and its goofy rabble of heroes a try.

Similarly, your characters sometimes gain an extra turn for rolling a 20, which is never explained.

Actually this is explained in the game. Or at least it was explained when I played through the game during the tutorial battle with Felix-O. Close
03/19/2016 04:57 AM
I stepped back from checking this page for about a month, since views seemed to slow down, and of course that means downloads needed to have practically doubled since then... that being said, I'm really surprised to see this much more activity here! At the same time, I'm very sorry I didn't see this any sooner. This being the first game I've released, I'm not too keen on how I'm supposed to respond despite me feeling that I should. I'll try to give answers to some of the more questionable aspects you mention.

"No One Rolled Cleric?"
Well, not exactly. The races and classes in this game were taken from a WIP roleplaying system a friend and I worked on a while ago. Th class of the slime character, "Bravo" is actually the closest thing to a cleric our system has. We kind of designed it as a "battle pop star", and thusly all of its abilities are loosely based off of 80s one-hit wonders. The whole system reeks of that kind of humor. An enemy I designed but didn't have a chance to add to the game was a smaller version of the minor grub, aptly named the "Minor Miner Grub". I can't state enough that Earthbound is one of my biggest influences, so it's hard for me not to make goofy games.

"...strange race/class combinations, likely a nod to that one guy in every group who needs to have some sort of goofy character to round out an otherwise serious part."
I am of the opinion that we all have a little of "that one guy" in us. Some more so than others, certainly, but I won't believe that there are role players who never make up a goofy characters. I could go on for hours about the bratty 10-year old I'm playing right now, or the time I rolled a thief that I convinced the rest of the party was a reluctant mage the first half of the campaign.

"Refreshingly, the story never aims to make any sense or take itself seriously, and the custom pixel visuals and original soundtrack help set the overall whimsical tone for the plot. For a game that was made in a week, there is an extensive amount of love put into its presentation and character. Kudos to Tuckie for working as hard as he did getting this game's aesthetic in such good shape in the amount of time that he had."
The assets of the game, I believe, were probably the strongest bit of the presentation, but also it's downfall. Out of a 7-day event, I spent roughly 4-days spriting, and composing the half of the music that wasn't made in tandem with a friend of mine. I certainly would have like to polish the rest of the game more if my spriting hadn't taken such a large chunk of time.

"...no way of knowing what your modifier is (if it's in the game at all and not just flavor text) unless you knew from playing a tabletop RPG."
They are in the game, but a little more under-the-hood. For instance, there are no "official" stat modifiers added to abilities, rather I add (stat - 10)/2 to abilities where applicable. One thing this game admittedly doesn't do well is explain it's system well enough. Part of this is for storytelling reasons, as I wanted to create the experience someone new to role playing would have (hence the weird race-classes etc.), but more could be done to teach the players how to play. I have received a lot of flak for the one-stop shop that doesn't allow players to assess their characters beforehand.

"Combat also tends to be very slow, since enemies have beefy amounts of HP and your base stats other than HP never increase at level-up."
The combat is slow. I have no excuse for that. A lot of it is that I have a really long animation (14 frames or something?) for the "dice roll" sound effect it uses way too much. Since there was no going back to shop or an inn, I had to make the combat last long. I tried to offset it by autohealing characters after battle, but it doesn't help much. Honestly the combat is painfully easy if you abuse Kromgul's ability which stops enemies. By using that every turn, my tests beat the boss (i.e waited the 15 turns just defending) at like level 3. Also, the level cap is in place, I've explained, because progression is only handled through more abilities, and I simply didn't have the time to make a bunch more levels worth. You pretty much have enough tools to win by level 3, as I said.

"...the boss itself has no battleback or graphic, though I don't know if this was just unfinished or symbolic for the events that unfold among the players during that fight."
There isn't supposed to be a battleback, but there is a sprite for the boss... What I tracked it down to be was a "fadeout screen" event that wasn't resolved before combat begins. He's a larger and more detailed version of the "ting" from the boss room. His file is in there with the rest of the battlers. Also, I didn't encrypt any of the game data, so looking through or using any of the sprites from this is fine by me.

Honestly, I would have thanked you for just playing through the game. To write a pretty fully-fledged review is just astounding to me. This being the first game I've ever publicly released, I am really happy that it has this much attention, however small. I entered the game jam as a test to see how much a fully motivated me could put out in a week, and I'm pleasantly surprised. Before this game, I never figured I would be one of those developer's who are viewed mostly for their writing, so I never put much thought to it. The reactions to Wednesday's Knights have given me a lot more direction for my larger projects, and I have already begun to bring a lot more substance and meaning to my games, through their writing. Thanks for your kind words, and I hope you enjoy whatever I release in the future just as much!
Pages: 1