Not to be confused with Zelda


The following review is for The Ocarina, created by Tachitus for RPG Maker VX Ace. And yes, the game does borrow elements from THAT GAME. This is the sort of game that it is REALLY hard to review. It's the sort of game where you can see potential for something, but in the end the game just sucks. Let's start with the good stuff. 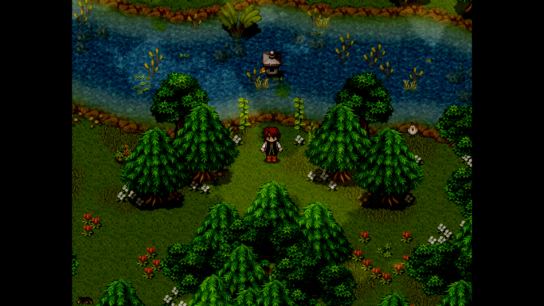 
Well the game actually only has one map. One very good map. This is an excellent demonstration of parallax mapping. The trees are placed nicely, the river makes the map jump to life, and the lighting effects are amazing. Why is there only one map? Good question. This is the sort of game that could have worked well with a larger scope. In addition the area you have to walk around in is very small. So for a puzzle game it doesn't really make much sense.

Now let's get down to the game play. I mean the part where you take out a piece of paper and write down all the music scores and proceed to play them one after the other. Yes, you start the game with a stunning number of 9 songs. And every time you want to play one you need to open your menu and go to the item and memorize the song (use a piece of paper, you know you want to.) The idea is nice. I like the idea of having a magical instrument doing different things. But where's the progression. How about a game where I learn one song and use it many times before I learn a new song. This would have been a much better use of this (instead it just ends up being a chore.) It's equally frustrating that each time you want to play the Ocarina you need to open the menu. And you will be opening the menu a lot. (Pressing one button to open the Ocarina would have been much nicer. This is possible through the use of common events.) 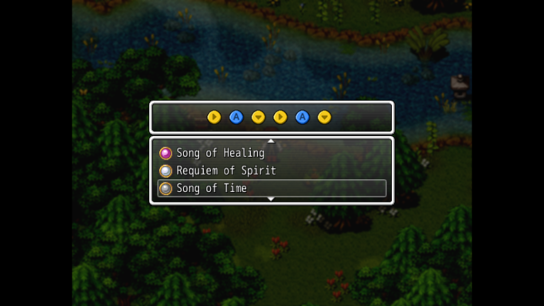 You will remember these songs, but from where?


What does The Ocarina end up being? Well it doesn't feel like a game. It feels more like an idea. A good idea that could have been executed better. My suggestions: Keep the mapping, keep the ocarina, add more maps, add more progression, add a better system for accessing the ocarina, and don't use the Zelda songs. I have decided against giving a score for this game, hoping you take what I have said and use it in any future games you end up making.