To The Tower's Top 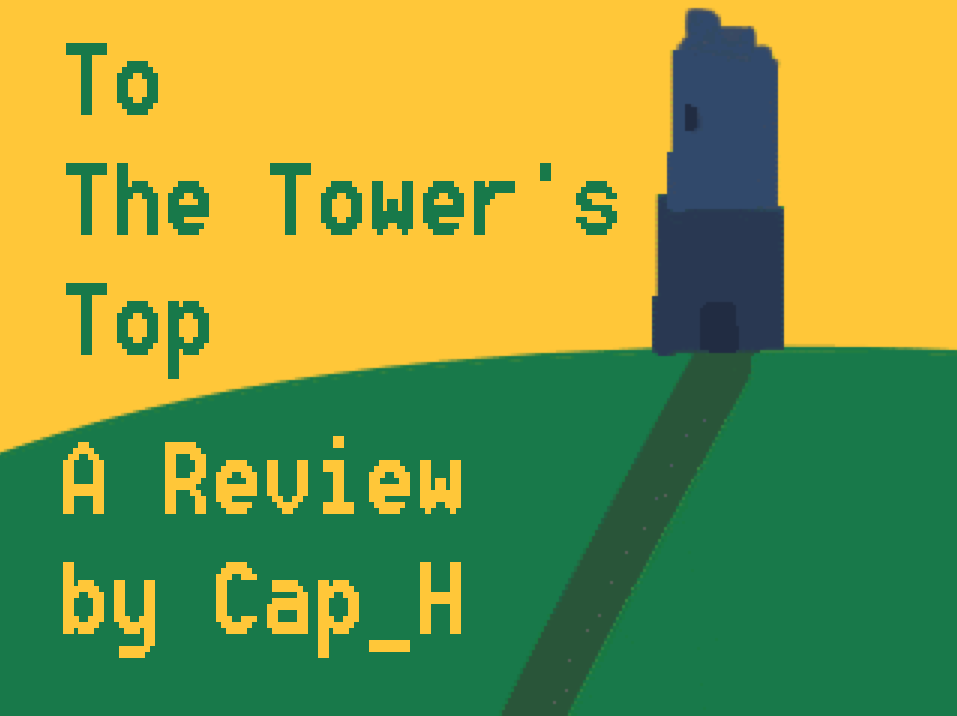 Warning! The review is full of terrors of broken English and dreadful joke attempts.

Two Towers...
Hm, not an overly witty title. And everyone who actually plaid the game knows, that there is a single tower (what a terrible spoiler). They also know, that the name suggests more than an utterly terrible LOTR pun. Like really terrible.
Foremost there were two developers behind the project, which was made as a part of The Swap In The Middle event earlier this year. I guess, this stuff is written in game's description too. Same goes for nicks of developers Ty Uni and a man (I accidentally misspelled them).
The other thing would be, that there are indeed two different towers, the second one being a flat astral plane (now, this is a major spoiler).
Ok, this was the first 'swapsie' which caught my attention. Two major factors were unity's fabled name and cute home brew graphics. And I was satisfied. I finished this game the same day as Bloody, an officially better swapsie, and found it more enjoyable and consistent. This is due to a dramatic differentiation of both parts. In this regard it was a wise move. I will explain why (or end up writing random English cuzz words).

Game DeStilj
I noticed that the game consists from two different parts (it has three parts to say the truth and remind you of a spoiler). The first one was Someone's logical challenge. I liked it. It wasn't logic at all and it took me about ten rounds of clicking on everything to figure the first step. Writing of this part mashed well with its gameplay. Otherwise annoying hurt leg was a result of such a nonsensical lazy behavior I almost liked it. Gameplay elements were well presented in this part. First levels of the tower were functional and finely presented.
This is something I loved about To The Tower's Top. It takes place inside a relatively small tower. All floors are of the same size. They never gets bigger to fit more enemies or an elaborate puzzle. It created a sense of consistency, which helped me to stay hooked as I knew, that I progress with each and every floor.
Unity's floors were designed even better then Someoneman's. It was probably the best looking level design of her, I've seen so far. Custom graphics give maps warm feeling and her multiple level dungeon designs where you should visit various dead ends is magnificent. I consider it better than her map work on Bloody. That one map is bigger but more linear. Here we go through multiple levels with many diverse enemies. To make it even better, battles are well balanced, usually swift. Some monsters can be resistant (I'm looking at you Bowling Joke) and unhealthy for our party. That's the challenge. Distances between restoration crystals are better and The Mimic Merchant is again in. I'm starting to get this Uni-verse under my skin.
Skills are combination of useful, interesting mess and buffs. We basically have two heavy-hitters and a late-coming fairy healer. Dynamic between the first two is simple. There is usually a group of baddies. Each of them has its vulnerabilities and resistances. I recommend you to learn these quickly as they can save your life. The caped guy has thunder attacks up his sleeve. The guardian chick is an arsonist and fairy has a cooler in her pocket. Using vulnerabilities is a basic premise of most battles.
However some foes can be resistant to all three elements. Mana is wasted pretty fast too. It happens often in To The Towers Top, that you are forced to use basic attacks cuz you lack mana.
All three characters have interesting skills of their own too. They give them some real flavor of personality.
The guy uses a certain death chance spell. This one can prove as very useful or totally useless when the enemy is resistant. The other personal skill is a strike ignoring defense. This one comes in handy when you are short on mana as it only costs three of these usually blue annoyances.
The chick has various drain skills. She can replenish both her mana and lives from enemies. Her skills vary the most and are the most fun to use.
Fairy has a mostly supportive skillset. Her attack is weak and her hp pool small. In late game she was healing herself every other turn.

Overall, two parts may clash in their style as there is no real content overlap and unity's part is free of puzzles (I hope I remember this right). As much as it may be a nasty combination for someone, it works for me. Man's puzzling levels give me a chance to get in the story smoothly without annoying early fights. Battles, then, take the majority of time. It's good that I'm ready for them and hooked in the story by the time they pop up. They delayed appearance is a logic one too. The guy tries to enter the tower stealthy way first. 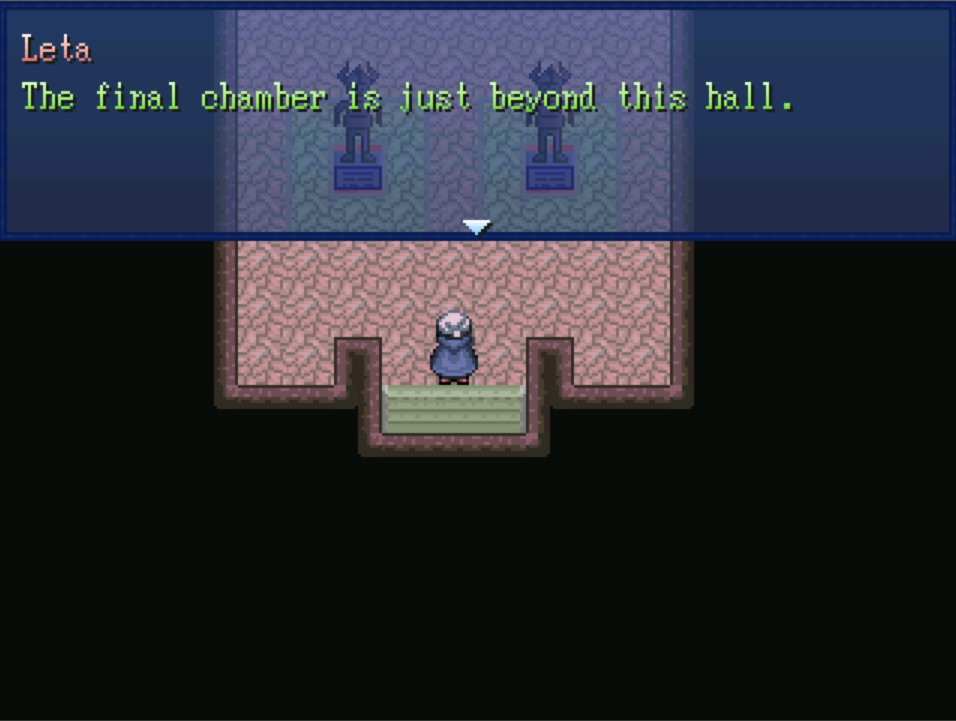 Story
Story is surprisingly consistent. We can thank Someone, that he started low on information. It was engaging writing, tho. I fell of my chair laughing as the guy was all conditions: "I could if..." Logically, unity could do almost anything later on. She chose to make it an epic adventure with the uni-verse being at the brink of destruction. Characters are consistently flat and without an emotional investment (was there something about date? I'm not sure now). It worked well, while being told and was forgotten immediately after.
There are some twists, which are mildly surprising. I got to admit, dialogues are well written with a decent amount of wit. Favorite character: Mimic The Merchant.

Paint.net and Audacity
Here are some of my notes on this topic:
-the title picture is appealing to me. Colors are chosen wisely. It would benefit from an outline.
-there was no time for music.
-Can I do anything in this game?
-Statues are the bestest
-parallaxes are moving
-lots of statues

Graphic assets reminded me of Ebeth's tiles. Color chosen were mild. Someone would say pastel. They gave To The Tower's Top a charming character. They worked well most of the time with few small exceptions and one bigger bugger. Stairs looked strange. In some environments, they were hardly recognizable. 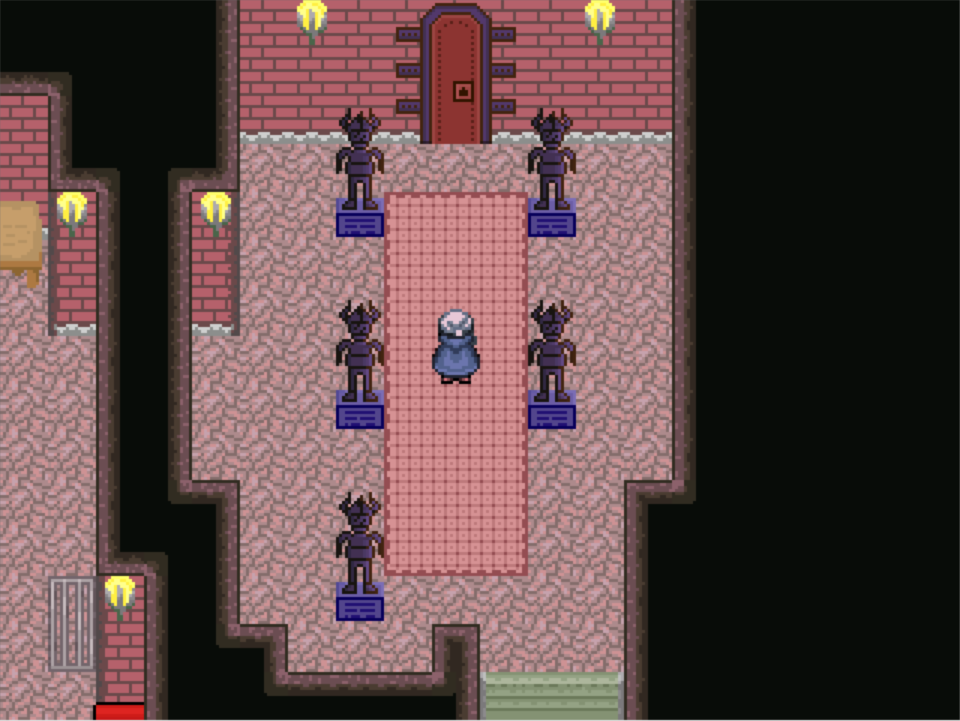 Have I mentioned statues?

Conclusion
I liked it. I guess I pointed out my points. Here is my final note from playthrough. A note on my mighty victory.
-final boss managed to defeat me, got to grind. With a tactical approach, i managed to reach Zaglan with fullbar. And defeated it without items. Gloria.

It's yet another victory for unity and a very first step for some other guy. I should play Luxaren Allure now and learn. Maybe try out Someone's second swapsie.

Close
07/03/2016 12:08 PM
I've always admired your very unique style of writing, Cap. I didn't think I managed to unpack everything that was in this essay, but at least you gave me a keen awareness of what the game was like for you, without giving away too many plot details. I hope. Thanks for writing this.
Cap_H

Half of it is probably caused by my flawed English. Anyway, I'm glad you liked it.
unity

I am sad to say that I haven't heard from Someoneman nor do I know if he's even gotten a chance to play the final game. I'm very interested to see what he thinks of what I did with the final game.
Pages: 1