I know. I rarely review long games, and the reason is simple: short games, of about two hours or less may be good or bad but in any case you don't have to invest too much time and even if a game is truly horrible... I can stand it for a couple of hours, I guess! I always want to finish the games I review, so longer games that need more time invested clearly had to be good.
Umbral Soul? It's very good.

Anyway this was one of the two things I knew about the game before playing it, the second one is that Umbral Soul is one of the very few rpgmaker games in which we play as a villain protagonist. The game begins with a prologue in which some heroes are fighting a final boss. Ragnarok, the Evil God, is defeated and banished, but this is just the beginning of the adventure of Pandora. Who is she? I don't want to spoil the story, but let's say that she is a sorceress who can call monsters from the Abyss and command them (the name is appropriate since in Greek mithology Pandora was the woman who had a jar containing the "countless plagues"). Some traumatic events of her life will lead her to follow Ragnarok in a dark crusade against a world she hates. 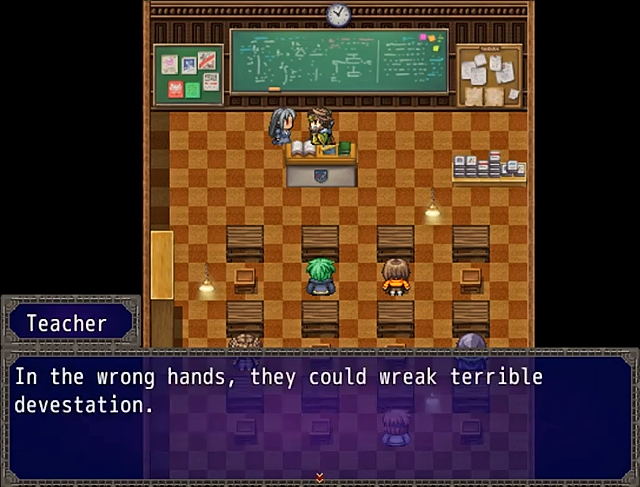 And well, she has some good reasons! From the beginning we will see that some normal humans are the real monsters, anyway Pandora clearly cannot do an epic quest all alone (even if she can evoke and control monsters), and sooner or later some other characters will follow her. As you can probably expect there aren't the usual adventurers or rogues like in the other classic jrpgs, but we have dark sorcerers, demons and a berserker! The good thing is that all these characters are different, masterfully written and described, they have lots of dialogues, personal stories and possess different abilities that will be extremely useful to progress defeating the opposition. Every character has understandable motives and personalities, there are no black or white individuals here, even some of these "good guys" are actually trash.

The world is likewise well written and I liked a lot the attention to the details, concerning the world map I was really impressed: each place is named and you can see as you travel the various points of interest without even need to approach them! Well done. 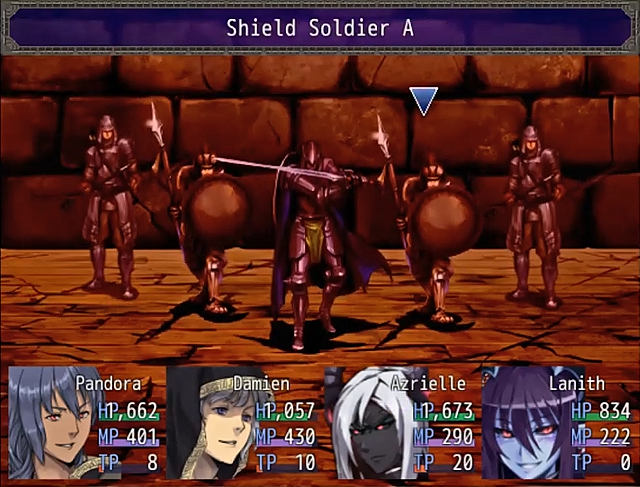 These loyal soldiers will fall down under the attacks of our dark minions!

Anyway how is the gameplay? Here we have the opposite of the usual Jrpg: recruit allies, get a stronghold, build an army of monsters, fight evil rival overlords and mighty heroes to get the power to conquer the world. This means still visiting dungeons and battling opponents, but here the game shines: battles against bosses are truly epic and requires learning how to exploit the various abilities of the party members, while combat against lesser enemies shows a lot of variety between the monsters and creatures that can be fought. On the other hand in some areas the encounter rating is so high it becomes a bit tedious, and some bosses aren't really interesting (just damage sponges) anyway for a game that's so long the average quality of the design of the combat encounters is high.

So we have a main mission but also lots of additional extra secondary mission that will unlock extra summonable party members, each with his/her stories, and additional scenes of backstory that will flash out the world and its characters, all optional but all good to me!

Aestetically the game is really good-looking: while I noticed some Trps being used there are lots of assets that I supposed where made specifically for the game and they blend perfectly to the rest (with the exception of one edited portrait, but uhm ok, nothing bad), adding variety to the usual sprites you may have already seen in other games. Mapping is ok, there are some suggestive scenarios and some maze-like dungeons that will be probably hated (underwater temple, for example) thanks also to the high encounter rate that I already mentioned before. I mean, these are ok, but clearly not the strong point of this game (I really loved the story and the graphic use of characters' full figures during battles). 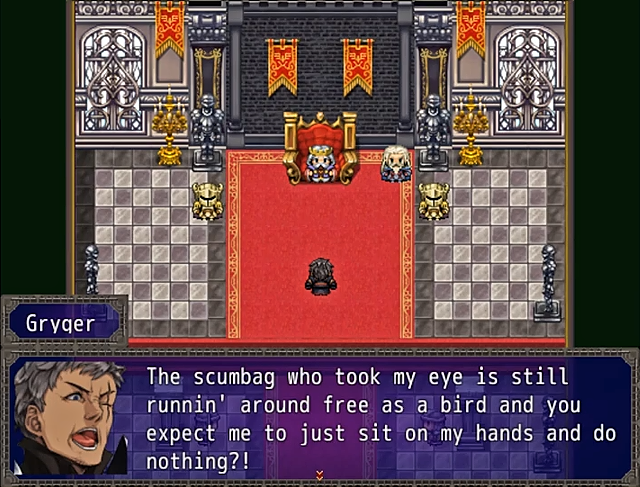 He surely has a point! I like how characters here have a reason to join the forces of darkness!

The Final Verdict
WheelmanZero did an impressive work here and the final result is a long, memorable game. Some few flaws (that include typos, some battles, mapping and design choices) refrain me for giving a perfect score, but clearly this is an extremely well written story and a greatly enjoyable adventure. Umbral Soul is an epic, stylish game with lots of content and unlockables, a very original story for a classic but enhanced gameplay that we always love. It's a 4.5/5 and it's impossible to give less.

Close
03/20/2022 04:38 AM
What?! Another review? My blood pressure can't take much more of this. Thanks a million for playing, and thanks two million for the review. Man, you're an absolute rm game playing machine. Nearly the entire first page of the review list consists of your work. You certainly live up to your name, ha! You might be glad to hear that I've been working to upgrade this game so those typos will soon be a thing of the past. Maybe then they'll finally stop haunting my nightmares. Thanks again for playing dude, and for providing feedback to so many devs here on rmn. You're a credit to the community.

author=WheelmanZero
What?! Another review? My blood pressure can't take much more of this. Thanks a million for playing, and thanks two million for the review. Man, you're an absolute rm game playing machine. Nearly the entire first page of the review list consists of your work. You certainly live up to your name, ha! You might be glad to hear that I've been working to upgrade this game so those typos will soon be a thing of the past. Maybe then they'll finally stop haunting my nightmares. Thanks again for playing dude, and for providing feedback to so many devs here on rmn. You're a credit to the community.

Hey! Thanks a lot. I must admit it took me soooo long before I made this review because it's years (years, really!) that people kept telling me how great was this game, but being a Rm2k and Rm2k3 fanboy I took my time... anyway they were right, of course!

Yes, I've played a lot of old games and I still play the newer ones, I've fun doing that. And I like doing what I find fun of course!
Well, since you talk about the typos, unfortunately I'm not a native english speaker myself, so I guess sometimes I write badly and/or cannot recognize the virtues or flaws of good and bad writing as much as those who have a better grasp of the language!
Pages: 1