"The Phantom Slime' is a cute cuddly game about a slime Phantom Mistress of sorts who was invited to a party, and tries to find said party without killing herself, or being killed, in the process. It was made by Kloe for the "Halloween Horror" game making event 2016. As such it was rushed to a finish, contains various rough edges and lacks finer plot points, but still contains some of the charm that can largely be attributed to Kloe's happy-going style that finds its way into the premise.
It does have an ending, three, in fact, but it is a short game and can be finished easily in 10 minutes.

You are a mighty slime being of decent intelligence, and with enough prestige to have your own airship, butler included. And you wish to have fun at a party. That's it.
The only problem is that everything is mean and everything is trying to trick you, and you don't even seem to notice. 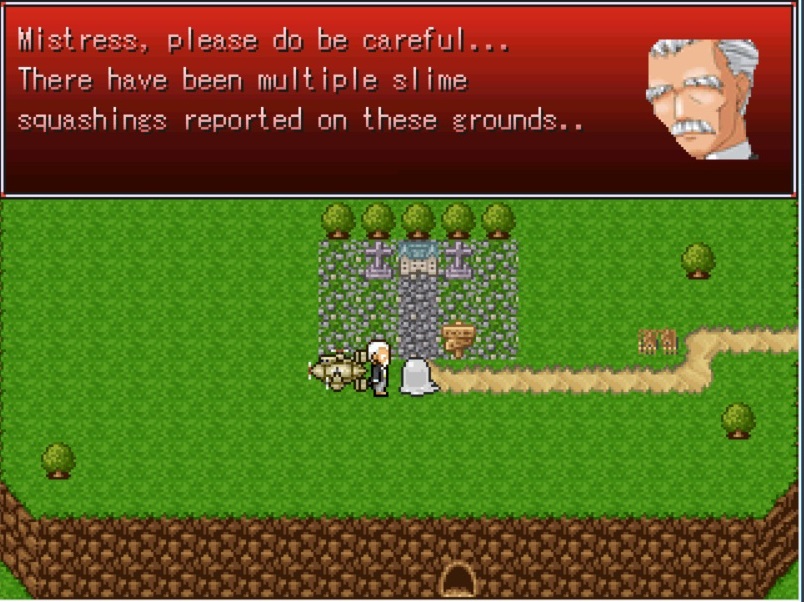 This should have been a sign right from the start...

It is reminiscent of Witch's House as everything is out to kill you, except that our slime is completely oblivious of the evil intent around her. Despite being threatened, almost killed and finding herself in an ominous not-at-all festive mansion, our slime remains steadfast.

However, any mystery around this is cut short by there being little plot or dialogue at all - we do not even know who invited us, or if we were invited at all, and I had to remember shortly before the main ending that we are in fact looking for a party!
Because dialogue is brushed aside, gameplay and puzzle segments stand alone as a series of hoops to jump through - some are easier and some are harder (looking at you, color switches!), but they are all very doable. The shadow library in particular was really fun because of both the flavor texts and the nice shadow/fog effect.
There are obvious baits - such as chests that are out of reach or contain nothing useful, interactions not giving you anything of value, and the only way forward is by accepting the bait even once you realize the house is not nice to you.
Still, I enjoyed some of the references and quirks - you can talk to the emptied out chest, for example, for some randomized lines. You just explore the empty place without any expectation of good or evil - it took me a while to realize that the threats the house threw at me were actually meant as they were! And not some random occurrence by the wayside. You just explore a place, and maybe remember you were promised cake.

What makes this really interesting is that as you progress so aimlessly, even though you have no clue what is going on or why, you start feeling very sorry for our protagonist as her enthusiasm is unlikely to be rewarded. Every corner raises her hopes, and every time that happens, you wish it would turn around, but you know it will not. Oh, it won't. Her enthusiasm is the only consistent element in this game, and in a way it is what pulls it together and could easily be expanded on. 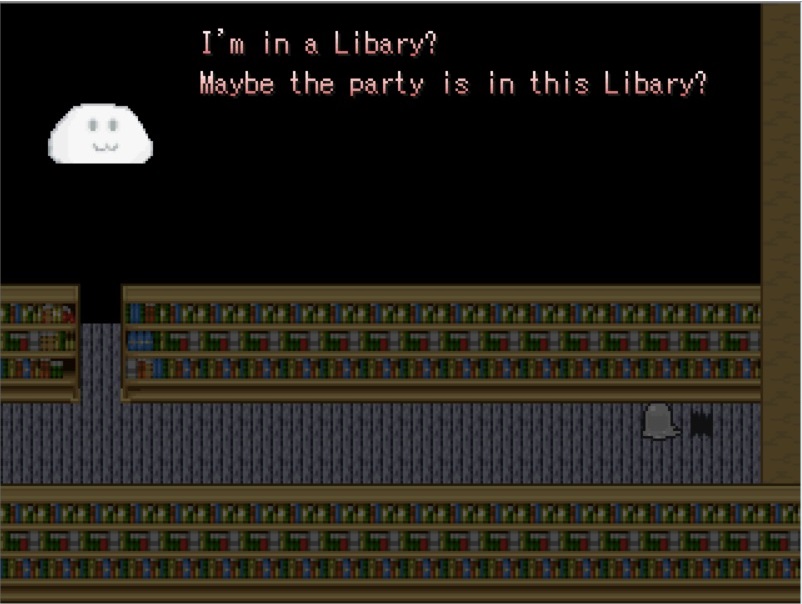 I am so sorry Miss Slime...

The game experience has some nice quirks, an amazing ending, but is not a coherent experience as you mostly go from one place to the next, wondering what could happen. More dialogue could make it more satisfying and more coherent, but it is a short game and the time constraints it was made under show (the ending came out of nowhere, for example). Nonetheless, it is a fun little game and I enjoyed my time with it.
I still wonder why our butler didn't accompany us though, if he was so worried. Isn't that good manners for a lady of higher standing? Oh well.

- Incoherent Story
- Tears for our protagonist