Looking Back at the First Version of this Project

First off, a huge thanks to everyone who's been checking out the page, subscribing and leaving comments! I'm so happy that people are excited about this game ^_^

As a mentioned in the summary, the first version of this game was started with RPG Maker 2000 back when I was a teenager. About a year or so after I started Chase for Divinity, I began developing this game.

Like many beginners, I had a problem with scope. I wanted the game to be absolutely huge! I had a big imagination, and I kept coming up with characters and dumping them into the world, and all their stories kept delaying the actual main story I wanted to tell.

I didn't understand how to make everything neatly tie into the main plot, so the plot would be put on the backburner while you went about solving another particular characters' problems. This ended up making the main plot feel disjointed and destroyed any sense of tension.

Working together with Sooz, we've taken the plot and cut out all the unnecessary fluff and extra characters that were padding out the game without contributing to the main plot.

With all that said, I thought I'd reminisce about the old, uncompleted version and share some screenshots. I'll leave them under a hide-tag here to save room. 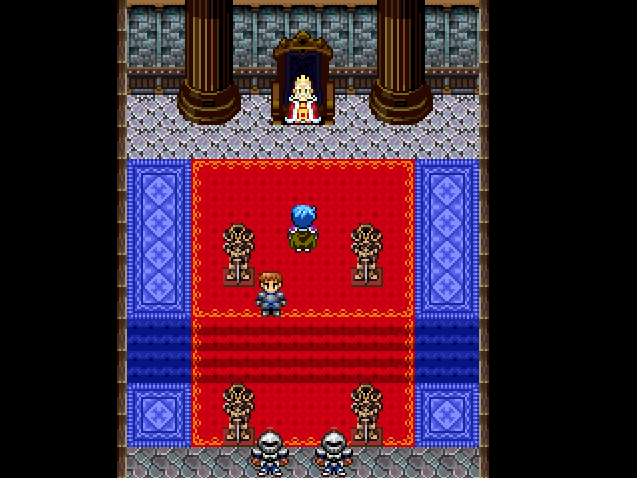 The game had an unnecessary prologue with a fake main character who died at the end of the prologue. At the time, I thought I was very clever, introducing someone you would assume to be the main character and killing him off after the tutorial dungeon, but unfortunately his death has very little meaning in the overall plot, so he won't be appearing in the new version. 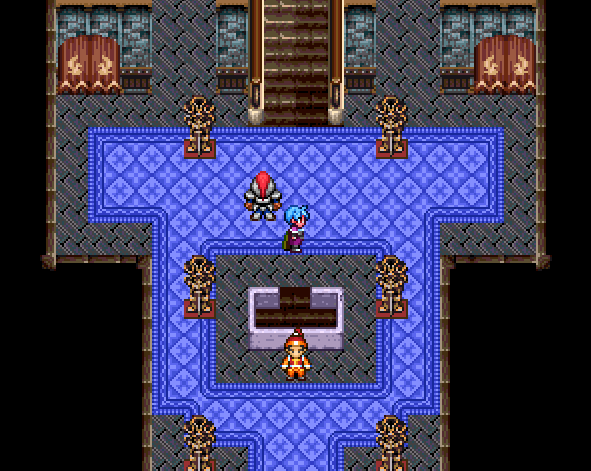 Dear unity of the past: That's not how rugs work! 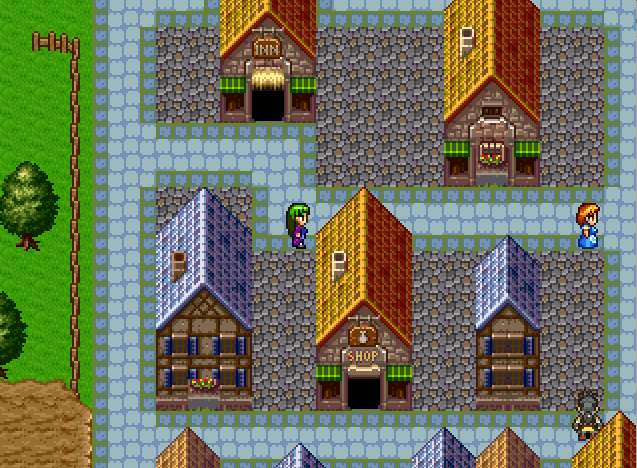 Ah, the old Breath of Fire 2 town tilesets. The first version of the game had rips, and lots of them! Back then, I took whatever I could find, and, if it worked, I used it.

Not to worry though. The new one will be 100% original tilesets ^_^ 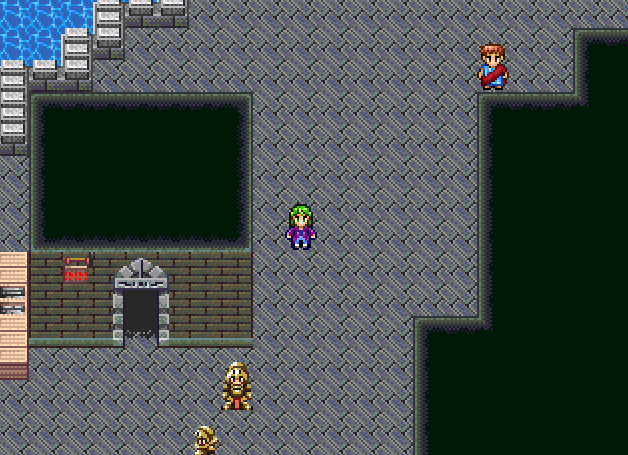 There were a lot of big, open spaces, making boring maps that felt amateurish and often took longer than needed to navigate. 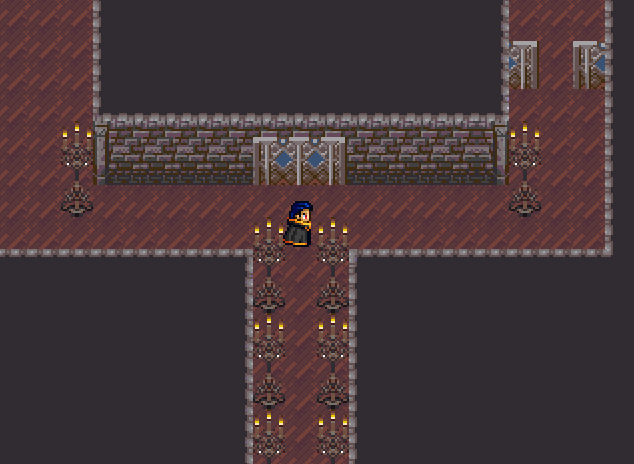 Dungeons were too long as well, taking on maze-like qualities that extended the run-time and had you fight too many of the same battles over and over as you tried to figure out which way to go. 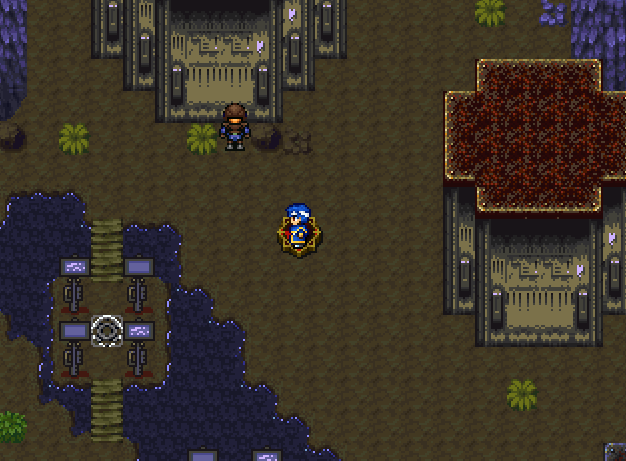 At one point, you have to take a detour into a futuristic alternate dimension that had almost zero to do with the main plot. I guess I threw it in because I had an idea for it, so why not? It doesn't really fit with the main story though so it won't be in the new version. 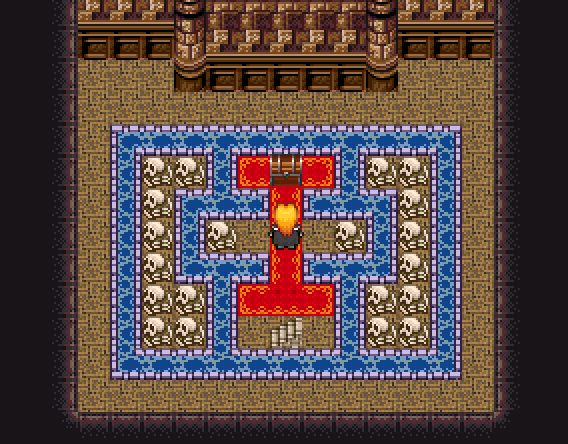 More rug failure and oh my that's a lot of skulls! XD 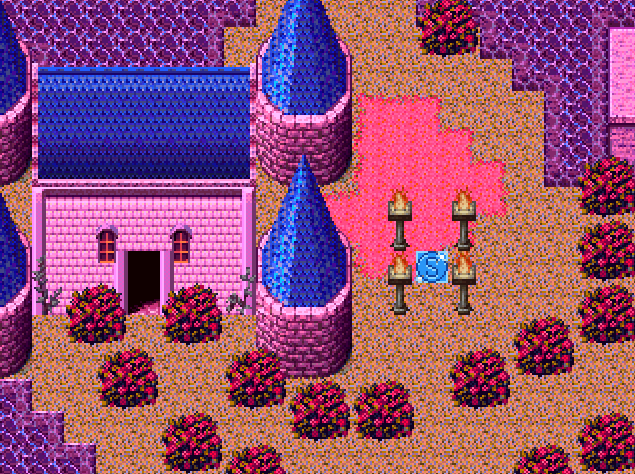 There were also heal/save points that were ripped from Final Fantasy 4 >.<;;; 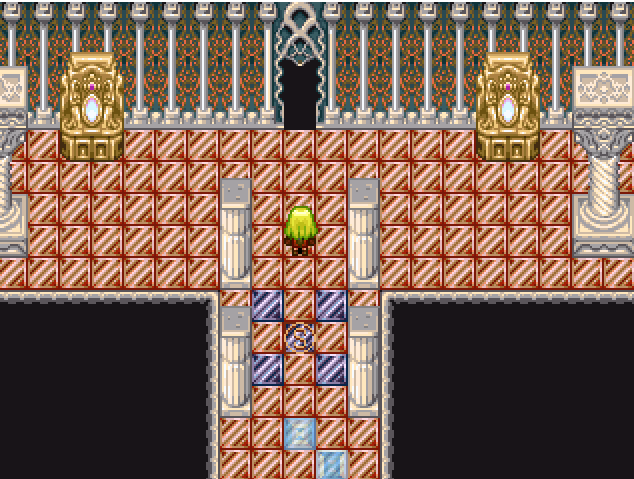 The Holy Empire's main tower was originally made with Terranigma rips (before I even knew what Terranimga was!) Go figure!


Well, that's enough for the RPG Maker 2000 Old Shame Hour. Next time, I'll be bringing you character bios with their concept art (drawn by Sooz) and their character sprites (drawn by Jo)!

Thanks and I hope to see you then! :DDDDD

Close
11/15/2016 08:35 PM
You think that's shameful? If I had my old PC I could show off true shame of inexperienced RPG Maker 2000 of my youth, haha. Those screenshots at least look like a game! All in all, super fun post. I love seeing stuff like this.
Marrend

Close
11/16/2016 12:45 PM
This almost makes me want to do a similar blog showing off screenshots of the TsuK version of Legacy for Legacy Reborn.
unity

author=zDS
You think that's shameful? If I had my old PC I could show off true shame of inexperienced RPG Maker 2000 of my youth, haha. Those screenshots at least look like a game! All in all, super fun post. I love seeing stuff like this.

Haha, thanks! :D Glad you enjoyed!

If I still had the first game I ever tried to make back in RPG Maker 95, then I could show off some real shame, but unfortunately that one is lost to time.

author=Marrend
This almost makes me want to do a similar blog showing off screenshots of the TsuK version of Legacy for Legacy Reborn.