About as good as most modern RE games.

Rezident Evil: It Is Escape is one of those crappy joke games that tries to be funny and edgy, and may succeed depending on your sense of humor. It's RM2k3, features pretty standard exploration and combat, but everything else about it is just...bizarre.

What really weirds me out about this game is that there's actually a pretty substantial amount of effort put into it. Like, they cared enough to make the game work and include a lot for the player to do, but the game is still ultimately a joke. The elaborateness contrasts so much with the subject matter, I just can't help but wonder why they wouldn't apply this effort to something more worthwhile. They at least have the know-how to make a decent game, so...why this? Why?

This game's visuals are all over the place. They're easily its worst aspect, but the ugliness and clashing are surely intentional. The game uses many pictures of real world people and objects, and everything is pixelated and gnarly. Lots of images have purple outlines where transparency issues occurred. There's almost no consistency. Most NPCs are in 2k3's cutesy RTP style, but plenty of them are random garbage as well. It's a legitimate eyesore.

You might expect a game like this to just use the same tired RTP sound effects for everything, but they actually kept it to a minimum (I can only remember hearing one). The sound effects are not default, and I don't know where they came from (I doubt they were made specifically for it). Some of the sound effects are quotes from celebrities or public figures. I guess they ripped whatever they needed, though I'm not sure "need" is the word to describe it.

The music is also non-RTP. I only recognized a couple tracks, but they've likely been pulled from all over creation just like the rest of the game's resources. To say anything stuck out would imply that anything in this hodgepodge fit together in the first place, so I'll say the tracks chosen work for the places they're used.

So...I guess this game is a sequel. In the introduction, it describes how Jill Valentine and Tom (still don't know who this is) took on Umbrella the first time and stopped their T-Virus dinosaur, the TV-Rex. We join them in their escape from the incident, but their subway train crashes, and here we are.

It starts out pretty "normal." You fight zombies, explore the city, and are tasked with stopping Umbrella by finding keys to each of their thematically-different facilities, conveniently placed in the four main compass directions. Beyond that, things get weird. Weirder than I can reasonably describe.

Dialogue doesn't even try to be coherent. Misspellings are rampant, characterization is bare-bones, and...I don't even know why I'm taking this seriously. The events of the storyline are so wacky and nonsensical that there's no reason to consider them beyond face value. Like the Russian occupation of Umbrella's HQ, Jill's dog murder backstory, or why Umbrella has a pyramid full of gold. Beyond the original objective, it gets even weirder and stops making any sense at all. I felt it was okay when the game was barely stitched together by some overarching premise, but it lost me completely when the seams all burst at once.

Things get oddly political toward the end. There were some parts that had the same tone earlier, but they were optional side areas. If there's a message in this game, I don't know what it is, if it has any merit, or if it's worth trying to decipher. I'll write it off as more nonsense and continue onward.

As I mentioned earlier, this game has a surprising amount of effort put into it. The game design is actually pretty tight. It's 2k3 exploration and combat, but there are lots of little minigames and systems that they added in. Let's take it bit by bit.

The game uses overworld exploration with touch encounters. When an enemy is killed, it stays dead for good, so it's impossible to grind. However, it's also (almost) pointless to grind because you don't gain experience or level up. Instead, enemies drop teeth and eyes that you can trade in at The Church of Danson for new skills, healing items, and permanent upgrades to HP and MP. On death, the encounters turn into piles of money. Their worth is random, and there's a lot to spend it on, so the economy is a legit concern for most of the game (until you max your cash at the pyramid). It's worth it to kill the monsters for their money, and just to have the encounters out of the way. Rest rooms (yes, that's what they're really called) are never far off, and you can heal yourself up and save for free, so there's no excuse not to clean up encounters wherever you go.

The combat is generally quick. There's a bare minimum of strategy involved, but it's significant enough that you can't ignore it. You see, enemies often have specific traits that are visible on their battle sprites. They can have additional offense, defense, speed, or any combination of those three. Offense is denoted by weapons like swords (don't ask me how a zombie uses a sword). Defense comes in the form of helmets/body armor. Speed is shown by sneakers, tires, or anything that looks fast. Jill has abilities that remove these benefits from the enemy, so you can neuter them to make the fight easier. The fast enemies are especially dangerous, as they slow your ATB and get more chances to attack. Take away their speed, and you can deal with the encounter more safely and swiftly. The ATB pauses while you're choosing an action, so there's no need to panic. The rest is just killing the enemies as quick as possible. There are other skills that can be helpful depending on the situation, but you shouldn't have trouble with much more than bosses. These are the kind of fights where you either win spectacularly or get crapped on, so it behooves you to choose your actions well.

Of special note is the Mercy of the Gods feature. Before most boss fights, and by chance on some encounters, a roulette will pop up before combat. It randomly assigns you three special skills that are extra powerful. They're all very weird and don't make a lot of sense, but don't question these boons from the heavens because they can really dish out damage. They vanish at the end of the fight.

It's in the area of minigames that this title stops being so kid-friendly, and I don't just mean that the content is inappropriate for children. There are minigames that are literally devoted to the exploitation and murder of kids. It's here that I need to say I think Tom Gums is the true villain of this game and that he's the one guy who should've met the business end of my Desert Eagle. 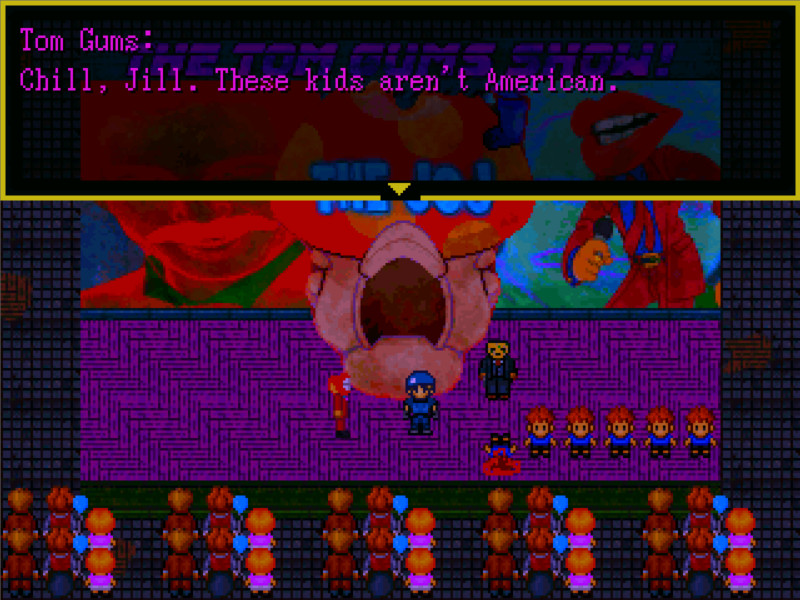 This shot is from a late-game quiz show where your answers have a two-thirds chance of getting the kids murdered because none of the correct responses make any sense. Don't ask me how I got there because last I checked, we'd blasted off to the moon before this event.

Earlier in the game, you can gamble on kids at Bone Garden. There's a button-mashing game where you choose a boy, decide whether to hype him up on cocaine or not, and then help him punch dogs to death. Winning the game yields no result that I'm aware of. You can also play Russian Roulette, betting on which kid gets the bullet. It's okay, though; the kids WANT to die. At least you earn something back if you guess right.

There's also a ghost-hunting minigame at the strip club, Glitter Heaven, where you play as Tom (not Tom Gums, just Tom) because Jill can't go there. You're given a radar you can set off with Shift to see if the ghost is haunting the room. Once you find her (they're all female), you have to place candles to prevent her escape, lay out some bait, and give warding plates to the guests so they don't die from the flash of your ghost-gettin' camera. Successfully catching a ghost puts her back into Tom Gums' ghost prostitution circle. Don't ask me how ghost sex works. Apparently, they can still get pregnant. Also, their sprites look awfully young. This quest yields no rewards either, so failing to catch the ghosts might actually be the better result.

Getting back to main game mechanics, it does feature the occasional QTE. These are a joke like everything else, so you'll be walking along when suddenly a splash image fills the screen, and you have to press a button to make it go away. The timer on them is set to one minute, so you'd only ever fail them on purpose. That's probably for the best. There's also an achievement system, several of which you get for doing inevitable things, like taking a step in any direction, or seeing a monster for the first time. There are doors marked with eyes throughout the game that let you access the achievement room. Here, you can get minor rewards for the accomplishments, and a pixelated woman in a bikini will say something mildly provocative to you (emphasis on "mildly"). I didn't get all the achievements; they don't tell you what they are until you unlock them. I got one in the ending sequence after I no longer had access to this room, so who knows what that would've been.

The game also features several custom menus and sequences. There are no traditional shops; they're all handled by pictures and events. They don't even use the same template across all of them. The technical side of this game is decently impressive, and continually baffled me as to why they bothered when THIS was the result.

If all that wasn't enough, it has its own manual included in a PDF (which is similarly tongue-in-cheek). The game really goes all out on its pretenses before abandoning any shred of sanity in its final chapters.

This game is an enormous load of nonsense. You might get a laugh from the goofy sound effects, pop culture references, political incorrectness, ridiculous animations/visuals, worse-than-bad writing, and the general absurdity of the whole thing...but in the end, a joke game is still a joke game, and I don't write joke reviews. I don't understand how it ever came to be, and I'm not sure I want to know, either. I might have been able to cut it some slack if it wasn't just so half-assed (three-quarters-assed?). 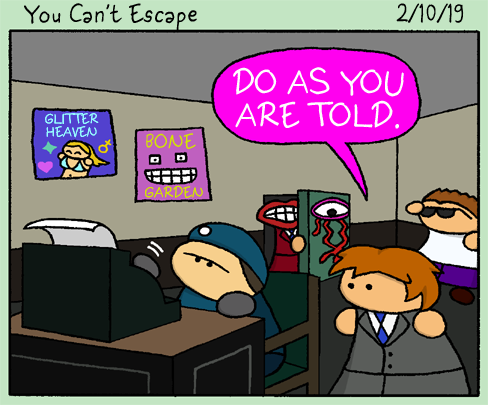 Never trust a pair of lips in a suit.

Close
02/13/2019 05:26 PM
It was certainly quite a trip. I can't say I truly understand, but your efforts definitely shined through.
twentyfour24