I created this video tutorial to help introduce the basics of parallax mapping. In it, I show my techniques on how to create visually pleasing maps in a relatively quick time frame.

To follow along with this tutorial, it is required that you do the following:

- Download and install GIMP, a free image editing program. You can of course use Photoshop, but for the video tutorial I'll be using GIMP.

- Download and install Hanzo Kimura's Ultimate Overlay Mapping script for VX. If you're an ACE user, you can use Darcangel's Ultimate Parallax script for RPG Maker ACE instead. They're basically both the same script.

Thanks for watching! Let me know if you have any questions or comments!

I'm considering using Parallax Mapping in my 4th game after
I complete my 3rd. I think it's the next step in becoming
a better programmer. I certainly will have a look at this soon.
RitoJS

Close
09/21/2013 04:27 AM
Sorry but this has become too much of a hassle to get running. It cannot run because it's missing files that have not been packed up with this.

It started with needing the RGSS202E.dll now that I have that, it's now asking for RPGVX RTP.

So this upload needs to be removed and this entire program or whatever this is needs to be packed up with every file it needs to run because right now it cannot run because it's missing the files needed to run it.

Also the Darcangel's Ultimate Parallax script for RPG Maker VX ACE. Has no instructions with it.

Should remove both of these and fix them by packing up all the missing files needed to run the the Demo. The second link needs a massive amount of instructions because it doesn't explain anything you need to know about where that script gets placed or how...an example of where that script goes or at least how to add it to whatever..or what are you even supposed to be doing with it..

How do you take that script and get the result it is supposed to be giving you in RPG MAKER.

This is why things like this are too complex to learn. I know for me that if the instructions aren't with whatever the thing is, then it's too complex because people have this vicious habit of trying to turn the internet into college courses and complain people shouldn't be having information spoon fed to them but that's the exact opposite.

The internet is not school and this we aren't paying to learn if instructions are not included then the uploader needs to make sure they are with whatever it is. I refuse to look up anything like this because it's supposed to already be with it..It's already bad enough there is a lot of work to do in learning the RPG maker, we don't need clowns post instructions on some random site where it doesn't belong then calling the person who asks for instructions lazy. I am sure as hell not going to chase down instructions that are supposed to be with whatever is uploaded.
krazie22

I had trouble, but eventually got it all down.

And Isn't RTP required to use RPG Maker?
blueperiod

Close
09/22/2013 12:18 AM
I'm sorry you had so much trouble with the tutorial, tx300. When I made it I intended it more for people who had at least a passing knowledge of how RPG Maker worked, not for folks who hadn't even downloaded the program yet or opened up the editor.

Close
09/25/2013 11:31 PM
OK now lets get a few things straight here, now I'm not trying to be a jerk when i say this but there is no real way to say this gently. The following situation causes more problems on any forum on the net because people cannot seem to get certain concepts that they don't think are their responsibility. So again the following situation is very annoying and I'm seriously sick and tired of running into this on every forum I go to when it comes to things like this so after having to be put through the following situation over and over and over, you can see why i really don't have any tolerance for it anymore.

The first problem is this:
Parallax mapping is not explained. There is no place on the net that actually explains what it is and the point to it. So telling people to look it up is pointless. The first thing people need to do is explain what it is.

The next problem is people always derail topics like this and take the time to type out everything else instead of actually getting things explained.
All people do is try to justify themselves into thinking why they don't need to explain anything and then tell others they're lazy or whatever and instead of getting things solved, people do everything but that and people don't even see how that's a problem and what's more of a problem than anything is that people piss people off hat ask how to do something, then actually have the audacity to tell the person they pissed off that if they weren't hostile or if they had a better attitude. But the fact is the attitude isn't there until people responding start up with their rap and pissing the person off INTO having an attitude. So instead of answering someone they instead do nothing but post stupid antagonistic comments, then act totally shocked when the person they pissed off gets rude with them

So lets try this now, how about instead of arguing with me and using the same old stupid ass excuse everyone uses saying WELL LOOK IT UP OR LEARN THE WAY EVERYONE DOES how about actually giving me the spoon fed information that is supposed to be here with this so I don't have to ask for the information.

And to clear something up, I refuse to look something up and do other people's work for them. I'm not the one being lazy, the people saying here is a tutorial then not posting any actual information and then telling someone else to look up what they didn't include.

I have watched this entire video along with a lot of others and I know the same exact about parallax mapping now, as I did when i first started which is nothing. So again don't tell people here is a tutorial then tell them to go look it up and have people leave this tutorial and go look up what this tutorial is supposed to be explaining.

Now again there is no real polite way to say this but The term tutorial MAKES YOU OBLIGATED to explain it, that and the fact it's your project you're saying you are going to explain and if people cannot do that, then don't go waving a flash saying HEY ATTENTION HERE IS A TUTORIAL.

I'm honestly really sick and tired of having people on the net, not only try turning things like this into college courses, then use the excuse of we do this free and we are not obligated to explain anything.

So come on guys can people PLEASE for once just post the information they're claiming to show in things like this.
kory_toombs

I have never used parallax mapping, but
to my knowledge this is what it is:

There are two type of mapping.
The mapping that's default in the rpg program (auto tiles)
and there's parallax mapping (which is done with Photoshop
or Gimp.)

Parallax mapping allows for more customization than the
auto tiles, but requires a great deal of skill and knowledge.
A person with zero background experience in rpg maker
should not attempt to use it. Also an average person with an average
skill level could likely produce the same detail with auto tiles
as parallax mapping.
TheNecromancer

If you're reading this, let me know via PM (through here or youtube) and maybe I can help solve whatever issue you're having with the tutorial.
krazie22

Close
10/21/2013 01:17 AM
I made a comment on youtube, but I thought it would be more helpful to use some screenshots to illustrate the problems. (The passiblitiy tiles moving while the character walks around the map.) 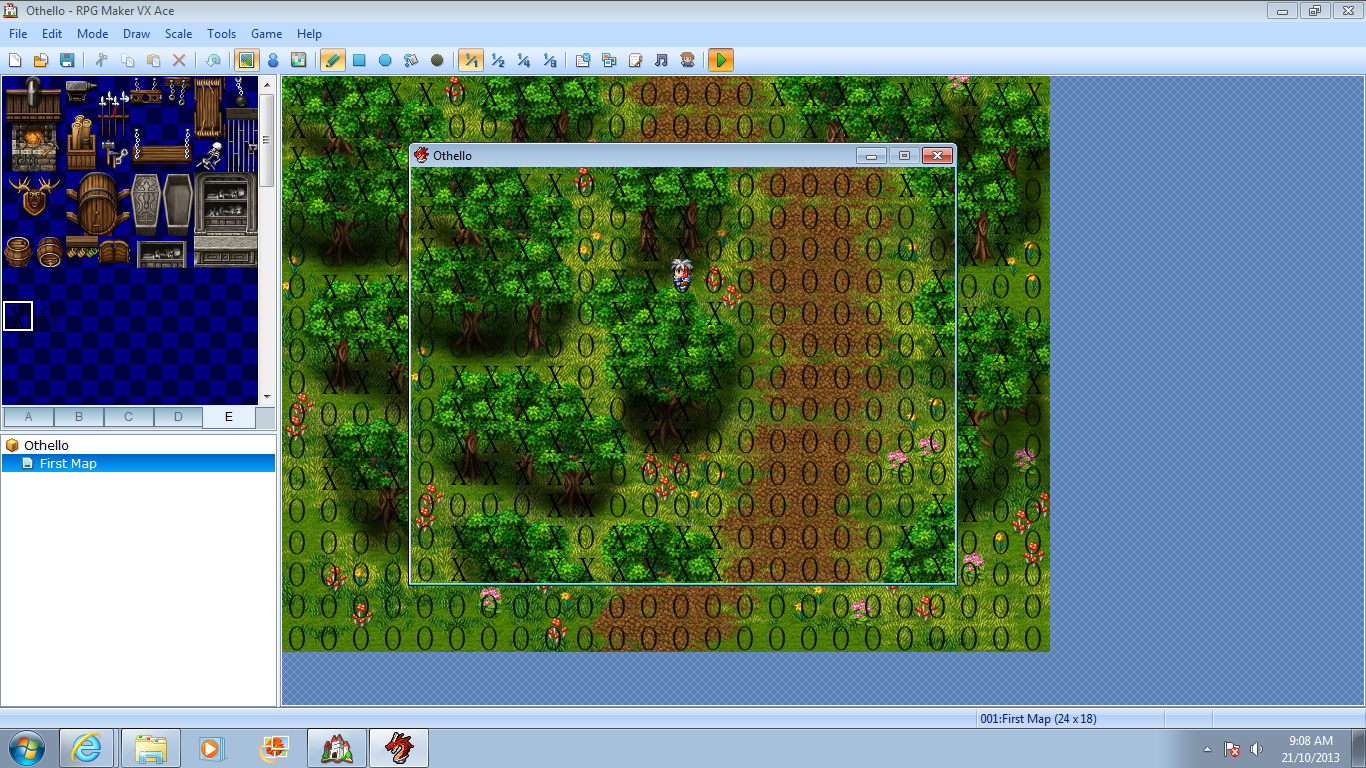 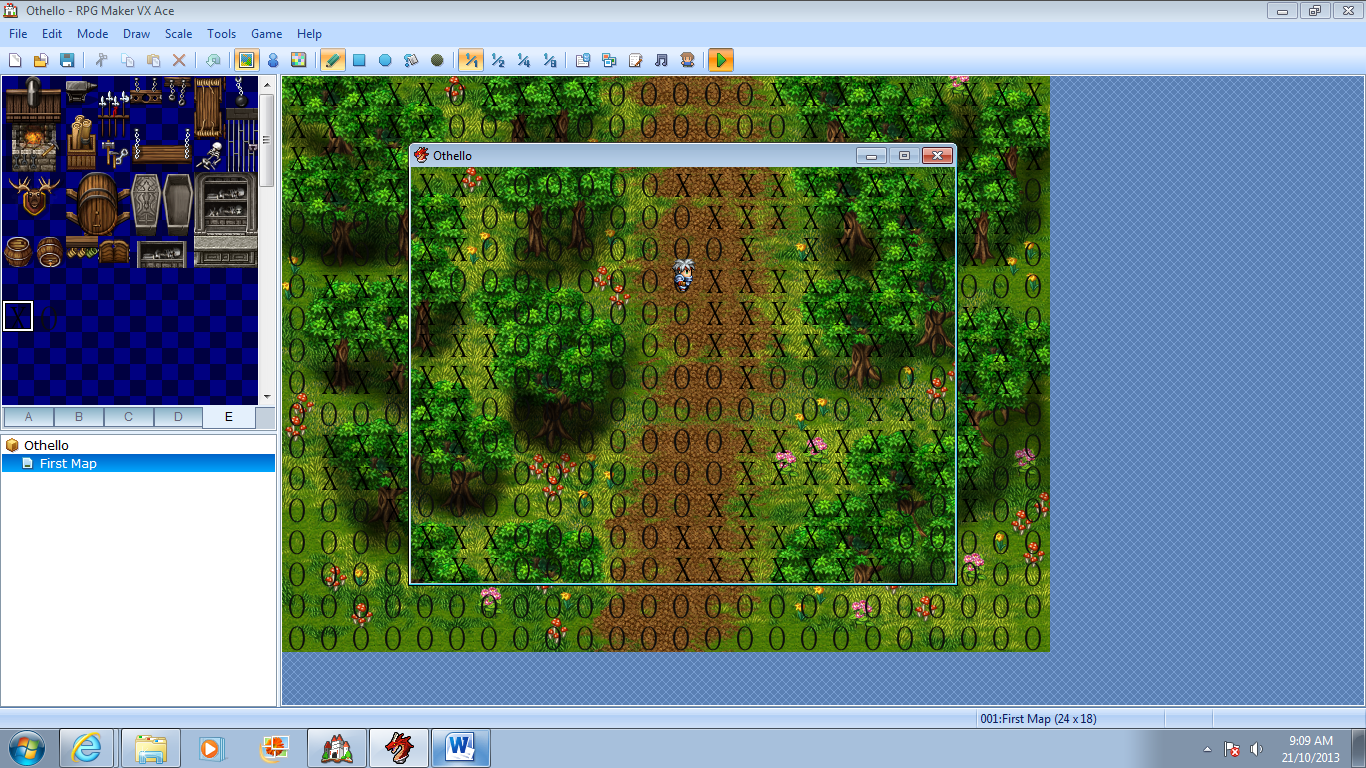 For some reason one of the tiles isn't showing up, even double checked the map editer to make sure it was supposed to be there 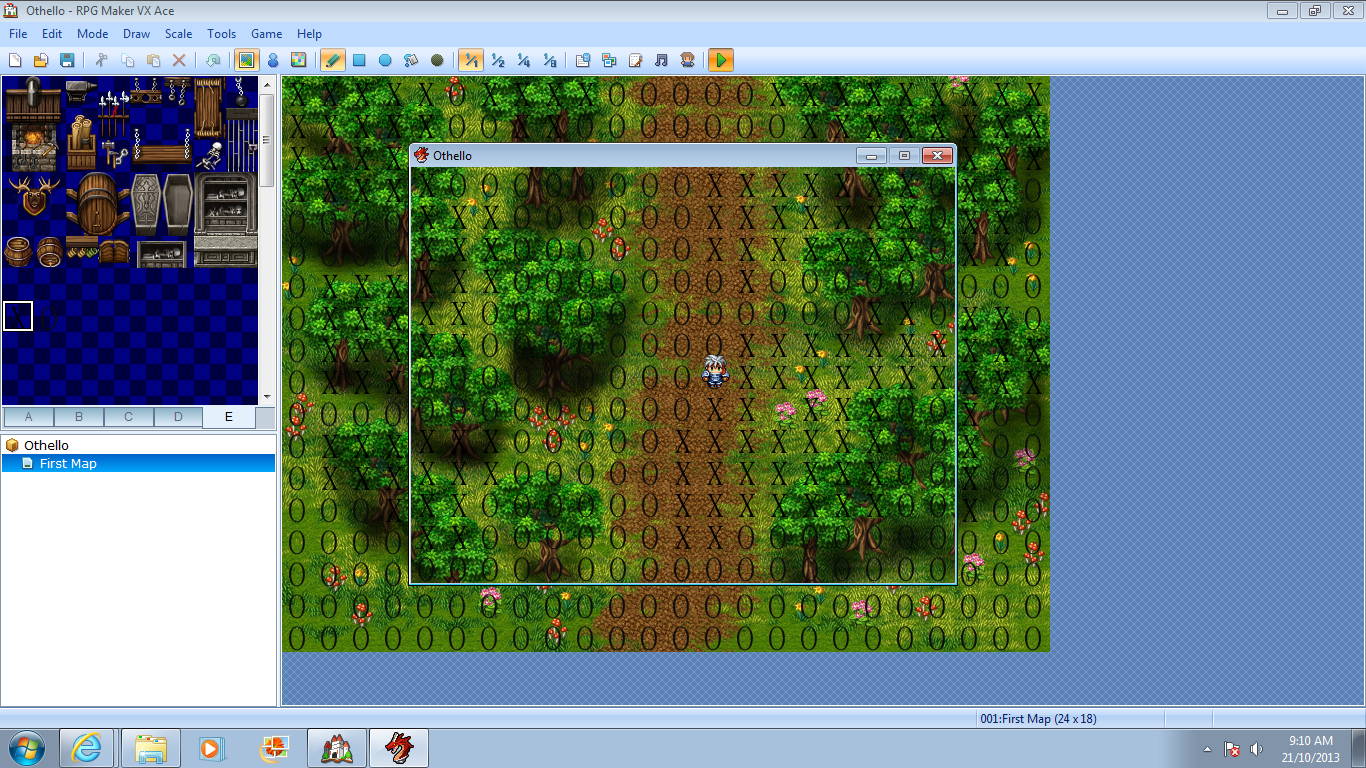 The character also has difficulty running around the map when I press the shift key.

This is for RPG Maker VX Ace using Yami's script. (Even though I don't think it does anything to use it.)


PS - I could probably even put this game in my locker if you want. This is the only map in it. I just made a new game to test out your tutorial.
blueperiod

I called it Othello.

Thanks for the help. I see a lot of potential for parallax mapping,
but I have obviously done something seriously wrong.

Edit: Have now noticed an additional problem.
When I walk around the map, parts of the parallax
are cut off. I had a look at all my Gimp file and the
size seems to be correct. Don't know if this help you any.

Edit #2:
I think Yami's script isn't right for this.
I found another script that may or may not work.
Trying to figure it out.
http://rmrk.net/index.php/topic,44837.0.html
kory_toombs

Close
10/23/2013 12:50 PM
That script works for fixing the position perfectly.
Now I only need to figure out how to set the trees above my
character priority.

I would recommend changing your link to Yami's script,
which seems to focus more on lighting, etc...

Edit: I just noticed that you have different links
on your YouTube channel and on here for VX Ace.
Pages: 1