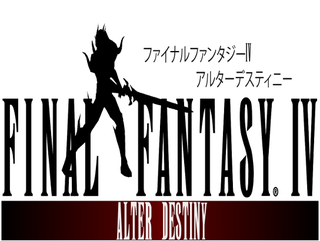 A re-imagining of an alternative plot to the original story of Final Fantasy IV.

09/23/2017 02:56 PM
I've gotta be honest here, I could barely read this 'review' because of how many spelling and grammatical errors there are. I'm not a grammar nazi by any means, shape or form, but honestly "develophers","charachers", "enought", "sould", "talck", "mysthery", and "anonimous"? Those are just from the first paragraph.

Then this, "The dialogues are boring and after few time I thought that would be a good idea skip them. Also charachers are not enought characterized and this sould be an important element in a game where you talck so much." As has been pointed out, how can you say the characters do not retain enough characterization if you are skipping the dialogue in a visual novel?

I realize I'm no one on here, but I just couldn't remain silent on this. The fact that this review was allowed is a detriment to reviewing standards on this site. I'm not saying every review has to be like an Addit (whose reviews are awesome in my opinion), but how can a review like this meet the minimum standard for just being cohesive enough to be understood and read by the general public?

author=Addit
And I didn’t know that you reviewed any games on here, Sphere! Does this mean that you’re gonna be reviewing more games in the future???

That was my first review. =) I'd love to review more games, and I've downloaded quite a few RM games recently (notably Chronicles of Tsufanabra, Epic Odyssey, Everlong, and Passage of the Hollow Moon), but I guess it just depends on time and me beating them. I'm also actively working on my Xenogears fangame so that's a factor as well.

author=WCouillard
I've got pretty much every rip there is for all of the PSP/Mobile FF game releases, if you need them. I'd have to put together an archive and organize it a bit first.

Dude I love you. =D I need FF Tactics for Mobile, FF 4 PSP and/or if you have the japanese mobile version that has the different sprites from the GBA or PSP versions.

07/25/2016 04:28 PM
First of all, thank you for reviewing the game Addit! Your critiques are definitely noted, some of them couldn't be helped either due to my lack of Ruby scripting knowledge or a clash of scripts I had to make work together, but I'll definitely take your critiques with me as I head into my next game. This one was a great way to learn the ropes of game development. Your feedback is most appreciated!

As a note for you or others, the best revive spell is Arise, which is learned very late in the game but it is there. As for the lag, that bothered me to no end and I tried every anti-lag script I could but either they clashed with the game and caused a gamebreaking glitch or they simply didn't work. I guess FF4AD is the behemoth that couldn't be slayed by anti-lag scripts. lawl Know that I did try to alleviate that.

I found your review to be really thorough and great source of feedback, thanks Addit. I'm glad you enjoyed the game overall. =D My next game is going to feature an alternate path for FF Tactics more than likely, so we'll see how that goes.

Admittedly, I did not get too far into playing this project before being completely turned off by it, stopping just after reaching Damcyan (I am a little more judgmental of FF fan projects than other projects, I confess), but I was extremely bothered by the following:


On a positive note, the changes to the game's plot didn't bother me, and the effort put into cloning FF4's battle events and the game's original cutscenes was admirable. It's a shame the same passion wasn't shown in some other areas of the game in favor of a shorter development period.

I would score it at a moderate 3 out of 5, based only on my impressions of the first few hours. Do not take this as a full review of the entire project. If and when I go back to it and finish playing it, I would submit a lengthier official review.

Your criticisms are definitely taken into account, but let me just say I'll never claim to be much of a great mapper. I literally had the OG SNES maps in front of me, and just applied the tiles as best as I could. I really wasn't being lazy, it's just a lack of experience with mapping. I can't even tell you how long I spent on doing the town maps to get them as 'right' as I possibly could with the skillset I had then. Definitely learned a lot on how to do more proper mapping, and how to correctly place tiles. I can only learn to do better.

In hindsight I probably should've used the sprite rips from the PSP version (I couldn't find complete rips of the PSP overworld sprites anywhere for the characters or NPCs), but I did want to have a more unique look to the game so I used Sithjester's renditions of the characters (which are formatted for XP so I had to do some reformatting and re-animating). I know it wasn't the best choice, but if I went the SNES/GBA route in terms of graphics, it'd look just like a romhack and I didn't want that. I'm definitely using rips for the next game though (at least from Record Keeper).

I just want both of you to know that I sincerely appreciate the feedback and the critiques. I'll be aiming for 5 stars with the next game. =D Thanks again!

Edit* I just had to mention that the 'special effect' going to and from the moon is definitely hilariously bad. I made it and was like, "... yeah this is pretty terribad." lawl
Pages: 1