Close
08/02/2018 10:19 PM
Set the Wait checkbox to any flash events, battle animations, or shake events. Otherwise it runs the events all at once and gets rid of overlap.

Also, it only shakes once for each time, unless you Begin Shaking. If it still runs too fast to notice, consider adding Wait, like this.

Doing this adds a gap between shaking. And you can lengthen the gap.
Boulon

Close
08/06/2018 02:30 PM
I think there is a misunderstanding.
There's no such parameters in the battle animation settings.
What you are refering to is a battle group event or something event related. I am talking about the battle animation editor which has no "wait" and no options for shake duration.

Here's what I'm talking about.

(scroll the image to see the right part)
TheNecromancer

I tested mine, which is very unofficial and modded, but I couldn't get anything to shake at all with any option with only a battle animation as you showed in your screenshot. So I can't give any fix. Can you explain what this battle animation will be used for, how it will be triggered, and what you are doing to test it?

Have you tried changing it from screen shake to enemy. Just to see if that changes anything? Did you try changing any other options, like Cibler on the first screen?

What you can do instead - show that battle animation, set wait to OFF, and add your own waits/screen shake to play alongside this animation. Most places where you can trigger this battle animation you can also run code after it, which can be wait/shake screen to get the same end result.
LordBlueRouge

I know exactly what you're talking about. I have a few solutions to this.
Give me a moment and I'll edit this post with the answer and a couple of examples:

EDIT:The way ShakeScreen works in rpgmaker2003 battle animations:
either the target, or the screen will shake once, for 20-25 frames
(it just shakes once, it's very limiting, you don't have a whole lot of control over this unfortunately): 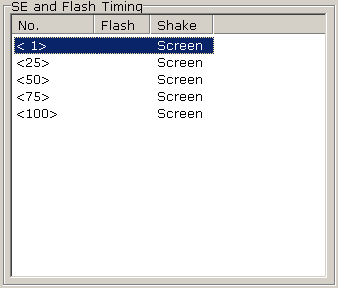 Now, if you try to play ShakeScreen more than once during those initial 20-25 frames,
the process will be interrupted and start all over again;
in rpgmaker2003, it will look as only one ShakeScreen command played, like you described in your post: 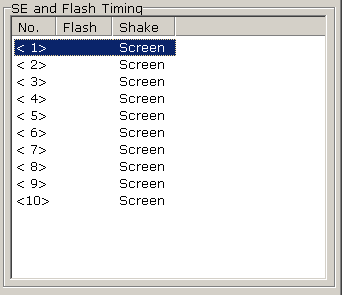 Now, a really neat workaround/glitch is to shake the screen and the target through alternating frames: 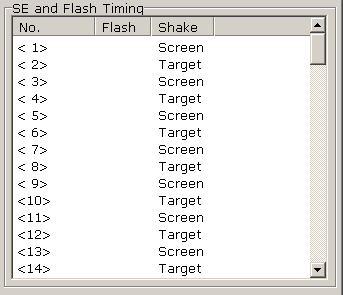 it's incredibly tedious, but it looks really cool once you're able to pull it off in rpgmaker2003: (you will have to plan it out, but once you know how many frames you want this effect to last for, you can create this effect very quickly)
(watch in 720@60fps, it's very subtle so it was very difficult to capture it correctly - I haven't experimented with this a whole lot but I'm assuming if you space out the frames you'll get a more intense or less shake etc) 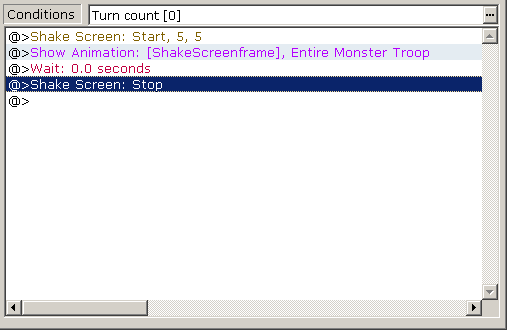 This is another workaround/glitch in rpgmaker2003, that will allow you to shake the screen for the duration of the animation. You'll have more control over the strength of the shakescreen command, but the problem with using this method is that it's ultimately reliant on being called upon by a battle condition in rpgmaker2003, so you'll have to figure how/when you want it to happen in battle - So this is more ideal for in-battle-cutscenes however.

Let us know if this helped. ❤
Kaempfer

Thanks guys for your support!
bulmabriefs144

Close
08/08/2018 06:57 PM
Yup yup, good to learn new things. Also, the human eye can't process all the frames, so whether doing method one or two, the key is to make a gap in the screen shaking. That way, even someone sleepy is like, "Hold up, the screen isn't constantly shaking."
LordBlueRouge

if you guys know of that thread Zachary_Braun mentioned, let me know and I'll gladly repost it there.
I recall seeing something like that on RMN or rpgmakerweb but I haven't been able to find it since.

...I hate plugging/self promoting, but if you guys really liked the examples I used here,
make sure to nominate Final Fantasy vs. Dog for the misaos.
The only reason why I'm mentioning it, in this case is because the second method,
I actually used near the end of the demo, for when Titan is summoned: 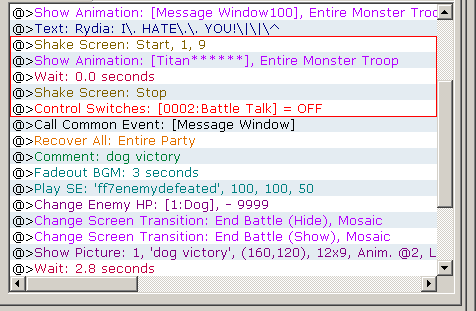 Like, on the surface the game may seem like really dumb jokes and memes thrown together,
but there's an understanding of rpgmaker2003 here, that's worth looking into.

Like, just to get an idea:
The one line battle message window, I learned from studying Leric's Cyberfactor.
The Jump mechanic I learned from looking at Final Fantasy: Time and Again and UPRC's Blackmoon Prophecy
and trying come up with to a better one.
Cecil's DarkWave, came about by studying this video and trying to correct it in order to understand why you can't do DarkWave in rpgmaker2003.

Like, I'll admit, FFvD is not the best game in the world, it's an incredible short demo - but there's a wealth of information there,
that I think a lot of people should be really looking into, in order to better understand how rpgmaker2003 essentially works.

Like, a lot of the stuff you're doing in rpgmaker2003, you're not actually creating a game, you're creating the appearance of one,
because rpgmaker2003 was really only meant to create very simple games with. But once you understand how this idea works:

i.e. You can't shake the screen more than once during rpgmaker2003 battle animations,
so how do you fool rpgmaker2003 or the player into thinking that it can?

...But yeah guys, I apologize,

@Boulon I'm glad I was able to help out. Keep us posted on further developments!
I'd love to see what that awesome tsunami battle animation will look like in action, once it's finished!
(Saga Frontier is like, my favourite thing! ❤ :>)
Zachary_Braun
0