I am working on new rooms.


I really like this. What's it made with?
Darken

author=Darken
what are you working on WIP


A game. Maybe it'll even be showable in the near future.
Corfaisus

Close
06/10/2016 10:10 PM
Rewrote my game description so that the really important parts of this game can be known before people even open it up (because the last thing I need is more people thinking "rtp dragongame"). Now it's on to doing my part in this anti-procrastination event by planning out the exterior of the Graveyard of Shadows.
Xenomic

Close
06/10/2016 10:29 PM
Still working on Frozen Fields. Got the entire sliding ice and ice blocks gimmicks finally worked out, so that they shouldn't bug out (hopefully). Will have to test those more to make sure the sliding ice works as it should. Also working on the enemies for this area, and debating on what enemies will be in its dimensional rift. So far I only have...Skull Eaters. I feel like this rift was supposed to have a bunch of Flans though, so I'll probably switch it to Flans instead. Why Gilgamesh is hanging out with a bunch of Flans is beyond me (yes, Gigglemesh is the boss of the rift. I'm still working on his skillset since...well, I want two phases to him, but I don't want him to have TOO many moves per phase. It's tricky). Also still debating if Ruins of Vina will be relegated to flashback land (and later optional dungeon land) or not. On one hand, it's probably going to wind up being another 1-2 hour dungeon, which there's already been 2 of those in this game, and pretty close to one another, but on the other hand, I feel bad for having Piano do all that mapping and not use it. It's a hard choice, and I'm not even sure what I'm going to do to fill in between the dungeon too (probably a cutscene with Order and co. since there hasn't been much development on them. Already had 2 scenarios with Rinnosuke/Yamame so they don't need more development, and Sanae isn't really THAT important, but Order...kinda is). Also still updating character skillsets and whatnot, because that's a thing that never ends. Oh, and HP+%/MP+% accessories I found out to be bugged, so I need to get around fixing that, either by changing it to flat values, outright removing them which I don't want to do, or actually figuring out a way to make the % boosts work in 2k3.

Also been working on a new game idea featuring the Touhou Fantasy girls (and an OC named Shyam, whom comes from two cancelled Fire Emblem hacks), as well as MAYBE a couple other additional characters to round it out a bit more. Been working on skillsets for them too, but it's hard, especially since I'm working off the Neptunia combat style for them (yes, the Neptunia series kinda inspired the idea of this game. Kinda tired of all the serious games I've played, seen, and been working on. Kinda just want to do a "fun" game, but A) Wanna finish TF first, B) I'm not very good with comedy/humor, although several people found my humor in TF to be good so maybe I'm not as bad at it as I thought?, and C) I don't know what the plot would be yet. I have the 8 playable characters in mind already, and I have an idea of the STYLE I want the game to be, but not how to go about doing so nor what the story will be or what. I may need people to help me brainstorm ideas for it and whatnot, if they're willing to do so. ^^;

Whew! Lengthy post! Guess I've been busy since I haven't been able to LP lately. ^^;;
AceOfAces

Close
06/14/2016 06:24 AM
Whew. Got this dungeon done bar treasures that I forgot about (oops!), and now thinking on what to do with next dungeon. Bombs + Grenades are such a nasty combination (Grenades can use Chain Reaction to make all Bombs/Grenades use Self-Destruct. I may need to lower priority on that so that it doesn't use it first turn like it did on me. Otherwise it's game over), Elementals and Flans are kinda jerks, and I didn't get to fight the Notorious Monster sadly. First boss is kinda nasty, but he just opted to sap my MP all the time, and last bosses aren't too tough when together, but my god when one is left alive it gets really brutal. ESPECIALLY if the player doesn't have the right equipment to resist elements/statuses that are used in that fight. I think this dungeon is fine otherwise! I may need to readjust the ice puzzle though because...it's too easy!

So while thinking on those (and how to fix up PC-98 Marisa still), time set up all these Flans, then figure out what I want to do with the Water Magic Stone and...GILGAMESH.

(Anyone have a better suggestion for PC-98 Marisa? The fight with her is really dull and boring, despite me trying to make it a thief battle. Marisa can steal abilities from PC-98 and vice-versa, and while they have those stolen, the other can't use them until they steal them back. But otherwise it's...kinda not that exciting...)
Ramshackin

Close
06/18/2016 05:14 AM
Spent the last two weeks lost in a side project trying to combine random rouge-like gameplay with tactical jrpg combat. It's great fun, but my poor main project is wasting away.
Rebezion

Here's a little alpha gameplay from the first area of Kingdoms of the Dump:

Featuring the work of our new map artist dm404

music is still in an early form and no real sound effects.
Rebezion

Close
06/19/2016 08:46 PM
Are you doing everything + music yourself Dookie ? art is nice and interesting and music sounds good too. Is that whole pure pixelart ? That had to be a ton of work !

Indeed, its not so confusing now. Contrast is important. I added some mushrooms to the forest, they werent there before.

You said the music is early and it's light on SFX, so if you're interested in working with other audio people, I'd be interested, for sure.

I'm definitely going to keep my out for this!
Rebezion

4 people is big team for me ! Well I assume you re all doing your parts in spare time, it goes together nicely.
Jude

author=Jude
I wrote the pitch-shifting in C, though. Basically I stretch the signal and do some fourier transforms to clean up some of the interference, then just resample it to the desired pitch. More or less.

Neat. Is this open source or do you have a code snippet or something? Haven't thought of procedural audio stuff before.

Sorry, I missed this. I haven't put any kind of license on it, but I don't see any issue with making it public domain. I'll upload the source when I get home, if I remember.
Xenomic

Close
06/24/2016 08:54 AM
I am currently working on redoing the prices of skill scrolls, because I feel they're not very well done. Especially as the game progresses, though figuring out a good price for them is the hard part. I have to take the power of the skill (or effects in some cases), any special abilities it may have, who uses it, etc. into consideration for the prices, and then from there have to gauge how much the next level will cost and so on and so forth. Not easy at all! If anyone wants to try to help with it, that'd be great. I also have new weapons to do Weapon Bless coding for (oh boy...), and will probably be doing something about the Weapon Bless system (that nobody probably uses...).

As for the game itself, it is currently about 50-70% done with beta5. Frozen Fields is done, and what's next is to cut out Ruins of Vina and replace it with a cutscene involving three characters and their interactions, and then a flashback afterwards about what happened at the Ruins and then go from there with the game normally. Still don't have Reimaden or Hokkai fully mapped either, so that's a problem. I still need to fix up the HP/MP+% accessories because they're broken and break characters...
Sgt M

Close
06/28/2016 10:46 PM
For what it's worth, nearly all of the graphics for my current project are finished, save for some spell animations, one or two battlebacks, and the finer details of one particular tileset.

With two thirds of the game fully programmed, next up is the big push to get the mapping and the rest of the eventing done for the last two areas. Beta is getting close...
Chilly-Pheese-Steak 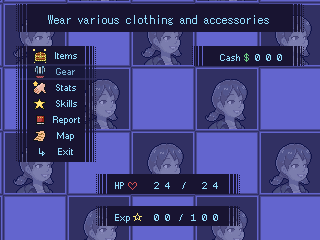 I've been working on menus. I never thought that making a menu in 2k3 would be harder than making a battle system.
Xenomic