Sacred Reviews: The Emperor of the Moon

"The Emperor of the Moon" is a relative short game developed by DeИ!eLLa, but an English translation of his game was uploaded by Goddiga whose uploaded a couple of other projects by this developer.

Story
Translation
"The Emperor of the Moon" was originally released in Japanese but was given an English translation by Nolfwin. Unfortunately Nolfwin's translation is rather rough in a few places. And while this doesn't get in the way of understanding what the game is generally going for. It does mean the game routinely breaks away from from standard English syntax. As a result you end up with the kinda of gems you see below.

Grammar
I suppose I'm sort of just asking for halibabica to come along and spank me on the finer details of English grammar by having a subsection dedicated to this topic, but I honestly feel compelled to point how much this translation fails at selecting the proper tense for various words.

Cons
On the downside the game clearly ends in a way that sets it up for a sequel. And while many would argue this isn't a negative in and of itself. I'd argue that sequel baiting with RPG Maker games usually doesn't go very well. One only has to look at games like "Monster Hunt" and "Tactics Blade" to come to the conclusion that most developers aren't prepared for the sort of time and energy sink a series of games will become.

Another issue as I already mentioned above is the translation itself. It tends to be rather rough and while the general meaning tends to get across. I'm afraid that a lot of subtle nuance has probably been lost.

Honestly, there's very little gameplay to be had in this game. In fact, you rarely have control of your character because the game would rather be throwing mountains of badly translated dialogue your way instead of letting you move about. In fact, the only major gameplay section revolves around fleeing from monsters that look like Pac-man while within the confines of a rather short maze.

On the graphical side of things the game is very well done with custom assets that genuinely look good. In fact, I'd argue the best aspect of the translated version of this game is the visuals.

On the plus side the music in this game is rather good. Unfortunately all of the good will I'd usually afford a game for this is drowned out by a series of sound effects that pop up every time a character speaks in this game. For some inexplicable reason the developer thought it was a good idea to include a series of obnoxiously loud teletypes that pop up when a character talks. And I say series considering the sound that pops up when Wenshan and Roushue speak is slightly different. In fact, this was so annoying that I actually quit out of the game in order to go into the settings and disable sound effects all together.

"The Emperor of the Moon" is a game whose English translation leaves a lot to be desired. So much so that I wish there was a better translation to be had. To further add to my pain is just how annoying it is to play this game if you don't disable the sound effects. On the other hand, the game is a visual treat and that alone might be enough for some people to play this short game. As it stands, I feel torn on whether I should recommend this game or tell people to give it a pass. As it stands, I suppose people will have to make their own decision based on my and pianotm's reviews. 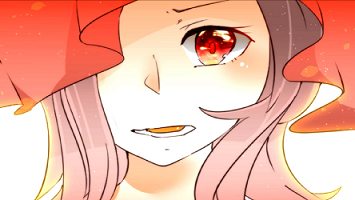