0 reviews
THIS IS ONLY A NON-PROFIT FANGAME. THE RESIDENT EVIL FRANCHISE BELONGS TO CAPCOM.

1.About
This is a short demo I've made years ago in RPG VX. I've never managed to continue working on it due to having been busy with real life, at least until now. Maybe I'll try to develop it as separate episodes or something. :)
I don't think I have what it takes to call myself an avid fan of RE (only played through 2 and 3), my aim is to capture the feel of the original series as much as possible while making this game, plus adding some "RPG" element to it such as skills.
To anyone who would like to give this a look, you have my sincerest thank, and any feedback is greatly appreciated.
Ps: English is not my native language, so please pardon me for any grammar error. :)

2.Story
I haven't planned an actual plot yet, however the game will be set in Japan instead of America like the original series.
The (draft) story:

A mysterious epidemic occurred in the town of Nerima-cho. The infected people turn into horrifying cannibalistic monsters. The police and the military failed to contain the chaos. To prevent further spread of the epidemic, the town was quarantined by the Japanese Ground Self-Defense Forces, who have denied power, communications, and food to those trapped within. The chaotic, lawless situation and scarce resources force the survivors to turn on each other.

There's a rumor that the Japanese government is planning to eradicate the town and all of its population with nukes in the next few days...

One of the survivors (our hero) tried to make it to the local police station as a last hope to call help from the outside world, only to find the place already overrun with hordes of undead.

Will you survive long enough to see tomorrow? Will the cause of the epidemic ever be uncovered?

3.Main character:
Ouga Kenji aka "The Blondie": A first year high school student. Supposed to be the Japanese counterpart of Leon S. Kenneddy (though not quite, since I've designed him to be more like an anime-cliché character ). Half Japanese, half American, plus his blonde hair made life difficult for him at school. A bit cocky and unstable. 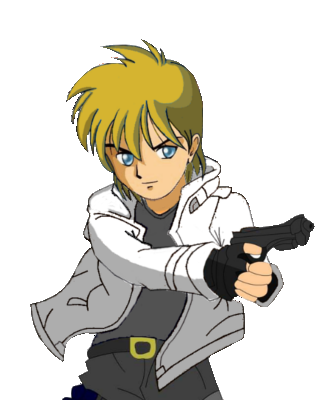 4.Features:
-Real-time Action Battle System with diagonal movement.
-Limited inventory and storage box just like the classic RE.
-Varied monsters with different movesets and somewhat complex AI (only the zombies, the zombie dogs and the lickers are featured in the demo as of now).
-Skills which cost tactical points (TP) to use, new skills can be learned as you progress through the game.
-Retro graphic.
-Cheesy dialogue (English isn't my native language, so yeah :)) with some black humor.
-Explicit scenes of violence and gore.
-Foul language.

5.Controls
-Move your character by the arrow keys.
-Z: Interact/Select.
-X: Open menu/Cancel.
-Hold Shift to aim, then press Z to attack or A to reload your weapon.
-When aiming, press D to quickly turn around.
-Hold S to walk slowly (some monster can hear noise, the Lickers for example)

*Note:
- I recommend using 7zip to extract the game.
- This game does not require RTP.

THANK YOU FOR READING!
My email: triduong4396@gmail.com

Sorry for the long silence, I was too busy with the real life that the progress I've made this year wasn't much to talk about. Even though this game couldn't get the recognition I expected but my enthusiasm still keeps me going somehow.
I'll try to finish the first episode as soon as I can.
A huge thanks to the few people who have followed and supported me through this project.
P/s: Some CGs I've made myself (Yeah, I know, my drawing sucks :))