I already played Dragon Lancer and Othello, other games made by this developer, and this game continues that 'flavor'.

What do I mean by that? Well my guess is that english isn't the developer's most proficient language. Unlike most other games though, instead of poor grammar obfuscating the meaning behind the writing, we have passable grammar, but all of it is delivered in a serious, deadpan monotone. Every single character except perhaps one little girl all talk in more or less the same manner, including climactic moments and romantic exchanges. Imagine that. Events happen in strange ways that are difficult to anticipate, and also tend to be incredibly ludicrous. At least that's what I felt when they happened. 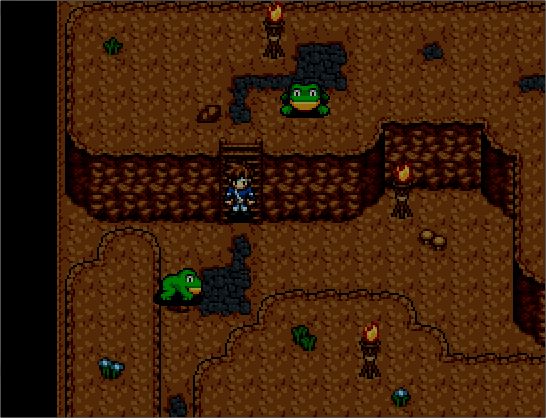 The first room in the first dungeon. This image sets the tone for the entire game.

No idea if this game is intentionally funny or not. Anyway, the plot itself is pretty standard. You are on a quest for revenge against the empire, and along the way you find out that it was evil all along. Very much similar to your typical final fantasy plot. There's a moderate amount of back-and-forth-tracking; the game does sometimes teleport you to the relevant location, but not always. Not a big problem though, there's no random encounters and enemies are easy to avoid (and far easier than bosses, if you do run into them.) Speaking of which... 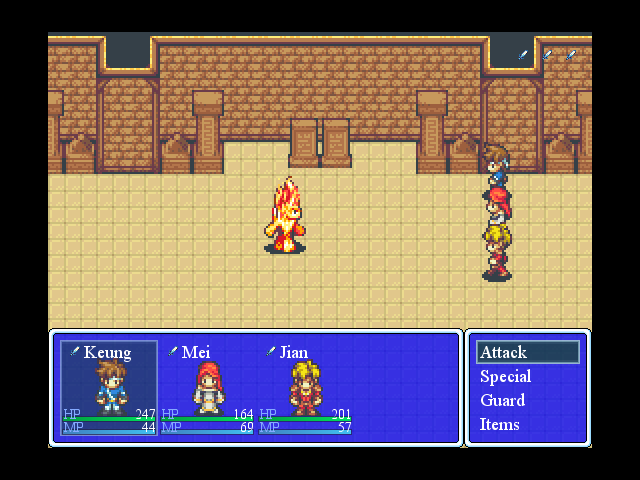 This is the first boss. I died to him the first time when I decided that Mei could take him on at Level 1.

That's right, bosses are pretty tough. It's basically mandatory to grind Mei up till she learns Ice, otherwise the boss #1 will reck u since he gets 3 turns. You also have to play very defensively and methodically, revives are 350G apiece and you don't really have much options when a party member goes down. Guard will be your best skill in this game, no joke.

The towns all look pretty good. This tileset is very colorful and vibrant, reminding me alot of secret of mana which just came out on steam by the way. Anyway NPC's have very little to say and you won't get much use out of most of them. Only the inns and shops have much use for social interaction. 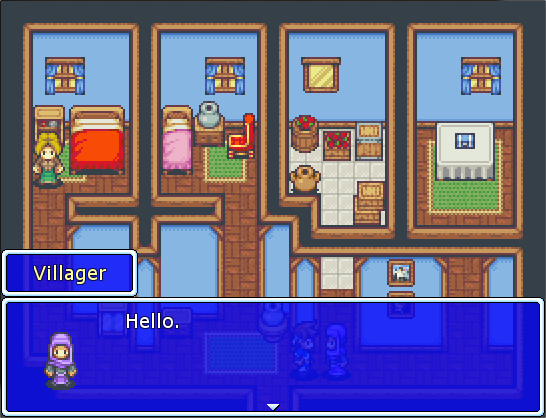 That's all he says.

Although... there's one major thing that every town has going, and it's children's card games. The triple triad thing is raging in every town, just like in FF8. I always had a good feeling about this script when I saw it in another game, and I like it here. Take a look at this riveting card game: 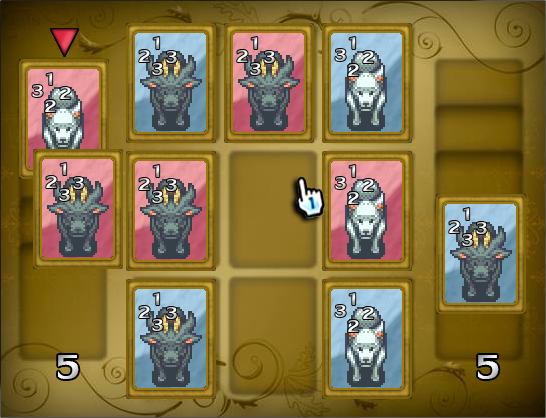 Most people in the game only have 1-3 cards in their entire collection.

There's a semblance of progression and difficulty in the card game(e.g. beginning town uses open and weak cards, while later towns use same/plus combo rules). In fact, some NPC's literally have no purpose in their lives outside of the card game. Sounds hilarious, doesn't it? 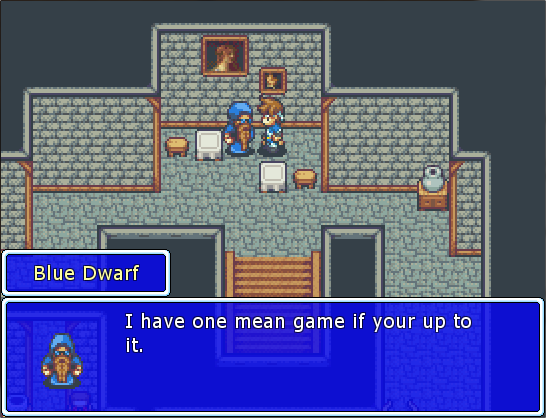 This is his reaction to the death of his kingdom's prince.

Now, on to the ACTUAL gameplay. Dungeons in this game, whether it's a forest, cave, desert, whatever, are all designed very similarly. They are essentially a series of rooms that have clear paths, some of which go to dead ends with a chest. There's basically no variety in dungeon design aside from the tileset used. Sometimes the enemies you run into arent even what you actually fight. I ran into a bat and the fight was actually against 3 mushrooms. Some of the other encounters do have bats in them but I think this was because the actual troops you fight was randomly chosen and not linked to the event. No big problem.

Overall, it's your standard RPG where everyone is totally serious, but the things that happen are full of lols. It's the same style as the other games by this developer so now you know. It plays like an abridged FF game and the triple triad has a strong presence here if you're a fan of that. By the writing style I couldn't really take the story seriously, but the gameplay is there and it's what you can expect from an FF inspired RPG.

The first boss fight should have Mei at level 5 at least. Then she can transform and use her skill to increase the number of turns you have. After doing that she can revert and use ice twice a turn. Transforming and Reverting are key to each boss battle and make them a little easier. (The final boss requires level 20 minimum from Mei to win easily.)

Also, Levy is obviously the best character in the whole game! His wave attack is sooo overpowered!

Compared to my other games you have played is it better, the same, or worse.
(ie. compared to Othello and Dragon Lancer MV.)
bicfarmer

Close
02/23/2018 05:18 AM
Yeah, transform is way overpowered. I didnt really try it till the last few bosses. With all the extra turns she gets and gives the others, it makes Guard even better, since she can heal back damage by just guarding and the same applies to the boys. It get really easy once I started using this crutch strategy. I didn't bother reverting, mei basically became a support healer/buffer by letting the others get extra turns to Guard with. The bosses had way to much HP so turtling was the best way to go here.

author=lianderson
That card game system looks very interesting. Didn't know there was a script for that.

There's a script / demo game for it. I used Gimp to customize my own cards. So you need to know how to use an image editing program if you don't want the RTP as artwork (+you need to put the numbers you want inside the card.) It was a surprising amount of work to just get the graphical part of it done.
StevieRayBones
I refuse to grind with monsters I've just met for money.
265