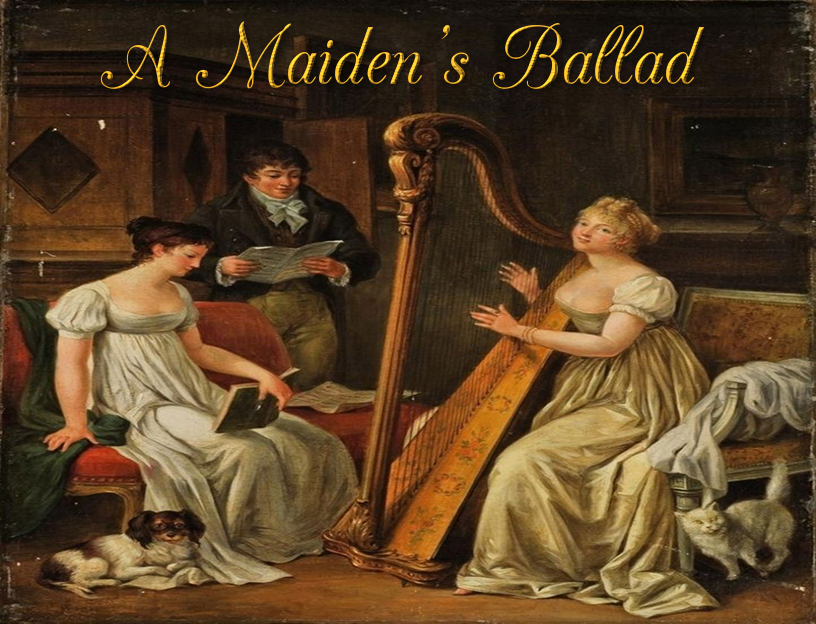 2 reviews
A Maiden's Ballad is a short RPG that I made as entry to RMN's Theme Roulette Event, where each participant are given a random theme to make an RPG maker game out of. I got the word "Passion", which allowed me to create this RPG. Hopefully, the game will do the word justice as you play it.

Cecilia Ashenhurst, an aspiring musician and harpist, has decided to go on a journey to the Harmonica at the capital city of Rainsville. The Harmonica is an organization that helps musicians publish their music and make them known throughout the world. Cecilia, along with her childhood friends: Yolanda Vladimir and Nathan Scollfyld, ventures forth to Rainsville. Along the way, the trio faces difficult and dangerous circumstances. Will Cecilia and her friends become successful in realizing their dreams and passion?

- Colorful and sweet cast of characters

This short 2-3 hours long game was the offspring of that very theme and I my own funny imaginations! XD :D

WE HAD A GODDAMN WEEK. I GOT 20 SECONDS OF PROGRESS DONE. STAR HOW-
Starmage

Close
07/15/2018 07:01 PM
Hi Frogge!! Ahaha!! XDD That's okay, Frogge! ^_^ I think the event extension now allows much more time for everyone, which is great cause I'm excited to see all the releases. ^_^ Besides, I think I'm kinda cheating when I spent the whole monday night awake finishing all the dungeons xDD :D
Frogge

Close
07/16/2018 07:05 PM
Honestly even though I didn’t phrase it like that, I was complimenting you. Your speed and motivation when it comes to game dev is amazing, dude. Seriously, keep it up, you’re doing great! :D

But seriously tho. You got a 3 hour rpg done. In like a little over a week. It’s impressive as hell.

Close
07/17/2018 07:38 PM
Hello starmage! Is the current download the standard stable version or you're still working on it?
Starmage

Close
08/23/2018 12:48 AM
Alright, I got as far as I can, but the swamp boss was too much for me. The gist of it is, victory over boss fights are too RNG dependent. I'll boil it down for you. All bosses have weak abilities and OP abilities. You just pray that they use the weak ones alot and dont use the OP ones that can easily kill your party within 2 rounds. For example, the ice boss spammed his hit-all ice attack four times in a row in my first fight with him, but I handily beat him on the second try. Dying and retrying occurs pretty much at every boss past the first two.

The game itself has a very simple and rigid design. Equipment and enemies are basically the same with progressively higher stats. You buy all the equipment or your gonna get killed by random encounters. Your healer has high MDF/low DEF and tank boy has high DEF/low MDF. The healer and tank boy are both constantly in danger of getting twoshotted by regular attacks if hit in their weak points. Taunt becomes less and less useful as all bosses have attacks that target the entire party, and the taunt boy isn't actually very tanky (if he's hit by magic.) Maybe because I'm under leveled, but I didn't have much options for each boss, they are all immune to status effects so my only strategy was heals and try to kill it as fast as possible, and hope they dont spam their OP skills.

This swamp boss though, can oneshot you whenever it wants. All of them have 2000+ HP and I get hit with this tail whip/earthquake double combo and all my guys die instantly. I just dont think this is very fair, so I stopped.
Starmage

Btw, you really got the hang of the game very well and you've figured out how things work. xD (Like how the healer is good for taking magic dmg, while the tanker for physical dmg.) Of course, as you have mentioned, there are indeed setbacks for this once they take dmg from anything else other than what they are strong with. xD

Btw, sorry you had to go through the swamp boss and their annoyances. X(( I hope it won't be too much to say that the recommended party level to fight them is at least 25 or something xD There you get the casters' strong aoe spells. :)

Once again, thanks so much for this very detailed feedback, bicfarmer! ^_^
Pages: 1