Class and style... but these woods are deadly!

Get ready for something different...

Deadly Woods is an adventure, with a particular style.
At first the stylized graphics reminded the old Sierra adventures to me (in particular Leisure Suit Larry), clearly at the time, in 1987, the characters and settings were made with few pixels. It's not the 1987 now, but I like this minimalist style, that was also used recently in some indie games, anyway Deadly Woods has also more complex nice art, like the portraits that are custom made, but also very pretty! I liked a lot this colorful world with all the tiny details, like the cars and passerby that roam the street of Dream Vale, the animals, the changing weather, and how your room gets decorated with the items from the quests you completed (did you successful save a girl from demon possession? You get a cross)

But which kind of adventure is Deadly Woods?
The story is inspired by Thin Peaks, probably also by the 2007 movie Deadly Woods and also the videogame Deadly Premonition. As the FBI agent Desmond we have to find the killer that murdered a young girl in the woods, and to solve this mystery we have to explore Dream Vale, the town of the victim and its surroundings.

The game is an open world adventure, since you can go and visit any place, enter almost any building, and you will also soon get a police car that makes travelling faster.
Of course since we have a whole town (and also the surroundings!) we have lots of activities and things to do, some will be mandatory to solve the case, others are totally optional but can let us earn money or useful items. There are quests and secrets hidden everywhere, but wait, there's more! The town has a day-afternoon-night system that changes the activities of the residents: for example you cannot buy items at night when the shop is closed... BUT you can speak with the owner of the shop that will be at home! This is a nice feature, even if I've still to find a way to change period of time... and time pass only when outside. 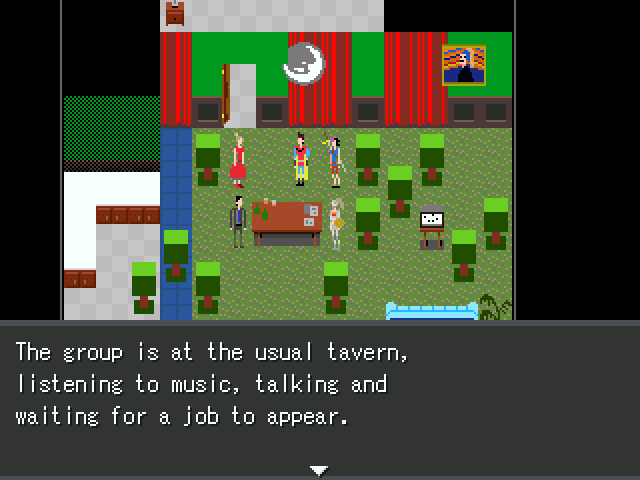 Ok, I was lying this game is ALSO an Rpg!

To heal yourself you have to take a shower or a bath (has the effect of a total regeneration. Oh and you can also use the WC for the same effect!) or eat food (that restore some hitpoints, but you can have a meal everywhere).
Combat is real time, be it hand-to-hand or ranged combat (guns). There's also a place where you can train. Anyway always, always, always save, as death can be quick sometimes, especially if you take some dangerous quest or enter some hidden passage... and you can save anytime and anywhere so there is no reason not to do that! Also remember that victories do not give you any benefit, so except for these situations in which you are forced to fight (like the boxing championship), it's suggested to avoid random enemies and just run past them.

Side activities, puzzle and minigames! The game has plenty of them!
You can enlist in the boxing tournament, play with the arcade cabinets you will find in some areas, and especially in the arcade game room. Different games are available and well, it's a funny addition!
Despite being a game about a murder case there's also humor, as I found some boys telling puns, a dance club in the church (the priest is a Dj!), some parodies (METARU GEARU - Pepe's Awakening) and... even the opportunity to join a group of tabletop fantasy rpg in their game! The Rpg session is a sort of choose-your-adventure with also some "traditional" Rmk combat. Of course if your D&d character is killed you won't die! (but this can happen if you face some angry bikers instead).

Anyway the name Dream Vale is not a case: you can enter the Dream World when you sleep, but the rooms are unlocked only if you solve the quests related to the problems of the different residents (that cannot sleep because of their problems). It's a clever way to explain the full story and learn about the townsfolk, but in most cases they are not mandatory: the notepad in the inventory gives all the step necessary to solve the main quest, but as I said before there's lot of optional content. 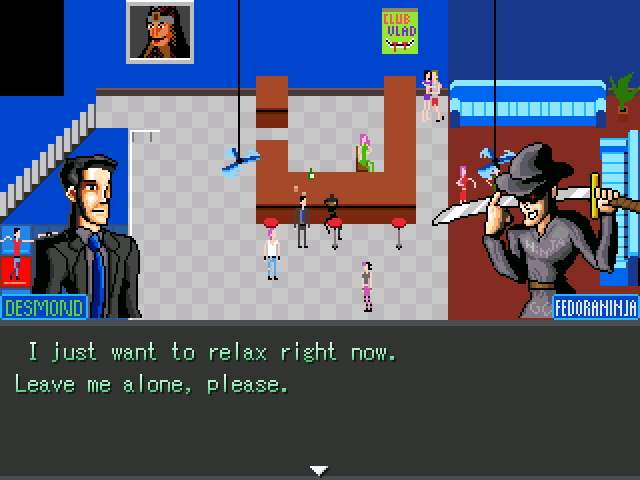 Of course not everything is perfect, and the game has some flaws!
I found a good quantity of typos (amem, bussiness, stabing, carrer, druged, etc..)
Some clipping issues in some corners of the map (like the stairs in the church)
Also some quests or minigames are a bit hard and frustrating, and combat isn't also that easy, anyway this is like the punching minigame in the Lucasarts games: an important but limited part of the adventure.
There are also some things that I do not know if they were cut because I cannot complete them: for example a goth girl told me of one particular drug that is sold by the priest (yes! It's a pill that raises the Hp of 10 if consumed). But even if there's the suggestion to talk about this with the priest, you can't do that. You can buy the pill from the nuns, but the goth girl won't care. I do not know if it is necessary to wait a precise time of the day, but so fare it was useless. There are also some descriptions that were maybe not completed (one says just "diary" if a book is examined, but it's odd: usually you have a detailed description or nothing at all!).
Final problem is that you can save anywhere but nobody tells you when you are entering a dangerous area or difficult quest, so save often and heal often, because nobody will warn you to do that!

The Verdict?
It looks good, has nice music and graphics, lots of content and details.
The word here is variety! You play a console? Bam minigame! You do an autopsy? Bam... (sort of) minigame! And even if not every activity is perfectly realized, I think that the Rmk2003 was used in a clever and excellent way.
And the setting and characters are interesting even if the recall the usual stereotypes of the horror/mystery movies (the sheriff, the jock, the goth girl, the rich girl, the old hotel owner and so on...).

In my opinion, despite the flaws, this game deserves at least a 4. So play it but... remember to save your game!

author=richterw
Thanks for the review!
Glad you liked it :-)

Hey! It was brilliant, I liked both the gameplay and the nice graphics! Something unusual and rich of details! I guess it took lots of work!
Cap_H

author=Cap_H
Cool review! I've meant to play this for ages.

Thanks. You should try it, this is a pretty good game especially if you like adventure games and has a sort of retro charm. I have mentioned some flaws, but for the most part they are due to the limitations of the engine.

Oh, and I admit that there were a couple of puzzles I was not able to solve... but I guess they can be done, sadly I am not too good. ^^'
Pages: 1