"A Thief's Voyage" was developed by walldeaf using RPG Maker VX Ace and is described as a classic RPG with a casual atmosphere. And I would definitely agree this game is pretty casual with it taking me around seven hours to beat this game, but my time is on the high end of things since I spent a lot more time then I really needed to on grinding for stat boosting items for one of the characters. So I imagine a more average play time would probably fall between four to five hours.

On the story side of things "A Thief's Voyage" is pretty basic with the party eventually setting out to gather the four elemental crystals in order to prevent them from falling into the wrong hands. This obviously fails and forces the party to deal with a great evil that was sealed away long ago by a powerful but righteous goddess.

On the gameplay side of things "A Thief's Voyage" lives up to its claims of being an easy turn-based RPG that features all of the usual staples you'd expect in a game made using RPG Maker VX Ace which is either a blessing or a curse depending on your perspective. Thankfully, I'm a big fan of the standard system, but the easy nature of battles in this game makes some of the later battles feel really dull and boring for those looking for more of a challenge. Though, I suppose I didn't help things by devoting over two hours to grinding out stat boosters for Brenda in the initial dungeon. Albeit a lot of that grinding was done in the late game, but it resulted in me having a party member that was more durable then the Shield Hero by the end of it.

If anything the most interesting aspect of the game is that it features two different leveling systems. The first one revolves around the usual practice of beating up monsters to gain levels, but you gain additional stat points based on the quality of your equipment as well which means the game does reward you for trying to beat bosses at lower levels. After all, you want to maximize your stat gain right?

The other system revolves around giving Brenda upgrades that are gathered by defeating monsters. On the plus side this means Brenda has access to really fast growth early on, but may struggle in the late game if you don't devote sometime to grinding out stat boosters for her. Sadly this system still needs a little tweaking in my opinion since the boosters you gain from early enemies are the same ones you get from later enemies as well. So there's little reason for the player to beat up higher level monsters unless they are trying to gain levels for the rest of the party. Which is why I spent so much time grinding for stat boosters in the first area in this game in order to reduce the amount of times the rest of my party leveled up while trying to get enough stat boosters to make Brenda a meaningful member of my party again. Sadly her attack still lagged a bit behind the others even after all of that grinding, but she was so bulky by the end of those efforts that she could easily regenerate over 400 hit points by guarding and could barely be hurt by some of the strongest regular enemies in the game.

On the musical side of things "A Thief's Voyage" eschews the usual background tracks you'd expect in a game like this for stuff like Pat Benetar's "We Belong". And while I'll admit I enjoy said song; it's utilized in this game in extremely poor manner. After all, this song plays during the end credits where we see everyone going their separate ways. Which makes the use of a song that includes the lyrics "we belong together" feel really out of place.

And while walldeaf does manage to utilize the other songs in more appropriate situations. Those tracks still feel a bit out of place since they feel like the kind of stuff you would play to help hype up a boss battle like when they play Tsunami Bomb's "The Invasion from Within" during the battle with Maderas on the PS2 version of "Disgaea: Hour of Darkness".

On the visual side of things "A Thief's Voyage" really struggles to find a unique identity. This is because the game is largely a hodge-podge of enemy sprites from games like "Ragnarok Online" as well as the default tileset for RPG Maker VX Ace. As a result the game's various graphical assets sometimes stylistically clash in ways that are mildly painfully to look at. 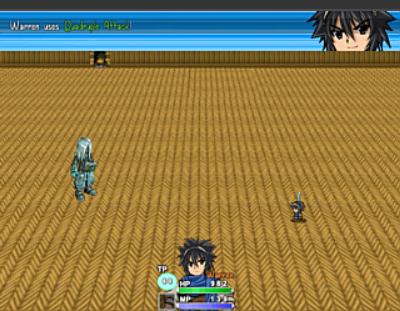 Admittedly these issues usually aren't as pronounced as in the image above, but in some cases they can be even worse. Though, I'll admit it's really odd that the developer even went with that enemy sprite at all considering the monster depicted is meant to represent one of the default playable characters for RPG Maker VX Ace. 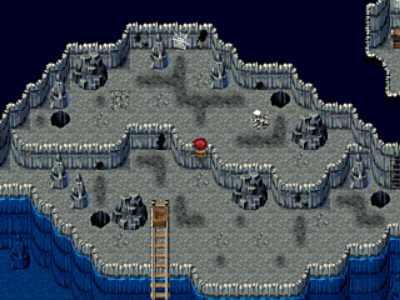 And it's possible to get your cart to go off the rails in the same area.

"A Thief's Voyage" is a mixed bag in my opinion. On one hand the game features a pretty retro story that harkens back to the old days. And I can really get behind a simple mission to save the world that isn't bogged down by the massive lore dumps I've been experiencing in "Meteo Chronicles". On the other hand the game suffers from some really questionable decisions in terms of the graphical and musical assets that walldeaf chose to use in the making of this game. All and all I say this makes for an alright way to pass time considering the casual nature of the game, but there are better and shorter games on this like "Punch Bears" if your looking for a quick game to pass some time.

I will try to improve my next world-saving adventure.