One single chapter of magic!

White MAgic is a cancelled game that was made by LittleWingGuy, author of Villnoire and Swan Song. Despite existing just as a short one-chapter demo, I tried it and I was impressed: it clearly has many features taken from the other two games, and it's really well made and polished. But let's start with the story:

The game begins with Gordon, a young alchemist that has a simple quest: he has to deliver a potion after his boss, the owner of the local store, forces him to go through a dangerous area on the request of one of his customers. The quest is apparently simple, but soon it escalates and becomes clear that things won't be as easy as expected...
Unfortunately we'll never know what was supposed to happen later, this chapter just introduces the three main characters (but I guess it was supposed to be a shorter story compared to Villnoire).

Mapping and graphics are pretty nice as they use the classical First Seed resources that were already used in Villnoire and Swan Song. The forest map is in particular very similar to the first forest map in Villnoire (but not identical) complete with some secret locations that are indicated by the butterflies.
Similarly you can get extra bonuses if you open all the chests in the various maps, exactly like in the other games by LittleWingGuy. Nice! 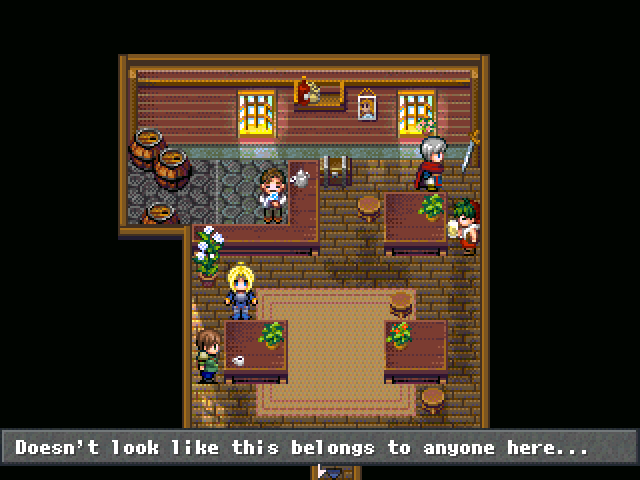 Do you really want to steal a sword from a tavern? Uh, ok go on!

Combat is well done too: Gordon isn't a mage (but has a nice ability that drains mana points and will be useful to defeat the chapter boss) so he has to use some scrolls to use elemental attacks (just having them in the inventory enables him to cast spells), the other playable character is a mage, so she doesn't even need these to cast powerful magical effects! As usual enemies can have different weaknesses, anyway since this was supposed to be the beginning of a larger game, encounters are rather easy, but well done!

I can say the same of the dialogues and the adventure itself: everything is extremely detailed, there is a description for almost every item examined and a dialogue for every character, no matter how useless! Even music is pretty great, I like especially the theme in the main menu. Beutiful indeed!

IF this game wasn't incomplete, it would be a little great adventure, as much as Swan Song, another game that shares many features, even if some of the names used in the game are found instead in Villnoire.

Verdict
This demo is perfect, an example of good design, balance and use of the resources.
I like how the facesets, that are clearly custom or maybe edits, have different expressions and this is just one of the many details of this game. The characters are pretty great too, we only have to possibility to know Gordon backstory, but also the other two are masterfully outlined in few but meaningful situations.
I have just some minor problems with this game: for example the *escape window* in one of the last section is quite hard to find if you do not try to interact with EVERYTHING, but hey maybe it's me! Anyway this can be seen as an example of a well done and interesting game. Maps, gameplay, music... everything is well made and implemented.
The score? It's 4/5 for a little great demo!