My favourite part was the main menu!

The Lovers(Les Amants) is a 1928 painting by René Magritte... wait, this is supposed to be the review of an Rpgmaker game called Novella (made in a month for The 2011 Rmn Summer event), isn't it? Well, yes it is, but if you give a look to that painting you will see the protagonists (two figures that apparently have their faces shrouded by white cloth) of this game. Well more or less, I do not know if this was intentional, but these are indeed two lovers, or better, they were.

This is what we learn just from the prologue, even if the details of the relationship and its problems aren't explicits, but it is true that the game ends with a 'part one' that hints that this is just the beginning of a longer story. Speaking about the beginning of Novella, I cannot stress enough how beautiful and original is the menu, in which you control the male protagonist to interact with the items in a small room to load, quit or start a new game. And we will control him for the rest of the game, even if his loved one will appear in each section. 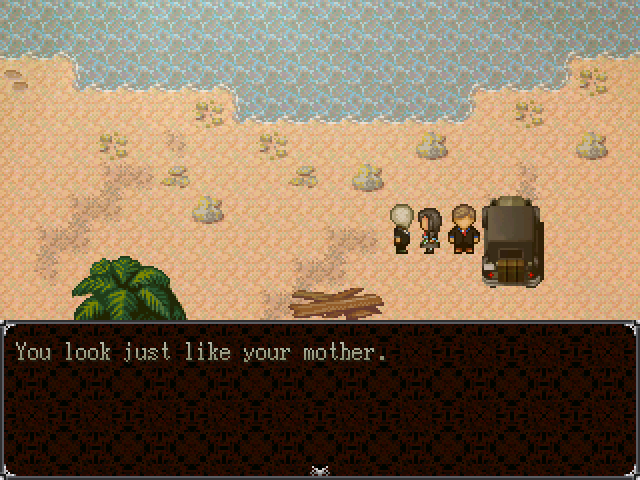 Does she have a towel on her head too????

In fact, aside for the prologue and ending, the game is divided into three sections that at are composed of various scenes apparently disjointed: we start collecting fruits in a forest, then there is a beach, then the protagonist takes a train that brings him to the woods, where a path leads him inside a school!
The story is short, linear and surreal, and it's clear that here thoughs and memories about his love life are what our unnamed character is experiencing.

For the most part the game consists in walking, talking to few characters (that have no faces) and performing a couple of simple tasks, but there are also some puzzles, and some peculiar ones: apparently the protagonist was a pianist, so instead of pushing barrels or sliding on ice, he has to play a piano! To "win" you have to select the right piano keys, and while in some cases you have just to find the right hints. But in one particular case it is necessary to copy the nearby violinist, and for me this was the hardest of the three piano puzzles, obviously because I am musically inept! Of course despite these difficulties there is no way to die or get a game over, anyway saving is possible only when using a typewriter.

Music aside, the game is visually very pretty and atmospheric: it's a dreamlike journey in a surreal landscape that looks strange and familiar at the same time. The setting is in fact realistic and fairly modern (but not contemporary, there aren't computers but just typewriters, and locomotives instead of modern trains), anyway some bizarre details and items that are out of place makes it clear that what is happening is probably all in the mind of the protagonist (that also see himself in the past during some cutscenes). Maps are well made, realistic and colorful but also dark in some parts, very detailed and with good use of light effects (also no "extremely spacious locations" and that is good). 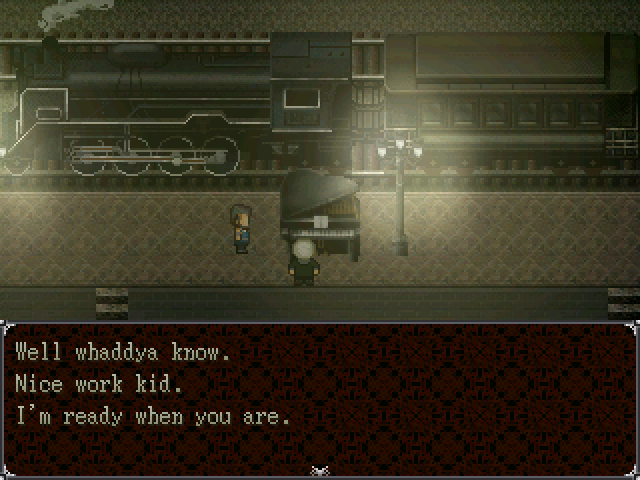 All aboard then, and let's go to read the...

Final Verdict
Novella is a weird game: some ideas are great, other aspects not so much. The story is obscure and seems incomplete with the mentioning of just a part one, but I may be wrong of course (maybe part 2 is just what hopes.the protagonist, to turn back time and restart). The puzzle are ok, strange but not bad, maybe a bit difficult but there is a solution for all of them on the game page, so it is impossible to be stuck on any parts. Maps and graphics are the best part of the game, but aside from style and presentation (that are clearly important) there isn't much else.

The story is weird, maybe incomplete due the strict time requirements of the event or maybe is it is a personal expression of a real life experience of the author. Who knows? The problem is that it is rather vague and... somehow it seems it could have been a bit better. I also do not like some choices, like when you perform a task you read that "a door has opened"! Ok. But where? How? Why?
Lots of questions and no answers, yes. Anyway this is not a bad game, it is ok, very stylish and quite short even if I am pretty sure that most players will have difficulties with those puzzles.