Perhaps the Most Aptly Named RPG Ever

What is the purpose of a game? An often answer to that question is “to be enjoyable.” But as the medium of games and RPGs in particular continues to mature, we find that games, like books and film before them, are powerful tools to invoke feelings and create experiences, even if those experiences don’t necessarily contain enjoyment.

Depression is perhaps the most aptly named RPG I’ve ever played. And if you play this game for pure enjoyment, you will be disappointed. This game is not fun. If you find fun in this game, the game will strip any enjoyment you felt away from you, bit by bit, until there is nothing left.

This probably sounds like the start of a zero-star review. What is there in a game if the game itself leaves you without enjoyment? Why should anyone play such a game? Well, in this case, Calunio has twisted RPG mechanics and the game world itself into a perfect recreation of the suffocating feeling of depression.

To get personal for a second, I want to mention that I’ve suffered from clinical depression for my whole life, so the game felt very familiar to me. Using RPG mechanics to recreate the world-crushing feeling of being depressed is quite devious; I’ve often used RPGs as an escape from depression and then here I find my beloved escapist medium becomes the tool to deliver the very same emotions I want to escape.

I don’t want to go into specifics of how Depression does its job of depressing the hell out of you, because I think you need to see it work its magic yourself to fully appreciate what we have here. Just know that the game starts out pretty simple and standard, but then changes, bringing the misfortune in greater in greater magnitude until either the game ends in one way or the other or you give up. Even the soundtrack reinforces this: Simple tunes that serve their RPG purpose of giving something more to areas and battles, but ultimately they reinforce the core concept of the game, making things feel fake or downright dismal, sometimes in a very subtle way.

I’m sure most people will equate all of this with bad game design. Calunio himself said “in this case, by experimental I mean ‘a big chance of ending up with a really bad game’” in the game’s comment section. And yes, I could nitpick the hell out of almost every aspect of the game from a traditional RPG standpoint, and how so much of it “isn’t fair” or “doesn’t work.” But it does work; just not from our typical viewpoint of providing enjoyment.

Some may ask “What’s even the point of encapsulating the feeling of depression into a game? Isn’t depression something we all want to avoid?” I disagree. I’m not saying people should be depressed, but that people should understand how it feels to be trapped in that depressive spiral, to experience that first-hand. The potent ability of games to share a unique experience is something I want to see celebrated, even if that experience isn’t a pleasant one. 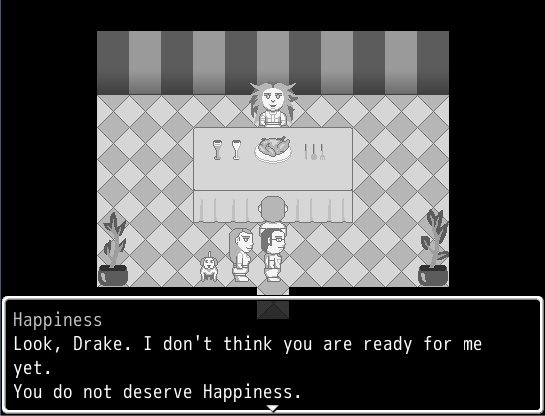 Of course, this means that the game definitely isn’t for everyone. There are going to be plenty of people who can’t, or don’t want to, break the mindset of “games are for enjoyment” or who will just plain not feel like subjecting themselves to depression in game-form. If either of those describes you, then it goes without saying that you will not find this to be a valued experience.

How do I score a game like this? I must admit, I’m at a bit of a loss. Again, by the standards of enjoyment, the score would be pretty damn low. But like I said, that’s not the point. But then, how do I score it? A mainstream audience would hate it. But what we do have here is a short but powerful experience, a game that does its job well in a minimalistic way. At the end of the day, I guess I would define it as “short, unpolished, but ambitious; overall, a successful experiment.” Attaching a number to it is difficult, but I’m going to go with Four Out of Five Stars.

Now, if you'll excuse me, I've got to go find some way to cheer myself up again.

I guess the problem is that the game looks too standard at first glance to be taken as anything other than a standard RPG, but it's really not, like you said. But I'll admit my design faults: the first part of the game (the forest) was supposed to be a bit more fun/engaging. For a number of reasons I decided to make a linear path instead of a proper dungeon (functionally there's not such a big difference), but I guess the fact that players weren't able to cross such a small path without grinding a lot was too frustrating.

As for the rest of the game, I think you pretty much caught the essence of the whole thing.

I'm just curious about when did you decide to quit the game. Though dying (either in battles or by losing XP) is a valid way to end the game, there's actually a proper ending. I haven't heard from anyone actually getting it, though.
alterego

I haven't heard from anyone actually getting it, though.

I got it, and I'm sure I mentioned it somewhere. =B I liked the ending. The message displayed in it, despite its simplicity, is probably the singlest, most poignant thing about the entire game. It almost gives meaning to all the dying the player has to endure... Too bad you have to be a psychic to get it in your first try. Or by the time the players decipher the intricate steps they have to take in order to get it, I'm sure the game would have long overstayed its welcome in their eyes. *cough*badgamedesign*cough* =)
unity

Even if the game wasn't called "Depression," I found that the game feels like something is off and strange even in the very beginning. Hopefully other players will also pick up on that.

author=calunio
But I'll admit my design faults: the first part of the game (the forest) was supposed to be a bit more fun/engaging. For a number of reasons I decided to make a linear path instead of a proper dungeon (functionally there's not such a big difference), but I guess the fact that players weren't able to cross such a small path without grinding a lot was too frustrating.

I won't say that first part is devoid of fun; I was entertained by the early grinding and finding new equipment via enemy drops. You also get your first party member to make things a bit more manageable. I also loved seeing what enemies would show up. I found them very creative, like "Fear" that paralyzes you and "Envy" that drains your HP and MP. I personally don't see this first area as a failure, though I guess at that point I was bracing myself for what was to come; I knew things probably wouldn't stay this manageable.

author=calunio
I'm just curious about when did you decide to quit the game. Though dying (either in battles or by losing XP) is a valid way to end the game, there's actually a proper ending. I haven't heard from anyone actually getting it, though.

I was quite set on getting to a proper ending when I first started, but after a lot of dying I was starting to consider the possibility that failure was the only option. The farthest I got is when (spoilers)

Show
You find your parents dead and your girlfriend becomes the queen (I found it quite creepy that she looks just like your mom at that point) and becomes pregnant. After that, I succumbed to the ever increasing EXP drain curse to the point that death seemed unavoidable.


Given that there is a definite endgame, and I have an older save file where the curse had not yet grown quite as terrible, I'll probably reload from there at some point and see how much farther I can get.
calunio

author=unity
You're welcome! :D
Given that there is a definite endgame, and I have an older save file where the curse had not yet grown quite as terrible, I'll probably reload from there at some point and see how much farther I can get.

You're very close. After the point you reached, just get back to the Prince at the center of Princetown and he'll give you final instructions (though finding out exactly what to do requires some interpretation).
Cozzer

I tried buying both the donuts and the poisoned knife and using them.
The donuts seem just a way to die faster, and the knife... well, it did advance the story, I guess, but the prince in the center of Princetown just keeps repeating himself.

Do I really have to climb the Tower...?

(I hoped I could use the knife to murder Happiness, and that would have been symbolic of my character stopping pursuing an ideal, unreachable happines. Or something. But I couldn't. :( )
calunio

Show
After doing everything the Prince in the middle of Princetown tells you - leaving your wife in the throne - buy donuts and kill yourself by eating them in the Lake of Awe.
Cozzer

It feels a little strange that having used the knife changes nothing in the ending, but i liked it.

Is it even possible to defeat the demon mage on the top (?) of the tower?
calunio

Close
02/05/2014 03:38 PM
A very good review of a very challenging story (philosophically and morally speaking, that is.)
Novalux

Close
02/06/2014 03:20 AM
I tried to get the true ending, but it wouldn't let me eat two donuts in a row, and when I exit I die. As much as I want to see the "true" ending, I just cant stomach another run of this game. Not because its bad, but because its so damn effective. So I'm content with dying in the middle of the town square, next to the doughnut addict, with a high score of only one floor. If you will excuse me, I'm going to cry myself to sleep now.
Liberty

author=calunio
It is possible, but it was not meant to happen. If you actually defeat him, the game reacts as if you cheated (that's what happened to Liberty on her LP).

To be fair, I cheated to defeat him - I'm pretty sure I mentioned that in the video - because I was stupid and thought that was the way you were supposed to go (and since the first 'boss' had been so hard until you grinded into oblivion I figured the second was the same... too many RPGs under my belt, I believe. I'll have to change that one of these days. ;p )
Pages: 1