Back to the roots...

... of Rpgmaker!
Clouded Heart is a classical old-style rpgmaker games that clearly takes inspiration from Final Fantasy, Chrono Trigger and other glorious jrpg games. But is it as good as them? Let's find out!

What I saw
... in the beginning was a mediocre game. Yep! The beginning was hard for me, for several problems I encountered: the first is the slow movement speed of the main character (that made me remember of my bad experience with Legion Saga), then the mapping. Most maps are huge but empty, for example the sewers are absurdly spacious and... well there is not much in terms of details or anything. I absolutely do not mind the use of the usual RMK chipsets at all, but many other games I reviewed used just these with great effect, and unforuntately here mapping is bad, and I found tedious navigating some dungeons.

Then there were the portraits: I absolutely do not mind them, but I think they would have been better if smaller as they take almost one third of the screen and I found them to be a bit distracting as they sometimes covers the focus of the scene, while they do not add much, but maybe this is my problem... I just prefer the facesets or smaller portraits (just to give an indication, many games I saw for example used edits from Fire Emblem). Anyway the pack of portraits has never been a problem.

A final problem was that the beginning part of the story at first did not involved me, but then... 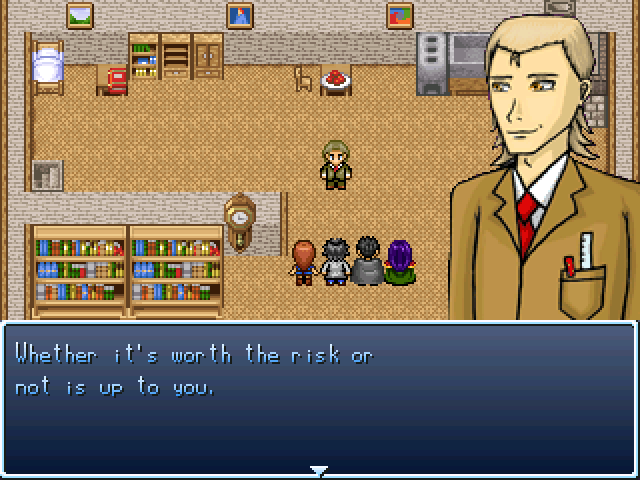 Yep, it was well worth the risk!

What I experienced
... BAM the story entered it's best part. It start slow, but then develops in an epic adventure. At first I noticed that the characters were few, the party is made of just four heroes, two warriors and two mages (one is also a healer), and well they are few compared at all the recent Rmk2003 I reviewed. But then I noticed that they are well characterized and each as an important part to play.
But not only the main characters are well developed, also the world and its story is very refined and detailed (unlike the maps, so this was unexpected).

Before I said that Clouded Heart is a (very) classic jrpg, so expect lots of combat, some puzzle and some optional sidequests.

Combat is ok: one one hand it's classic, front view monsters (also from the usual Rmk resources) and battlers, exactly like in Legion Saga II or FF:Endless Nova.
But, unlike the games I mentioned, here combat is quite easy, you level up fast and also hit very hard when you upgrade the weapons. I found little use for the offensive abilities unlocked and I used only those attacks that hits multiple enemies. Other skills like healing and those who penalized the enemies attacks were instead quite useful, but hey the base attacks were totally devastating, and this is a bit strange as in most other games these are almost useless especially against bosses, and you had to rely to elemental weaknesses, that here I saw having not much influence on the damage caused (clearly creatures of darkness took almost no damage or 1 point from "Dark" attacks, but beings of ice and fire took more or less the same damage from the different elements, and that was almost half the base attacks!). Said this, I cannot complain with easy combat, as it lets players focus more on the story, instead of spending time micromanaging the team, lets you escape these annoying random encounters without losing much, and lets you hoard tons of potions "just in case" you will need them later. Ok, It's my playstile, but obviously in most games you cannot stock many resources. Here you can. 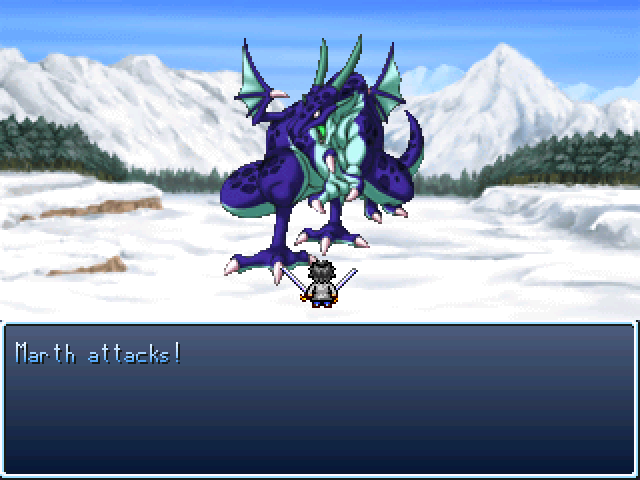 I also said puzzles, isn't it? Yep! We have them, and they go from little adventure/investigation tasks, logic puzzles, to the "walk the correct path", quizzes on the setting and so on. Nothing particularly elaborated, but a nice diversion, not too hard or annoying.

Music is a good selection and I recognized clearly the themes from Final Fantasy and Chrono Trigger. I also recognized the theme from Exit Fate main menu (I do not know the source), and well, I like the choice even if not overly original.

What I think
Well, it's hard to say: on one hand I liked playing this game to the end as I found it entertaining, and I liked a lot the story. Then I think at what it could have been with something more, just a little more that would have made this a masterpiece. Pity becaouse it would have been even more entertaining and interesting if some locations and sections did not looked like fillers (yeah, fillers are everywhere but sometimes placing a scene with side characters and events, dialogues, little pointless things that entertain the player instead of going straight to the point, that instead is what heppens here!).

So what? Well this is better than most other games (that copy much more the first Final Fantasy games) so I suggest to play it if you don't expect much in terms of graphics and gameplay but you can appreciate a great story and a game not unlike the first old jrpgs. So yes, that's why "back to the roots"! It lacks style but the substance is good. 3 would be too low, 4 too high so for me it's 3.5!