A flawed game, but jeez I love this protagonist.

This game is a demo and is in an unfinished state.

Story: You play as Elena, a young girl in love with the lute, possessed of a flighty nature, for whom something special is apparently going to happen, if all of the mysterious, prophetic individuals snickering at her are of any indication. Elena has many roles: lazy daughter to badgered by her father, the rope in a romantic tug of war between her brother, Lucas, and her friend, Lillian, and apparently, she destined to be the hero of the town. A mysterious wizard has come to town, and at the end of the day in which you can choose whether or not you're going to join the town guards, collect herbs, and help people out with random stuff, he burns down the Elder Hall and kills a bunch of people. Elena goes chasing after him, only to have him throw giant spiders at her and her friends. Good times! I don't know what happens after that because if you have a conversation with Lucas by the inn, you turn invisible, and I hadn't saved for awhile so I didn't go back to a previous save and make my way back. 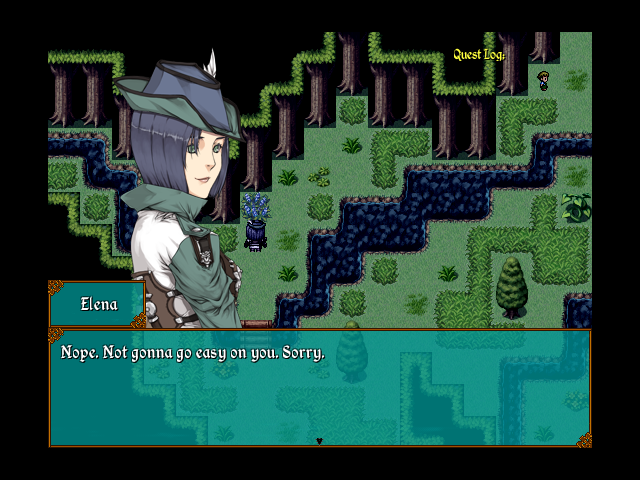 
Writing: Okay, I really, really, really like the writing and the story in this game. Or at least--there isn't enough story for me to know if I like it yet. I just like the people. I love Elena, and Lillian, and Lucas, and Nancy, and Guard Captain Vance. The characterizations are really very well written. Maybe the art helps because the character busts are really expressive. This might be the first time I've played an RPG Maker game where the characters felt this human and relatable. Anyway, I've gushed on the writing enough. Time to be mean.

Gameplay: Well, not time to be mean, yet. There are some minor complaints about gameplay but nothing really major. So, the game just builds bog-standard Yanfly alternative to the standard battle system with no real alterations, except for a sideview battle system. I would imagine Galv's or Jet's sideview, because it's definitely not Battle Symphony. That said, the miss chance is really ridiculously high on attacks to a pretty unacceptable degree. BicFarmer in a comment suggested that Lucas was the only with the problem, but I disagree. I think all melee attacks missed way too much to be allowed, and this was on Story mode. I don't mind so much the fact that consumable items are required for some combat skills. As long as it's not a hard to get item, I'm cool with it. A lot of game systems do it.

Also, there's some kind of gathering system going on here. So far, you're only finding restorative items, but there's so much more that could be done with systems like this. If you're just finding herbs here and there, then it's basically flavor to replace treasure chests as a source for consumables, and that's fine. I just feel like, if you're going to do something like that, you may want to do something a bit more with it, like a crafting system, or a special barter system. But there are also treasure chests. Most take keys. Some don't. Also, this game uses the quest log script. ^_^)b 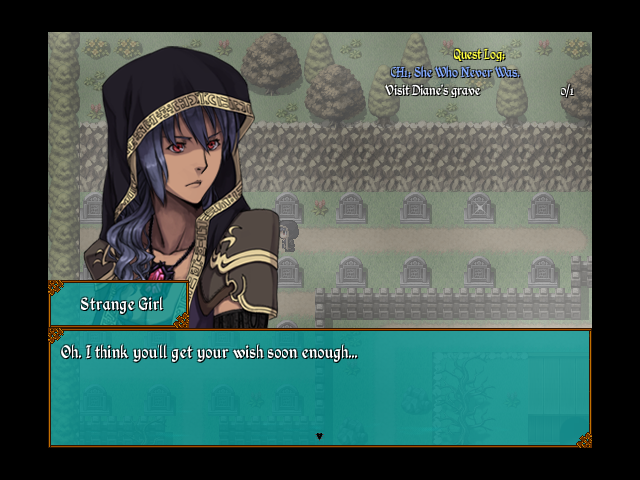 
Graphics: Graphics are a mixed bag, and it definitely hurts. As you can see from the above screenshots, the tiles and background are mostly RTP. So are the NPC, but the main characters, while also 32x32 chibi, similar to RTP, are in a different style that makes them standout. Then, the Holder's combat sprites not only don't match the character sprites art style, they don't match their appearance and clothing. I hope they are just place holders, because then it's okay, but if they're not, then seriously! Get on that! Fomar does a sideview battles script that just uses the characters' walking sprites, and you know, it does just fine! Whatever, the graphic styles clash really bad and that needs some attention.

Mapping looks very nice, but there are several mapping errors, particularly involving elevation in the hill paths. The dev is trying to make the trails look like they go to other levels, and they're doing it by putting the wall border along side the cliff wall and having it just end abruptly, which not only looks really strange, but it's done at incorrect perspective in almost every instance.

Sound: Music is a mix of RTP and music that I can't identify. The music sounds really good, but having heard the RTP music so much, it really stands out when I hear it. I'm sure I'm not the only one.

Conclusion: I really like these characters, and I want to see more of them, and I want them to not turn invisible when I have optional conversations between them. I also want combat to be better balanced and the battlers to actually look like the characters. If I were rating this game, I would probably give it three stars.