UUP Gemstar - A quick view on life as a space navigator

As a 2015 Christmas present I decided to do a review of U.U.P. Gemstar by RACHEAL and MakioKuta

I did not play April was a fool yet so I’m going into this game open minded.
Realizing it was a production made in 2014 and abandoned since that time. 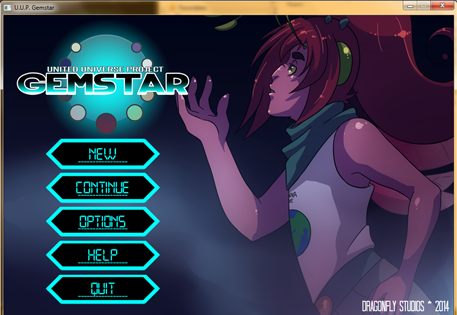 The game starts with you getting onto the UUP Gemstar as a rookie recruit just after your graduation. And I must say it’s a fun bunch of characters you bump in too. The game play is fairly easy where you have a lot of text and a choice once in a while.

It’s a chose your own path story combined with a character building game. 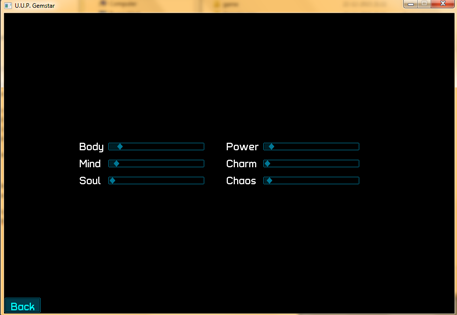 Your character builds on a couple of basic stats,
Based on your choices the stats change. I haven’t noticed the stats leading to different choices further up in the game, but the possibility is there.

MakioKuta is the graphic designer and his style is fun and recognizable.. There is a lot of work to be done in the background. But after playing for 5 minutes I was totally into the sketchiness. So I would definitely not worry about that.

The demo as it is uploaded here goes on for 5 game days and once I even made it to day 6. But this is only a short time to pay the game. Every day is divided in 4 parts where there are actions to take. So max 20 choices

But it's so much fun to look at the faces of the characters you just told them you fancy them. 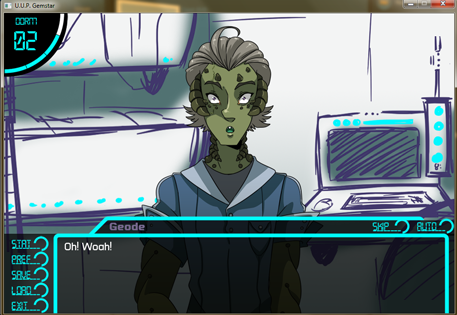 Don't look like that, i just told you i love you!

So I played the game for a couple of times focusing on different characters during one run. All the characters do have their own story and this gives the game a lot of depth. 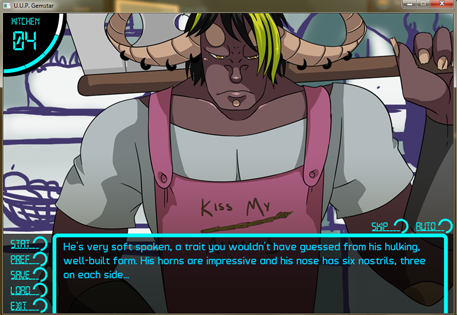 I just love the guy in the kitchen he a sweet the hulk and someone’s little pet I think ;)


But also the other characters are interesting and even open up new places to go after talking to them.
So all together I will advise everyone to play this game. This will pressure Racheal to continue developing it. In the mean time I guess I’ll have to go play April Fools.

author=ErikHolland
This will pressure Racheal to continue developing it.

One can only hope!
MakioKuta

Close
01/02/2016 10:15 PM
Thanks for the review! It'll probably please both you and Sooz to know that it's the next thing on our hit list. First we're polishing up AwaF and then it's Gemstar. We learned a lot working on AwaF that I can't wait to apply to this game.
Sooz