I stumbled on this game for chance. A lucky accident since I love old Rpgmaker games I've never seen before!

The game begins with a prologue in which you don't play the protagonist (funny note, this is the third time in a row that I review a game that starts like this!) but a one-winged-angel... hm... or maybe just a guy with a single wing (in the beginning I believed it was a sack slung over his shoulder!) that fights demons and templars and is overpowered. But this serves just as a sort of tutorial for playing the game.

Then BAM: choose your class! (Hey let me save first...no? Ok then). You can be a warrior or a thief, a mage or a ranger but even a bard. Every class has different edges and weaknesses: the rogue can backstab but is limited in equipping gear, the samurai has magical powers but can wield only a katana or a wakizashi.
I chose the monk... I liked the idea to punch soldiers, beasts and robots in the face! The monk cannot equip ANYTHING, anyway it's proved to be very strong.

Did I say beasts and robots? Yes! The game is set centuries after the introduction and sees you as a special agent working for the resistance that opposes some sort of powerful lord that created a tecnological city.
Magic and technology! This looks like Shadowrun! By the way this is only the beginning because later you'll visit a medieval city, fight dwarves and drow, explore an ice castle and some desert cities, kill undeads in a cursed tower, visit a facility full of mutants and the lair of some huge worms, and so on. Lots of adventures, a linear story path, but still good. 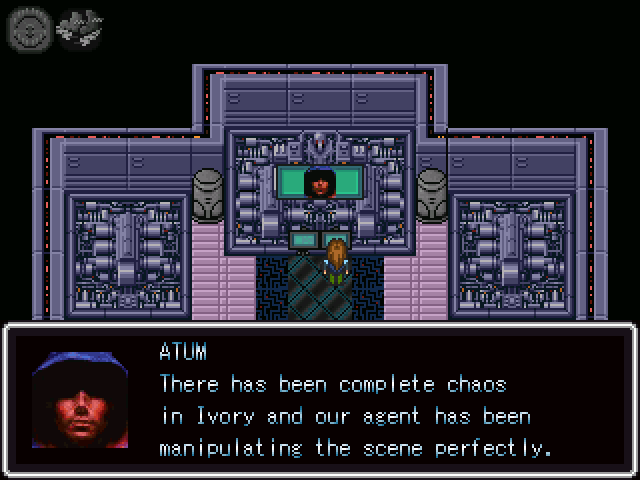 Of course you are not alone, there are party members: a mage that is also a hacker, a cleric that is also a scientist, a... hm... guy that wields a chaingun and wears a chainmail. My monk/agent fit very well as the combat specialist. Later you will also find a bard, a paladin (a warrior that heals) a thief (with that backstab and a cool find/remove traps skill that works like in Baldur's Gate) and a white knight that paralizes opponents. I did not try the other classes but I guess that they play exactly like the companions.

You earn levels after combats, as usual. But wait, there is more: you also earn one or two points after each combat, that you can use to learn abilities (whose cost was 50 or 100 points each). Some are "passive" (they just increase the damage output, the defense, mana or hit points) and others are "active" (for example the monk can learn an ability to heal himself).

But let's speak about combat: this is the standard front view Rpgmaker combat with the difference that Mages and Clerics select the memorized spells... or abilities from their spellbook. These are used like the usual abilities (they cost MP), but, surprise surprise, no Fira or Firaga from Final Fantasy, because they are all taken from Dungeons and Dragons!

Oh and another thing I loved is how the attacks are animated a la Phantasy Star: not only I could clearly see my character punching the opponent (see the pic below), but when I gave a shield and a blackjack to Marx instead of his staff, the animation changed accordingly! I was impressed by these unexpected details.

Difficulty is just ok, never had problems, not even with the bosses even if after you reach the medieval city there is a sudded difficulty spike (not to mention the big worm dungeon) but nothing that I couldn't pass. The only fights I lost were the ones I was supposed to lose. Anyway it's suggested stocking lots of healing potions as, except for bosses, it's all about random encounters.

Besides combat there are some (quite simple) puzzles, some stealth sections, a couple of shoot'em up minigames, traps that will have to avoid, hidden switches, keycards and passwords to find and so on. The typical adventurer's job.

Graphics are ok, and mapping is ok too, nothing exceptional but really functional, there are few spots here and there where you can enter the walls but these errors are few given the huge quantity of locations.
Music is good, I liked that, especially the evocative theme of the main menu and the music on the city map. 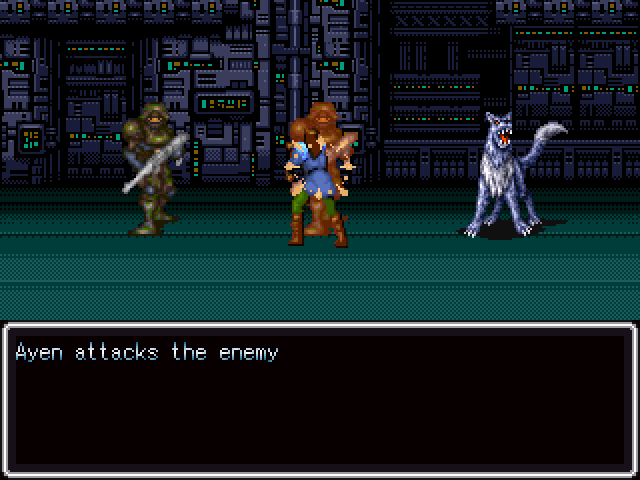 Ok sure, this is a gem but not without some flaws: first there is the problem with the portraits: some are really nice (especially Celine, Yurak and Lenna) others are blurry and ugly (Marx, Jade and Sirran), and it's a pity since otherwise the game doesn't look bad at all!

Then there are some typos, for example:
"Presense"
"truely incredible"
"any meaing in my lif"
"traped"
"nessessary"
"enemys"
"thier"
"tradegy"
I surely have seen lots more, but if they do not bother you, that's ok!

A thing I hated was the "quest for the crowbar": at a certain point you have to enter the sewers but you need a crowbar to open the manhole and no one tells you where you can find one! No hint, nothing! I had to check every location in the city until I found the only shop thet sells them, but hey, in the meantime I even manage to find a hidden secret location before being able to buy that damn crowbar (that was destroyed on the use, and luckily the next manhole I found wasn't mandatory for the mission you have to play)! That was a bit frustrating, and someone probably would stop playing. If someone mentioned that tool shop in the slums it would have been far easier!
Similarly in many parts you have to read carefully the dialogue in order to understand your next move, or you will be lost.

Then there is the part in the medieval setting with the drows and the dwarves: this part feels a bit out of place (are we in Forgotten Realms now?) and very... boring comparing to the rest of the situations (a special agents that does exciting missions, goes to parties, flies helicopters and meets criminals and gangs). I liked the desert war part and the honeymoon much more! 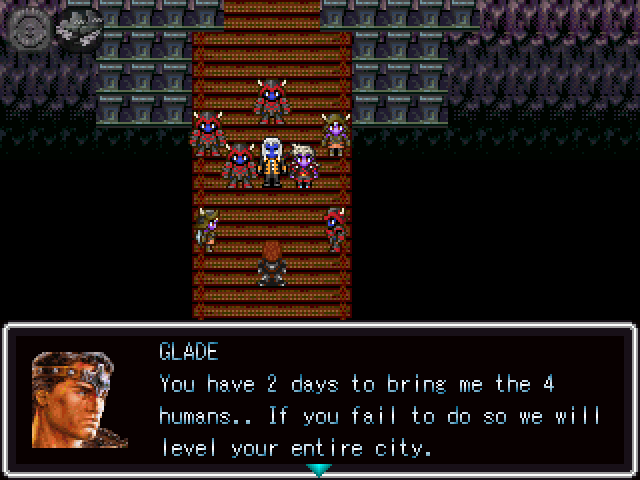 Final Thoughs
Heaven and Hell (episode 3? What about others?) is a nice game with some great touches and parts. For example I loved the section in the office building, when the lights go out, you see a shadow running and a spooky music starts playing! The dark metropolitan city is well depicted, and while chipsets and mapping aren't excellent (I had trouble understanding where I had to go, for example during the abandoned factory quest). I liked also the little touches like the wardrobe that conceal the secret base access and can be moved... totally unnecessary, but this is an example of how much care went into this game and its details (about details, the demon of Lust has a second head on the crotch!!!). It's a huge demo with a great story (even if not too original... there are lots of references to the catholic religion) that really deserved all the time spent despite the few defects, given the amount of content.

I give 4. A great tale of war, love and magic.
Very good. It should be more played and renowed.

P.S.- learn the Knock spell asap! In the beginning it is optional but later it will become mandatory to progress! (You'll have almost always the wizard Celine with you so no need to play one. I suggest playing a monk or a warrior due to the large number of combat encounters)