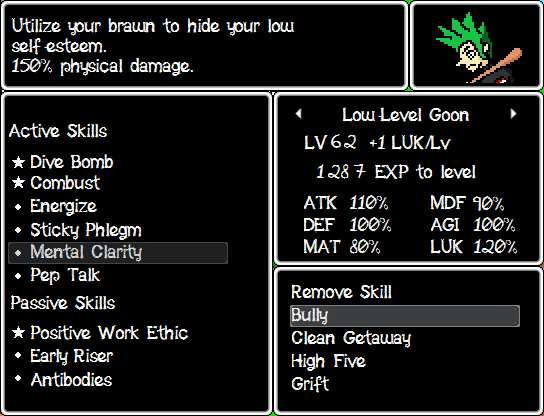 But yeah, this seems like it could be cool. Does each class get their own skills only? A lot of these seem to be only character/class based. I do like the fact that you don't use actual numbers but instead give percentages. That's a pretty neat idea to show how each person stacks up against each other and how the classes change stats.
Housekeeping

Close
03/17/2015 01:20 AM
The way it works is that each class gets its own subset of four skills. Whenever you change to that class, you get those four skills. However, if you unlock a skill by leveling up high enough, you can equip it in the active skills list. The star icons indicate skill slots that will work regardless of your form. So, here, you could pick "Bully" from the Low-Level Goon's skills, and if you were to put it in a starred spot, you could then use Bully regardless of your transformation. Non-starred spots are only active when you're in Jimmy's normal form.

I probably should have taken a screenshot of a lower-leveled character so I could show that equippable skills are level-locked, but I seem to have ironically made the Low-Level Goon rather high leveled.
Liberty

It sounds like it'll be fun to mess around with.
Punkitt

toiling away in the makerscore mines
2754

Are there skills that have effects that depend on your skill count?? I guess not?
Liberty

Close
03/07/2016 01:41 AM
You've never played Secret of Evermore, have you Malandy? Sometimes having too many skills in battle can be a curse, especially when you want to go through them quickly. Also, I like to remove all skills and then customise skill lists carefully, with putting certain skills at the top of the list. It's faster to do that by removing all skills instead of swapping back and forth.

That said, maybe the skills equipped get experience cut across each of them, so the less skills, the more experience each gets? That'd be a pretty neat system, actually.
Housekeeping

And, no, there aren't any skills that get stronger based on your skill count.
Pages: 1