Sorry for being so late with the update, but the past month has been pretty hectic for me. I mean, it still is, but you deserve to know what's going on. So here I am. Good news, though: me being so quiet on the game's progress means that I've been putting my nose to the grindstone, and quite a bit has been done! I've spent so long tweaking and polishing the prologue that creating all new content is a feeling I had started to forget about.

"Nova, it's been two months, and you said you'd update once or twice a month. This update had better be worth the wait!"

Well, it has. You may be happy to know that Aeyr chapter 1 is pretty much done! The maps have been laid out, the cutscenes have been written, and the enemies and items have all been added. It's still too early to celebrate since I've still got a lot of polish left to add, particularly in the cutscenes and dialogue, but you can play the game all the way to the end of Aeyr 1. Yay! 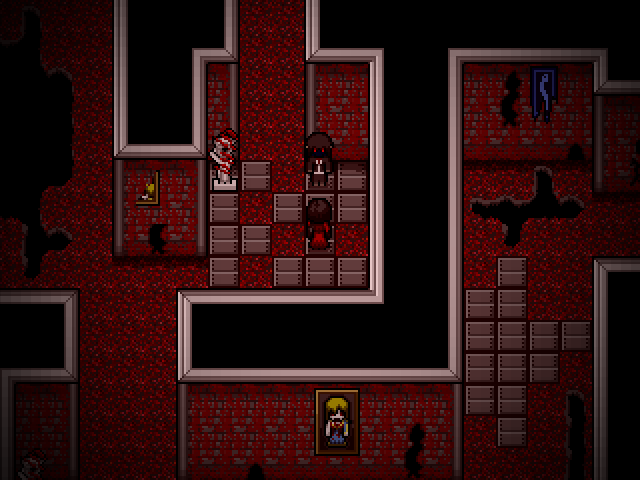 Who could this mysterious stranger be?

On the battle system side of things, more and more fixes and changes were made. The biggest one that's been a thorn in my side for a long time was an A.I. issue for enemies with multiple actions. Say a boss has three actions for turn and say the A.I. selects three magic spells for that turn. Magic costs about 40% SP each, so it would be impossible to cast all three spells in that one turn. What RM does by default is, if a skill is invalid, that action is just dropped from the queue and the enemy will just do two actions that turn. With my fix, if such a situation ever happens again, the enemy will instead default to a basic attack for that action. If there's not enough SP for even a basic attack, the foe will then Focus and regain 50% SP instead. This is to ensure that all 3 actions will be used in some manner when they attack.

So yeah. Bosses are gonna be harder now. Lucky you.

I've also modified the EXP decay formula to be more relevant when you gain a level. Originally, it was just the character's level divided by the troop average level. The only change I made was squaring both the character's and the troop levels before dividing them. It creates a rather abrupt dropoff, but one that I feel helps make players aware that they are getting too high a level.

A lot of time was spent tweaking the abilities of Aeyr's companions. The intention is that each party member offers a personalized twist on the established battle mechanics to feel like unique characters that play differently from one another. Trill's Miasma Charge, for example: 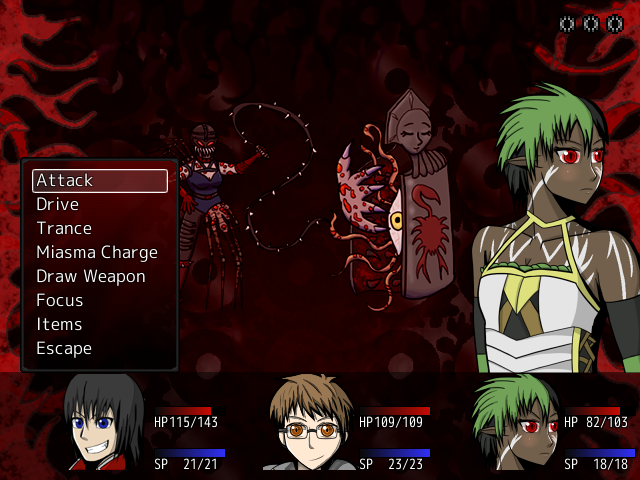 A fight near the end of Aeyr 1. unity did such a good job on these monsters!

Trill, being a Manna, is capable of using Miasma Charge just like the monsters can and gain the exact same benefits. However, what was once limited to her Trance tree is now it's own command in battle. The change was made because, in the case of Trill receiving a Head Injury, she would be unable to clear the ailment using Miasma Charge. As such, the command was no longer classified as a Trance skill and is its own thing. This goes for enemies as well, since before, inflicting a Head Injury would have been enough to prevent them from ever using Miasma Charge. Now, if Trill is hampered with a bunch of ailments, she can power up and clear them all out!

A side benefit of this relocation is that Trill's move list will now look more whole. Being a Manna, and full of Miasma, she is prone to corrupting any magical relics she touches. As such, Trill will be unable to equip magic Relics. She can still equip extra armor like the manuals you may have found during the Prologue (and if you didn't, well... surprise!), but Relics like the Blazing Heart will be permanently unavailable to her.

As for Luke, well, he's gained a new set of tools. And I mean that literally.

It always bothered me that Luke never had any equippable Offhand items (renamed to Personal because it was more fitting). Since Luke's skills lie everywhere but physical combat, Personal items felt unnecessary. Call me OCD, but him being the only character that would always have a big fat EMPTY next to the Personal item just felt wrong. However, further testing revealed that Luke's magic alone just wasn't making him useful enough in a scrap (which is a hell of a thing to say considering how strong magic attacks are). Luke was instead being designated as the guy who uses items. Once I hit that realization, the idea to give Luke abilities that make better use of items! And thus Luke's side packs were born: 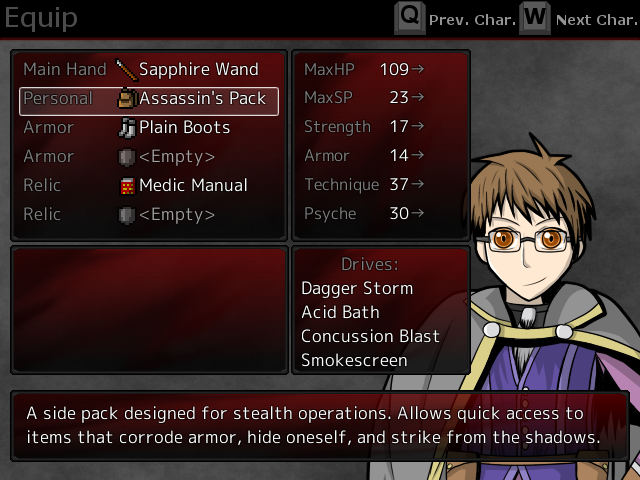 Luke can equip various side packs that make use of attack, healing, and even loot you find in the field. These abilities don't really do any more damage, but their intent was to take an item's effect and spread it out to affect the entire party or troop. For example, Luke's Dagger Storm uses three Throwing Knives to hit every enemy. And since these moves cost items and not SP, Luke will have a few more options after casting a spells.

Does this make Luke OP? Not really. Remember you can only carry 10 of each item type, so spamming these moves will empty your pockets really fast. Plus, it may not be efficient depending on the situation. Using 3 Throwing Knives when there are only two enemies isn't a good idea, and neither is using 3 First Aid Kits when one party member is at full health. I've run though Chapter 1, and there was no situation I could find where such an ability can be abused. So it looks like Luke's side packs are here to stay!

Next step is to get started on Mia chapter 1. Looking forward to showing off the last of the party members!

I'm sorry about the silence! Thanks for checking in!

Close
11/28/2016 07:02 PM
Harder bosses, hm? Based on how difficult some of them (emphasis on some) already were, I hope this isn't going to discourage players who struggle with the battle system. After all, a lot of the enemies in this game can became very dangerous very quickly if you let them.
As far as I'm concerned, though? Bring them on!

On a more serious note: I really, really like the side packs mechanic for Luke. I've always wanted to see a character whose skills use consumable items in battle being implemented in a way that actually works. Because I found that a mechanic like that is really hard to do right. But as his skills seem to really require striking a balance between cost and usefulness, and taking into account the limited amount of items the party can carry, I think you might have found a way to successfully pull it off. The fact that Luke can actively use the otherwise rather useless loot items only makes it better. I'm looking forward to trying out his abilities in-game.
Red_Nova

Close
11/28/2016 07:58 PM
Well, harder in the sense that enemies with multiple actions will finally use ALL those actions, rather than drop the rest of them when SP falls below their next move's requirement. If anything, this fix means I have to LOWER some boss stats! Funny story: after fixing the bug, the end boss of Aeyr 1 immediately steamrolled my overleveled party because it kept defaulting to basic attacks when it would have otherwise done nothing for the remainder of that turn.

This fix also means some tweaks in attack patterns are necessary so they don't constantly spam Focus and regenerate all their SP just when you bring it down enough to deal some damage. Now the emphasis in boss fights is placed even more on their moves, ailments, and battle effects and how to counter them rather than high damage. So yes, while having a boss act three times rather than two-three times per turn is harder by itself, the end result is that the fights will be more dynamic and require more planning to win.

Close
11/29/2016 12:56 AM
Aha, Trill's allegiance is revealed! I like your idea of making every one of Ayer's party members have a unique twist on the battle mechanics, it sounds like it'll really cement the "Devil May Cry" tone you said you were going for -- superpowered weirdos who have to fight other superpowered weirdos.

Close
11/30/2016 02:42 PM
Carrying 99 of each item upsets all balance of the game. There would be no need to use skills when you can just go for direct damage all the time by spamming attack items from the character with the highest Tech stat and heal whenever you want. Since you can only carry 10, you'll need to learn how to properly utilize each character's abilities and manage SP in conjunction with items.
NeverSilent

Close
11/30/2016 03:38 PM
I'd even go one step further and say that a limit of 99 per item is just as arbitrary, if not more so, than a limit of 10. The former would just be a result of engine limitations or RPG conventions. Applying no limit at all just wouldn't work, and the only "realistic" alternative would be a limit on the total number of carried items, regardless of what they are. And even though that solution would be more true to the survival aspect, it would also cause balancing problems and make the gameplay less interesting. Because with such a setup, nothing would stop the player from just loading up on the items they find most useful and ignore everything else, instead of embracing the variety in items by having to make good use of whatever they can get. So I'd say that even though it's not completely realistic, the limit of 10 per item type is a good compromise between practical gameplay requirements and conveying the survival aspect.
Crystalgate

Close
11/30/2016 04:30 PM
I have a hard time thinking of anything battle related that you wouldn't break by raising the item limit to 99. The item limit is not just an aspect of the game balance, it's the very foundation of it. There is no game balance at all without an item limit.

Anyway, the item Packs seems interesting. I must admit that I didn't use items as much as I maybe should have, but maybe the item packs can encourage me to do otherwise.
hector212121
15

Maybe adjust the carry weight based on characters in party, too.
unity

Close
12/01/2016 03:19 PM
The thought that's crossing my mind in regards to this conversation is the inventory limits I put into Myraid Cypher. 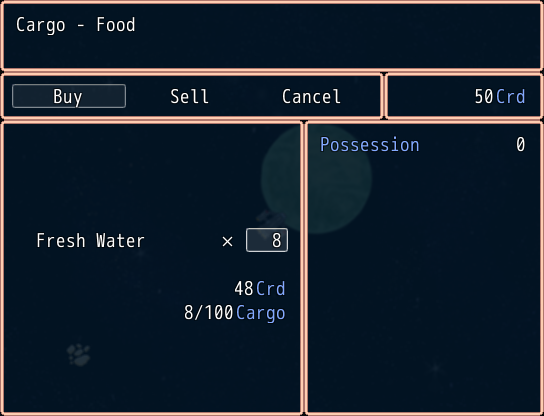 So, players would only be able carry an arbitrary total of X items. Now, in that game, the limit only counted things in the "Item" category, and did not count equipment, but, a similar limit might be what hector's talking about?
unity

Close
12/01/2016 03:21 PM
If that's what a developer wants to do, that's absolutely fine and it's a cool idea. But I certainly think it's very situational. I'm not sure that it works best for Prayer of the Faithless.
Marrend

Close
12/01/2016 03:25 PM
That's true! What worked for Myriad Cypher might not necessarily work for Prayer of the Faithless!
Red_Nova

Close
12/01/2016 03:35 PM
That system, while a good idea in and of itself, will not work for PotF. The problem of loading up and spamming healing and attack items and ignoring Drives and SP management remains, so the balancing will still be broken.

It's a cool system to keep in mind for future projects, but the one in place is how it will remain unless a major flaw presents itself in the future.
Pages: 1