Hello!
Drim (yesm Drim, not Dream!) is a 2015 RPG Tsukuru 2003 game by romantic-effigy, defined as a "pixel horror rpg about scissors and sisters" (not the pop band of 'I Don't Feel Like Dancin'!) because the adventure involves sisters, and also scissors, since these are the protagonist's weapon of choice. The game is pretty short, can be completed in 25-30 minutes and has two endings.

In this game we play as Scoria, a girl that is running away from... something! She hides inside a building that looks like a school and then, roaming the halls she tries to escape the buliding and find a way back home, collecting informations and fighing grotesque creatures. Ok, this time it's not that I just do not want to spoil the game, but it's also because the story is pretty vague and hidden, some things are plainly explained, while other details are left obscure. 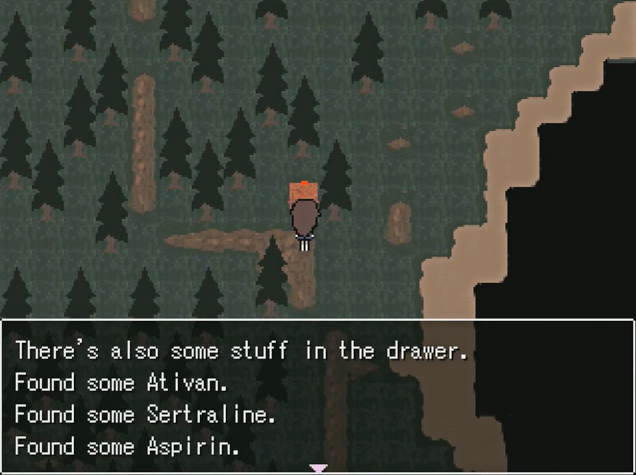 A drawer outdoor, in the middle of a forest? At least there is something useful! What a loot!

The gameplay is pretty simple, it's all exploration and combat, there are no puzzles or other activities. The battles are classic, but aside for the first one, most of them are pretty challenging for various reason. The most obvious is that we play as a single character and not one particularly suited to fighting, so this offers no advantage (enemies strike fast!) and limited strategy, second, it's because also the consumables are limited in quantity (plus there are no shops) and they provide little healing. This clearly made me want to avoid wasting time exploring of course. At least Scoris is free to learn new abilities and can also find some new clothes and weapons (various types of scissors) that can enhance her stats.
Unfotunately it does not help that the walking speed is a bit on the slow side... sigh! But yes, this is meant to be a slow game, that the player has to enjoy slowly taking its time.

BUT it's not all bad here! Music (not that there is a lot of music, but the game is pretty short anyway), sounds and graphics are all pretty good and custom made. In particular I liked the graphics that are cute & creepy, with a sort of stylized style that reminds to me of Carrionblue's game like Ghost Suburb II or I'm Scared of Girls whose protagonists have more than one trait in common with Scoria.
Maps are also pretty well made and full of particulars, there are also hideous creaturea and some nice moments, scenes or unexpected aspects of the game (I'll mention two: one is that at a certain point you can change Scoria's dress, nother is the part with the mirror!) that took me by surprise. 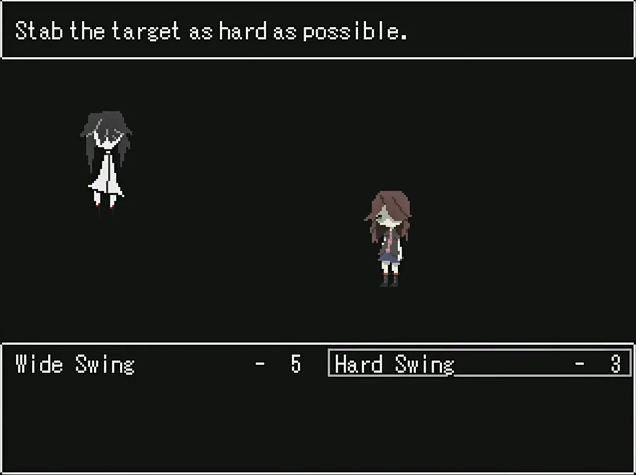 Scoria has to face some creepy enemies armed only with a pair of scissors!

Final Verdict
Drim is a cute game with a nice outlook, an ok and simple gameplay and a confusing story, or at least this was my experience. In any case this is not a bad game, nor a game for everyone, I'm sure that many players are amazed by the unique art style of the graphic assets, the symbolism of the story and the mystery behind it. Despite some flaws I found enjoyable, the interface is simple and clear, the gameplay is ok, I've played it just to see the two endings available. I'm not disappointed, this is surely not just an average game anyway there is not much else to say. Give it a try, you may like it!