Banana Mist was an entry for the 2015 IGMC, and like all games entered into the competition it was required to abide by a few rules and guidelines. The most important of which was it had to be made in a month, and should play for no longer than an hour, Banana Mist nails the guideline, coming in at around 25 minutes on my play through, and since I'm assuming it wasn't disqualified it also passed the made in a month criteria.

As with the games from last year's competition, there is a trade off that has to be made to make a vision of the game fit the timeframe. Certain sections the developers may want to include have to be scrapped, whilst others are given a higher priority than they might otherwise have done with more time. In addition the idea was to catch the eye of the judges so adding a hook or gimmick is a way of achieving that. Unfortunately for me the feature the developers of this game used is one I'm not fond of, voice acting. Every character in this game be they bit player or major role has a voice attached, and I find it really very distracting. Luckily for me there is the option to play without the voices, though I did give it a 10 minute run through with the voices before I restarted and played it without them.

I think the inclusion of voices did take away time the developers could have used polishing the game in other areas, and it does suffer because of it. One of the most obvious is the fact it seems to seesaw between jokey and serious. The entire premise of a world covered in a banana coloured and scented mist as well as the descriptions of said fruit highlighting its scatological properties is on the joke side of the equation. The fact the mist is bringing about monstrous entities who are killing people is not.

Still the game as it stands is what counts. You begin with a short exposition with the main character reminiscing about the world before the mist came. I would say golden age but given the colour palette used to signify the fog that could get confusing. 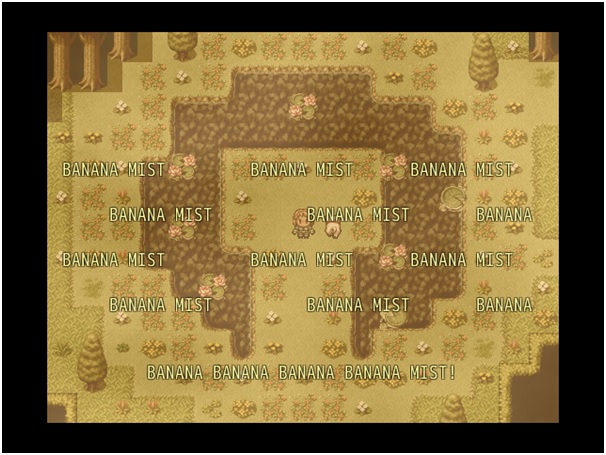 Just in case you missed it the first time...sorry.

So after waking up in a world suddenly tinted yellow and being accosted by a demanding mongrel dog you head out into the world to literally fetch the dog a bone. Whilst the graphics are all straight RTP the music is custom, but it's not particularly pleasing to the ears. Like the story line it seems to veer from upbeat and jaunty to eerie and unsettling. I think the developer was going for something haunting with the main map theme, but the voice of the singer is a little too prosaic to carry that off successfully. Speaking of the map, there is one supplied in the game, except it doesn't actually work; it's just an item you lug around in your inventory without being able to use it to reference the world around you. Though it does allow you to access a third ending, so taking it is a good idea. Luckily the world itself seems to mainly consist of two islands. The larger one on which you find yourself and a smaller one off the coast to the North East so getting lost isn't an issue.

So after taking a bone from an ogre's cave to feed the dog he joins the party, and then it is a case of wandering around trying to find out why the whole world appears to be covered in a sickly yellow fog. Not that anyone has actually asked that you do it and the Ogre seemed quite content to wait in his cave until it all blows over but being a main character does have its responsibilities.

Wandering around the world map are visible enemies who move in random patterns. They are easy to avoid if combat isn't your thing and seeing as how the game has level cap of 3 for the main character Quiana and no level increase at all for the dog, avoiding combat isn't a bad choice. If you do engage it's the standard turn based front view with no additional surprises. You get a couple of skills but no weapons or armour along the way that I discovered, though the developer has indicated that there are two hidden locations with armour and a weapon you can find, still I believe all in all combat is to be avoided.

There is one Podunk town on the mainland, consisting of 4 houses, an Inn and Pub and a defunct items shop. 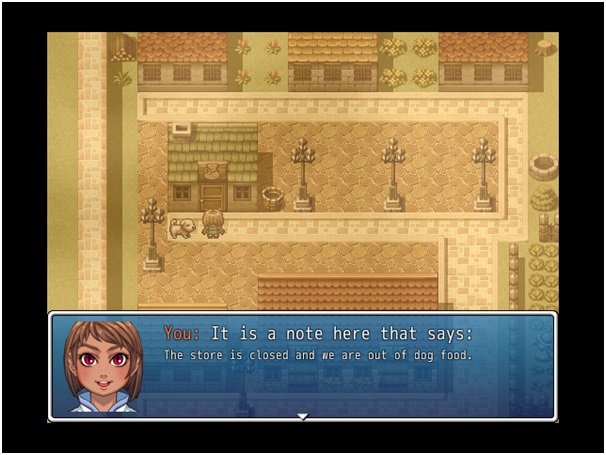 It's a good thing I already got him a bone then.

Why some place this small would have both and Inn and a Pub is beyond me, but then since none of the houses have doors, I imagine all the residents of the village have to bed down in the Inn at night, that or clamber in and out through the windows. The lack of attention to detail is quite astounding. Serendipitously at the Pub you happen to run into a ship's captain who is overly eager to gift you his ship so you can go and visit the castle on the other island and sort out this mist problem. Well at least you have an officially sanctioned quest now, so you can feel like you have a purpose.

So it's off on a short sea voyage to the castle on the island to have a word with the inhabitant, who remarkably turns out to be your king. Now I don't know about you but if I had a King, I'm pretty sure I'd not only remember his name, I'd remember he exists, but then again the game keeps referring to the main character as 'you' rather than her name, so it's par for the course.

Getting to see the King is the only part of the game that presents any diversity, with either a dance -off or battle to get past a guardian spirit and then a trek around the castle turning on crystals to gain access to the next level and the audience room of the king. It's not challenging by any standards and doesn't require any thought to complete.

An audience with the king soon brings certain realities to light, the most important being that his diet consists entirely of bananas and given their aforementioned scatological properties it becomes exceeding clear about the source of the mist.

Returning his lost dog, no explanation given how it swam the distance between the two islands, leads to a change in his diet and the world is saved from monster spawning banana scented nitrogen.

Basically the entire game is a badly executed fart joke.

Also the premise of this game is actually kind of lol.
nhubi

Close
10/31/2015 11:56 PM
The premise is, and if the game had stayed away from anything serious I would have probably viewed it in a less harsh light because it would have been consistent. Juvenile but consistent.

Oh and the dog did have a custom face, I should have mentioned that.
Malinda

Close
11/13/2015 01:25 PM
Thanks for your great review Nhubi... I agree with most of your comments however there are actually two different weapons in the game, the Heavenly Rifle and the Heavenly Armor that are hidden on two different locations and makes it possible to win against all the enemies, even the Ogre.

In our defence I would also like to say that the whole game was based on a dream that my friend had when she slept so therefore it has some logical glitches here and there... since dreams are not always logical in the normal way.
nhubi

Close
11/14/2015 05:04 AM
I never fought the ogre, he wasn't a threat and seemed pretty harmless. I'm not sure finding the weapon and armour would have made a difference since I hit the level cap without it pretty early and that's more what the issue is about. RPG's are supposed to have a feeling of progression and growth (especially this one since that was the theme of the IGMC). Unless you implement a specific system that is usually evidenced in levels/stats and with such a low cap there really didn't seem to be any opportunity for that. However I will amend the review to reflect that there was equipment to find.

Dreams are fertile soil, but yes logic does tend to be absent for most of them, unfortunately in a game that becomes a problem for the player. Still I'm glad you enjoyed the review.