Your mission, should you choose to accept it...

You'll have to excuse the stream of consciousness here, but, I seem to think better/clearer this way.

So, during RMN's down-time, I tried to piece together the first mission. Now, for reference purposes, there is a a bit of a story-skip, but, suffice to say, the Kamiyama is in orbit of the fifth planet of the Lintis system. Which is absolutely a reference to the protagonist of a certain other sci-fi game on RMN.

Anyway, the mission details that I've written say that there's an excavation site nearby an enemy outpost, and the party is to avoid a fight. Of course, that's not going to happen. In fact, I'm sorta planning on having two fights here. One involves the outpost being altered to the away team's presence, and another after they try to leave.

It's an okay plan, but, I just need to get off my lazy butt make all the maps involved. The thing that hangs me up the most is how to handle the first fight. Where is it going to be located? If it's an interior fight, that probably means that they are fighting in the outpost itself. I would need to figure out what a D-Enemy base looks like, and to keep in mind that it would be drawn to nakaishi scale. If it's exterior, that probably means reinforcements from the outpost, and whatever terrain features this planet has. I suppose one could argue that I do both (ie: the first fight is inside the base while the second fight occurs outside) and just be done with it already.


Though, I sometimes think I'd enjoy being more of a support person (such as tester, or what-not) than gammak. It's a thought that has occurred to me on several occasions, despite developing games with varying degrees of success (not to mention quality) since my Commodore 64 days. So, like, since I was 7. I figure I should at least finish the two games I've got floating, then I can seriously consider that thought.

Close
05/10/2016 04:51 PM
I know I've been horribly slow at this game, but, I'm in the process of mapping out Mission 1. Specific dialog/events are probably going to be dealt with later, though, I have a vague idea of what enemies are going to be encountered.

The awkward thing is that I don't have many plans beyond Mission 1! I... suppose I could put this back on hiatus and switch to Oracle of Askigaga in the interim? I dunno.
Marrend

Close
05/12/2016 02:08 PM
Here's a thing nobody asked for, but was bothering me quite a bit. So, weapons have a critical rate feature associated with them, and the game doesn't typically display that information on the equip screen... 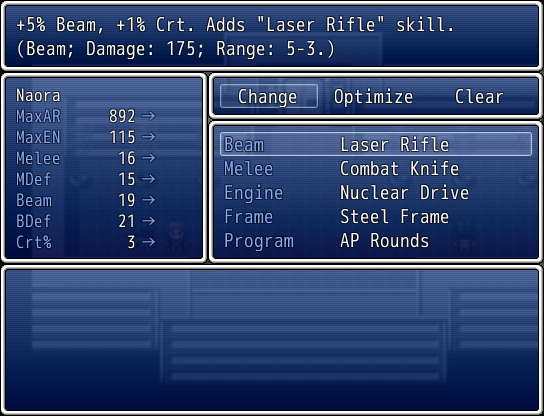 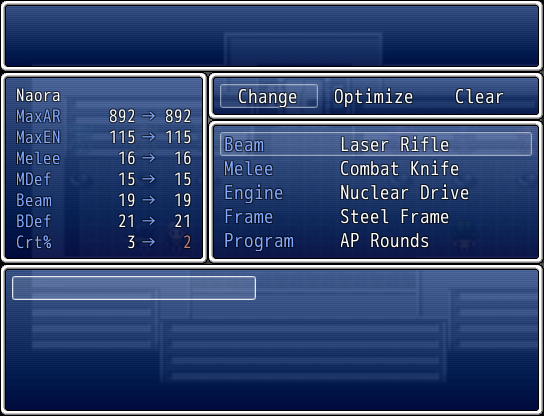 ...yes, the comparison function works for critical rate. I also wanted this information on the status screen... 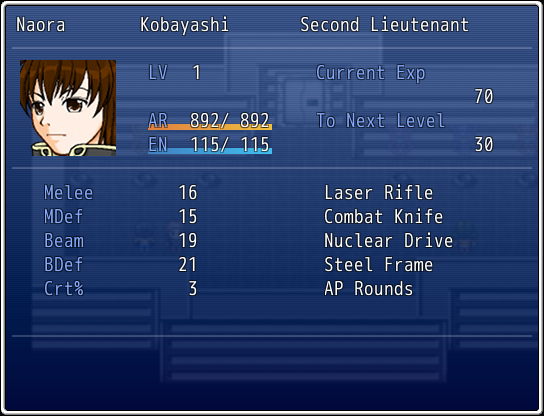 ...like so. I am perfectly aware that this has absolutely nothing to do with the first mission (Darigaaz, I'm still puzzling over how that sequence is going to even work), but, I'm stupid-proud of myself for this, and wanted to show it off. So sue me.
Pages: 1