Path of the Murderer

This is a killer concept...

Story: You play as a serial killer that just escaped from prison. Seven feet tall (210 cm), 300 lbs. (137 kilos), and armed, you are hiding in the woods terrorizing the community. Your goal is to simply kill as many people as possible without being spotted. You are basically playing Michael Myers/Jason Vorhees/Leatherface. 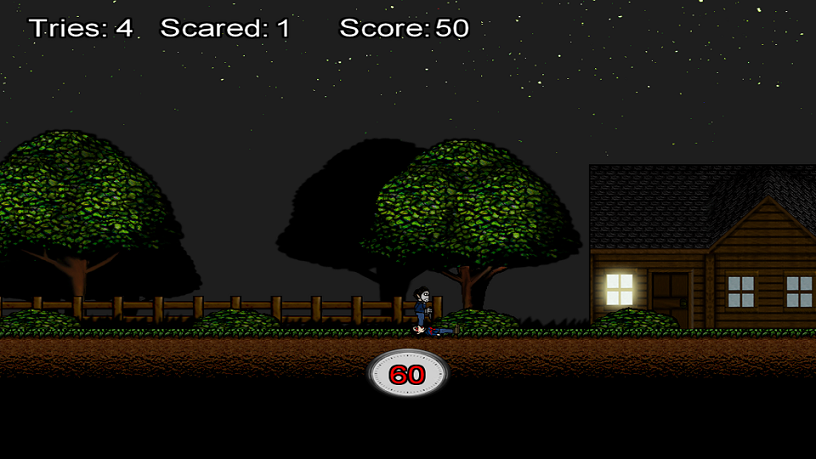 "I do wish we could chat longer, but I'm having an old friend for dinner."


Writing: Almost not applicable, but there is an opening blurb that basically reads like a police alert. What it says, I basically told you in the story section. That's it. That's all there is.

Gameplay: The concept of playing the killer in a horror game is one we've seen done well repeatedly with games like Friday the 13th, certain games in the Alien and Predator franchises, and a few of the Texas Chainsaw Massacre games. It's one of the few types of horror games I really enjoy because there's so few that let you be the bad guy. This takes that concept and just never goes anywhere with it. This one, as you can see from the screencap, is basically a generic take on the Halloween franchise: a serial killer stalking a quiet neighborhood. Unfortunately, this really does nothing with the concept.

The controls are simple: A and D to move left and right, W to go into hiding, S to kill. You can press space bar to jump, and double tap space to jump attack, but it's pretty unnecessary. The ability to jump adds nothing to the game, which is saying something because just about anything would add to the game. It's as bare bones as imaginable. You have a 99 second time limit to kill as many people as possible. There's about six to ten people per level that I've seen. Once you make it to the next level, your scores reset so there's no tally on how many people you've killed or how many points you've accrued, which is a huge bummer for a game where that would very likely be the whole point. It wouldn't be such a bummer if there was more to the gameplay. That simple control scheme should be all you need.

You have to kill people. If they see you, they will be scared off, so you have to stay hidden until you can safely sneak up on them. Then you kill them. There's no variety to the kill methods, and that's not a big deal. The whole thing about watching slasher movies isn't "will they are won't they". We know he's going to kill them, and we know only one or two will live to see the end credits. That's the whole formula, and knowing that formula is what makes most slasher movies boring. Therefore, the point becomes, "How will he do it". If you've ever read slasher movie reviews, the biggest points that are given are for setting, atmosphere, and how imaginative the kills are. But I understand that that takes some animation and complicated button pressing, and in a game this simple, it's a bit much to ask, but since it's a bit much to ask, don't be surprised that this game is going to be mediocre and will get boring very quickly.

And it does get boring. What could have spiced this game up? Consequences. Scaring somebody has the effect of running out of the level so that you can't kill them, which costs you points. That's it. There is no other consequences. Now, you see, if I had made this game, what I would have done is, get rid of that timer altogether, and change the stakes entirely. You HAVE to kill all the people in the level to get to the next level, but when you scare someone off, the police come, and you have to hide from them, and you have to kill them off without being shot. See that? Doesn't that basic alteration already sound much more interesting? Things to think about when making your game!

Graphics: Very nice. Not sure where they're from. It wouldn't at all surprise me to learn that the backgrounds and tiles are from a pack while the sprites and animations are custom. It's a perfect looking little slasher game.

Sound: The music is exactly what I would expect from a 90s platformer slasher game, and I strongly suspect nostalgia was a big factor in this game's design. You know the type of music I'm talking about: creepy, but not in that serial killer kind of way. It's the kind of music that sounds more like it would fit in a twisted, dark, version of a children's fairy tale. That's fine. It sets that kind of psycho tone for playing a murderer and I like it. The killing sound effect is simply the wet splash of cutting into a cantaloupe. The game is fun and campy.

Conclusion: I have no strong feelings either way. The game is certainly quirky, but it takes a good idea and doesn't go anywhere with it. If you're bored, it'll interest you for a couple of minutes, and then you'll be bored again.